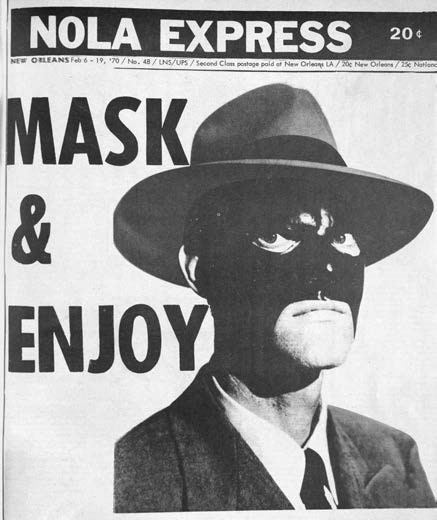 In case you aren’t reading the New Orleans Advocate—and you oughta be, if you’re looking for a solid local daily—a recent article by Jessica Williams is titled “’Assume you are being filmed’: Carnival 2016 to see record police surveillance, security measures.”

Williams quotes Jeff Sallet, the new head of the local FBI office, making this chilling threat to the people of New Orleans: “Assume that you are being filmed wherever you are and whatever you’re doing.” Sallett, who arrived here in November from Boston, wants you to know he not only has control of every camera in the city (public and privately owned), but has also installed countless additional temporary cameras throughout the metro area for the duration of Carnival, covering those hard-to-reach places where the Feds can’t rely on citizens to provide the level of intrusion the government demands.

Ms. Williams drily brackets this madman’s sinister pronouncements by quoting law enforcement sources  telling us there  are no specific or credible threats—that Sallet hasn’t even bothered inventing a justification for his reign of dystopian control over our city’s celebrations. Like most terrorists, Sallet is mostly bluster, but he’s nevertheless a terrorist. The purpose of instituting this level of paranoid mass surveillance and holding a news conference to brag about it is to spread fear.

Because I deplore terrorism, I hesitate even to amplify this maniac’s message, but I think it’s important those of us in New Orleans know what we’re dealing with. Ask yourself: what kind of human being would relish, as Sallet did, telling the population of an entire city he’s recording their every action, wherever they are, 24/7? It’s some supervillain shit, especially when you factor in Sallet’s background using what Williams calls “sophisticated facial recognition software.”

Mask up, New Orleans. Thanks to the ancient traditions, we are still free to cover our faces from the cameras. More than ever, if we don’t want our biometrics populating some petty despot’s databases, we must have recourse to the mask. When there is silence, the eavesdropper can hear nothing. Where there is concealment, the digital spies are blind.

For the elite whose interests are protected by laws, masking has long been a controversial component of Mardi Gras. Historically, whatever those in power here feared—people of color intermingling with whites, sex workers intermingling with respectable women, the poor infiltrating the celebrations of the rich—they feared masking at Mardi Gras might allow.

Now, in 2016, a newly-installed federal bureaucrat has made plain his intentions to invade your privacy, “wherever you are and whatever you’re doing.” We must build a resistance rooted in the old ways, the wild ways. If we are to enjoy ourselves, if we are to enjoy any of the freedoms Carnival promises without being spied on, we must mask.