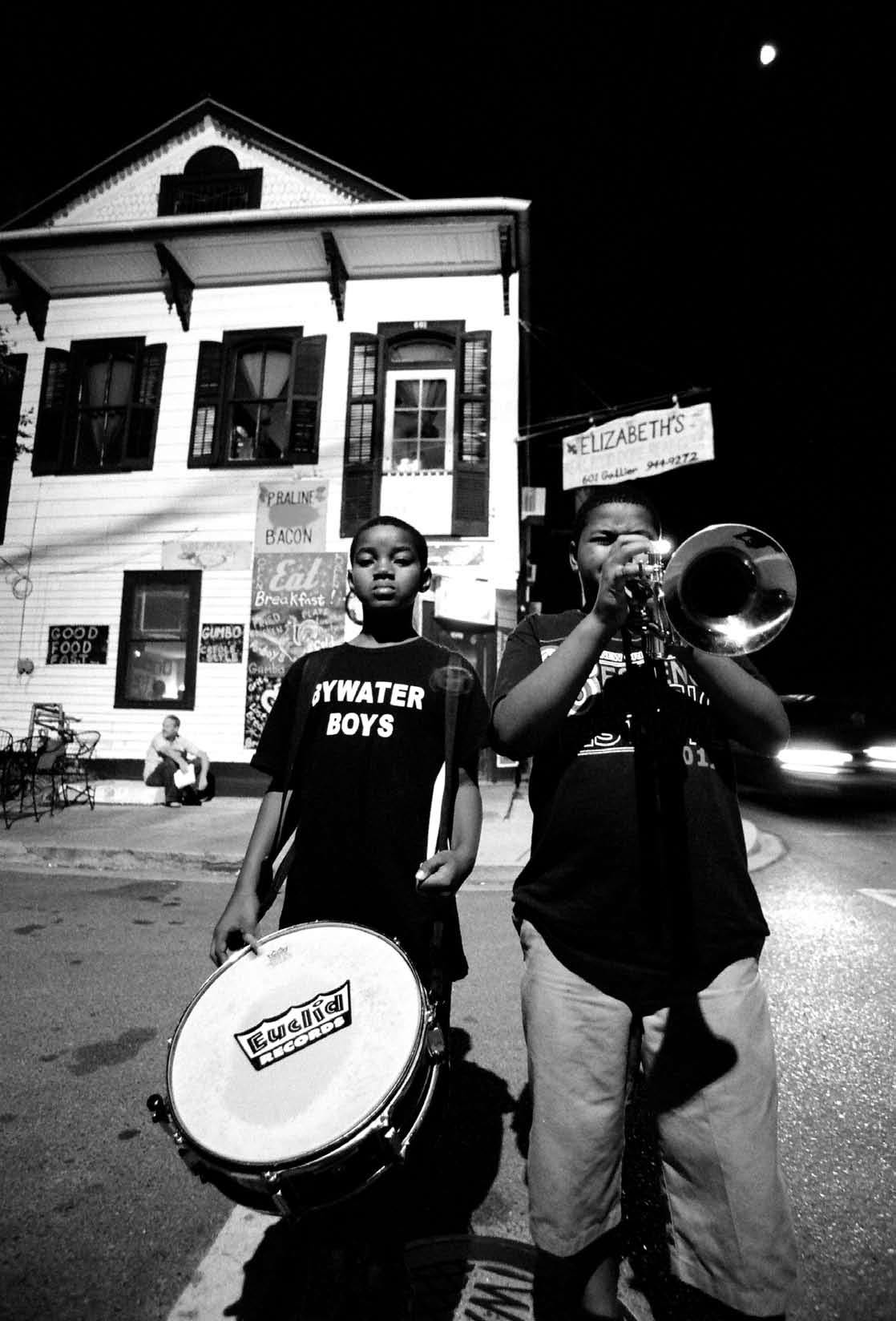 Often, when driving up Chartres Street in Bywater at night, across from Elizabeth’s restaurant, you will see the silhouette of a young boy pounding a drum kit beneath the traffic camera. Frank (age 11) and his equally dedicated trumpet-playing brother Tahj (age 12) are the only real justifications for the surveillance, as the brothers can almost always be found marching up and down some neighborhood street, rehearsing with their burgeoning band of kids, the Bywater Boys.

For the most part, the neighborhood supports and facilitates Frank and Tahj. They’ve fallen in with mentors like MC Trachiotomy [Jay Poggi] and the dance team Gris Gris Strut. The boys’ state-funded education at a local private school does not include music classes, so Sound Café provides Frank and Tahj (and several dozen other kids) with instruments, plus lessons from top-shelf musicians like trumpet hotshot Shamarr Allen. The owners of the kids’ favorite haunt, Elizabeth’s, invite the Bywater Boys to busk outside the restaurant during lucrative weekend brunches. The waitresses bring out blue Powerade in big cups with ice to the young crew.

But the boys cite Euclid Records – with its abundance of great music, tiny in-store stage and recording gear – as the main impetus for starting their band. A month ago the boys were excited to tell me the owners of Euclid had scored them a gig at Bywater’s annual Mirliton Festival. By the time we sat down for the interview, however, the boys were not on the festival’s poster. Euclid’s owners say the festival reneged because it did not have money in their budget for the Bywater Boys. The festival instead invited them to march around the grounds (aka the post-apocalyptic rubble yard across from Dr. “Be Nice or Leave” Bob’s place on Chartres), busking for tips.

Along with editor Dan Fox, I interviewed Frank and Tahj as well as their mother, Shanira, about the boys’ challenging quest to find serious bandmates, their many managers and their quasi gig at this month’s Mirliton Music Festival. Also, money. Lots and lots of money.

How long has your family lived in Bywater?
Tahj: 5 years.

Who are all the other members of Bywater Boys?
Tahj: There are 6 members: guitarist, bassist, another trumpet, Ray’shawn plays tambourine and cowbell and James plays snare drum.
Frank: And a cymbal. There are 7.
Tahj: Oh yeah, we also have a little mascot dancer with a tambourine.
Frank: We are also trying to get a tuba player.

How do you know the other members?
Frank: Just from living in this neighborhood. That’s why we’re called the Bywater Boys.

Didn’t Dr. Bob give you that name?
Tahj: No, I made it up. One day we were playing and I said, “We’re in the Bywater, and we’re boys, so we should name our band the Bywater Boys.”
Frank: Dr. Bob just bought us our shirts.

[to Mom, Shanira] The boys tell me they love their school but that it doesn’t have a music program.
Shanira: It’s a small school but they’re learning real good and they been there 3 years. It teaches them Bible. God blessed me with Bobby Jindal; he pays tuition for those guys and that’s a great thing to have because I can’t afford private school. They give these guys a scholarship every month that pays their tuition. I hate that they don’t have music but I thank God for the Sound Café.

Boys, tell me about studying music at Sound Café.
Frank: We go down there on Tuesday nights. Sound Café helps us read music; we set up our chairs and we read music and play it. Silence is Violence helps them. And Shammar says that if we don’t practice, then you don’t get to bring the trumpet home or something.
Tahj: But I’ve had my own trumpet for like 3 months now.

I thought you played the trombone, Tahj?
Tahj: I play both. I am learning drums… I am trying to learn everything. Because I am trying to be like Shammar.
Frank: At Sound Café I am learning the drums. But I play trumpet and the other day I played a tuba. I play trombone. I played bass drum, snare drum. I play cymbals. I rap, I sing.
Shanira: I am so blessed to have those people at Sound Café helping my kids. They’re learning more and more and they’re turning other kids on to it. It’s making them responsible, because they have to be there at a certain time. It’s maturing them up. It’s a blessing.

How long have you two been playing music? How did you start?
Tahj: I got turned onto music by my older brother who plays the saxophone. I played his saxophone but then I wanted to play the trumpet.
Frank: Since [Euclid Record store] opened. Mr. Jay [Poggi], who lives by the record store, he has drums and stuff and that’s how I got turnt on, when I picked up his sticks.

Dan Fox: How did you meet Jay Poggi?
Frank: When we moved here, he had a fruit stand outside of his house—
Tahj: And we were walking to the park.
Frank: And we went to go get fruit and we shook hands; and that’s how we became friends. And he would always ask about how we’re doing in school. And he said he was going to build a recording studio. And he has wallpaper if you need some.

Dan Fox: Did you think he was a little weird when you first met him?
[both nod, smiling]
Tahj: Still.
Frank: But weird in a nice way.

So Euclid Records is sort of a home base?
Tahj: We shot a rap video up in there.
Frank: But that’s with our other band Lemonade Mouf [Lemonade Mouf is a reference to the 2011 movie musical Lemonade Mouth, based on the Mark Peter Hughes book]. That’s just me and my brother.

What type of music do you listen to?
Tahj: We don’t really listen to music at home. I listen to rap in the car. At the record store I heard [records by] the 9th Ward Marching Band and St. Aug Brass things.
Frank: I love the record store.
Shanira: My speaker is messed up so we haven’t had music for a while. Before that we would listen to jazz, r&b, a little bit of rap but not too much rap. But gospel. Positive music. As soon as I get some money I’m gonna buy us a new radio – I’m gonna have to surprise the boys, since they say they feel that way…

Describe the Bywater Boys’ music.
Tahj: We do all types of music. We do a little brass. Everything. We do songs from other people. We do “Second Line,” “When the Saints Go Marching In,” “Bourbon Street Parade,” “Summertime,” “Treme.”

Is everyone in the band as serious about it as you two? It always looks to me like you are sort of the bosses of a revolving cast of kids.
Tahj: We only had one person quit. This person, he took $5 from us. And we put him out of the band.
Frank: This one kid, Kaywan, used to come by his grandma, but since school started we haven’t been seeing him.

How did you all settle on that spot right outside the traffic camera?
Tahj: The owner of Elizabeth’s, when we first started having our first movie we did on YouTube, he put it on there with some nice words and he said we could play over [at Elizabeth’s] on the weekends.

Didn’t Dr. Bob used to be your manager?
Tahj: No.
Frank: Kinda. He bought our Bywater Boys t-shirts. He was trying to get us gigs.
Tahj: He got us a gig at an art gallery downtown. We made a lot of money. But we don’t go down [to Dr. Bob’s] a lot now. Jay Poggi is kind of our manager now and so is our mom. A lot of people. We have like 4 managers.

Tell me about this Mirliton Fest situation.
Tahj: The festival called the record shop. We didn’t actually hear from them but Mr. James at Euclid who who wear s g lasses—
Frank: He said they’d pay us $75. But then they turned us down.
Tahj: Now we are going to walk around during the festival and try to make some tips. And maybe it’s going to be more than $75.

That’s more than a lot of bands make.
Tahj: One time they had a party upstairs at Elizabeth’s. The people asked us to play and we made $136. And then the next time we made $90 when we played upstairs. We did good.
Frank: One time outside Elizabeth’s we made $100 in like 5 seconds.
Tahj: We just started playing and they gave us $100. And we were done playing for the night.

What do you do when someone gives you a hundred dollar tip?!
Tahj: Save it.

Dan Fox: You guys are more put together than than most adult bands.
MPW: [to Shanira] Yeah, your sons are just exceedingly smart and polite.
Shanira: Well thank you. I see the difference in other kids their age: they cursin, breakin stuff, goin to jail. These boys is… man, I love it.

Where else can we see Bywater Boys? You all playing anywhere else besides Mirliton?
Tahj: Well, it’s kind of hard to get gigs. Because we’re, you know, kids.