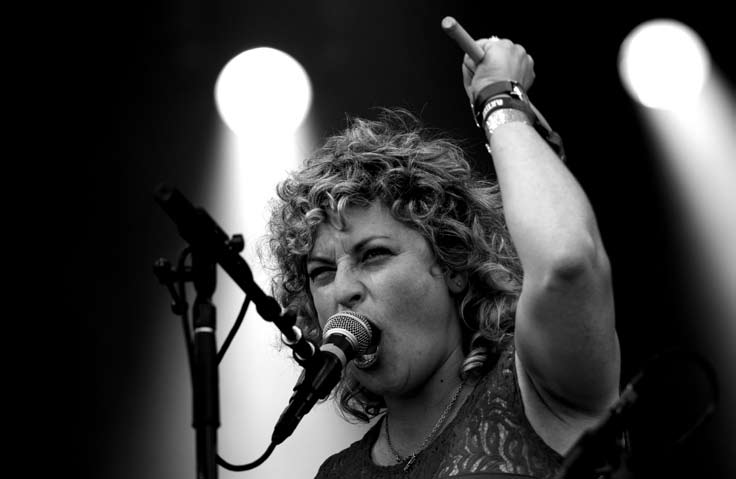 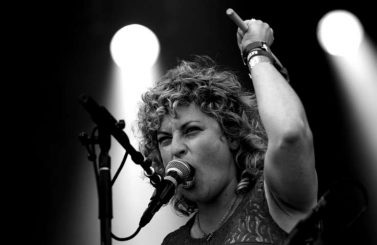 The highlight and first set of Saturday was South Carolina husband-wife duo Shovels and Rope, who played a strong set at the Hangout mainstage. Michael Trent and Cary Ann Hearst’s casual banter made us feel like we were in their country living room. They commented about the state of their equipment (“We’ve got a funky DI,” “Brother Brad, can I have more acoustic guitar?”) and flirted with each other (“Michael, you clean up good for the beach”). During their set’s most intimate moments, the pair shared a microphone, their foreheads touching as they leaned in to sing. Meg and Jack White jumped into my head as a comparison, except for a very (notable) difference beyond the music: the effervescent personality of Hearst. She wore a cherry red, A-line dress and was the more talkative of the two, flirting with her husband and the crowd and reminiscing about her days visiting the Redneck Riviera. —Kate Russell 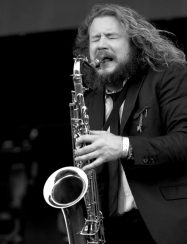 Jim James’ set was the highlight of Friday. His sound is very different from My Morning Jacket—it’s heavier, more dramatic and more sophisticated. His entire band wore suits. There is nothing classier than a band in well-tailored suits. During his set, James used every inch of the stage—mugging for the cameras, twirling in circles, and even waltzing with a panda statue. The stand-out track was “State of the Art,” a lively, introspective track from his new solo album Regions of Light and Sound of God. —Kate  Russell

Tom Petty is, like the Black Crowes, a good standby. The man will always put on a great show and people will always sing along and dance and drink (and smoke…

a lot). He pulled tracks from throughout his vast catalog and while the closer “American Girl” will remain an absolute favorite of mine, I also really enjoyed the stretched-out trippy take on “Don’t Come Around Here No More” and the down- tempo “Rebels.” —Erin Hall

I want to be Karen O. when I grow up. She has elevated the weird kid banner to beautiful, poetic heights. Sporting a bedazzled t-shirt with a Michael Jackson appliqué under a jacket bearing what can only be described as “David Bowie shoulders” and matching shorts in an iridescent reptilian pattern, she made it quite clear that she came to perform. Seemingly overcome with the glee of it all, the YYYs tore through some of their strongest material (“Pin,” “Phenomena,” and “Honeybear” were favorites of mine) including a few tracks from their recent release, Mosquito. Nick Zinner delivered the raw, nasty guitar my weekend had been so sorely lacking, while Karen took to deep-throating the microphone while arching backwards, her bleached-blonde hair nearly sweeping the stage. The energy was electric and constant, leaving much of the crowd feeling desperate for more time in their set. Always leave them wanting more. Mission sweetly accomplished. —Erin Hall 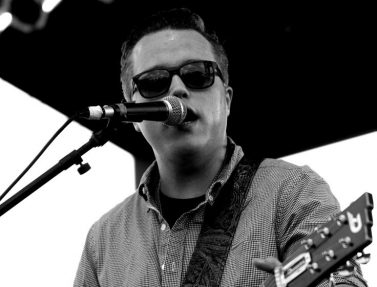 Jason Isbell should draw bigger crowds. It’s a simple reality. But when you’re up against a former indie darling that may be mounting a resurgence (Bloc Party) and the godfather of widdly-wah jam nonsense (Trey Anastasio) you’re bound to have limited numbers. All of those people who chose to be somewhere else, however, missed one hell of a performance. Joined by his now-wife, fiddle player Amanda Shires, and his band The 400 Unit, Jason ripped through a set of favorites from his Drive-by Truckers days as well as material from his last few albums and even a few tracks from his soon-to-be- released solo effort Southeastern. The addition of fiddle to the tracks gave them a welcome injection of warmth and aside from a few loudmouths in the front corner of the crowd, everyone seemed quite invested in the moment. He tapped a frequent favorite cover as his closer in Neil Young’s “Hurricane.” As usual, though, the biggest crowd response came during the songs he penned while with the Truckers, especially “Goddamn Lonely Love,” “Decoration Day” and the perennial favorite, “Outfit” (which he brought out incredibly early, as just the second song of the set). Having always associated that song with my father and having stood by his bedside less than 48 hours before (following open-heart surgery), it was an especially poignant moment for me. Fitting that it was a Sunday, as Jason Isbell took me to a sacred space. And I will always be grateful for music that does that. —Erin Hall