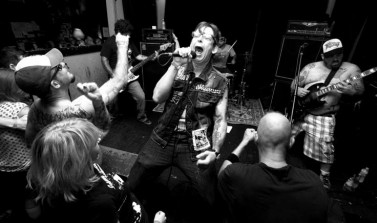 Bill Heintz  is a busy guy. He’s one of  the masterminds behind Creepy Fest, a four-day-long local hardcore and punk music showcase that stretches over seven music clubs throughout the city of  New Orleans. Virtually  every aspect of  Creepy Fest has Bill’s involvement, from the design and execution of the posters and t-shirts  to booking the huge roster of  bands and playing in a handful  of  the scheduled acts. A prolific graphic designer, his art has graced hundreds of fliers, album  covers and of  course all official Creepy Fest promotional items (as well as last month’s ANTIGRAVITY cover). He’s also an in-demand  musician in hardcore punk circles, playing drums for The Pallbearers, (who are celebrating their 17th  anniversary this year) The Split () Lips and Dummy Dumpster. He also plays guitar in The Bills,  which are closer to old surf  or garage music than the aggression of  hardcore punk.  I was able to get a moment out of  his schedule—literally right before a band practice—to  ask him just how and why he does it all.

I know that Creepy  Fest has something to do with local underground film studio TerrorOptics; can you give me some info about the connection?

Bill Heintz: Basically, that’s how it all started. The first year of Creepy Fest, me and my buddies in TerrorOptics had just finished a film called Creepy Dean, and for the soundtrack we had used music from a bunch of local punk and metal bands. We had about 13 or 14 bands the first year and we put them on the soundtrack, so it was really a CD release festival to promote the bands, the movie and the soundtrack. We would show the Creepy Dean film  at each of the gigs for that first fest and it just kind of kicked off from there. Now it’s a big punk fest but we still incorporate short films as well.

Considering that TerrorOptics has films  currently in production, will the acts at this year’s  Creepy  Fest be featured on soundtracks for upcoming features?

We are working on Attack of  the Cockface Killer Part III, but when it comes to the soundtrack, we would really only include local bands. Basically over the years we have incorporated out-of-town bands, bands that just seem to be touring through at the time. So I’m usually booking the fest around February, right around Mardi Gras. Once I get the clubs to sign on, the bands come next and a couple of months later it’s time to start promoting the show.

There’s definitely an emphasis on local New Orleans acts. Is this a deliberate booking policy, or does  it just happen that way because of how many  bands are actually here  in town?

Sort of. I mean, the original purpose was just to have an annual punk music festival in New Orleans. You have a lot of bands that will break up, then re-form; or members of a few different bands will start a new act, so Creepy Fest is a snapshot of where the scene is at that year, at least. We do purposely use a lot of New Orleans bands; we want it to be a big local show. But like I said, we do have some touring acts as well.

Seeing  as how Creepy  Fest has hosted almost every working hardcore punk band in New Orleans over the last five years, what’s  your take on the local scene here?

I feel like right now it’s great. In the last couple of years it’s snowballed;  there’s a lot of new bands, a lot of genre-crossing, which is good. After Hurricane Katrina, it took a few years for everything to fall back into place, but now I think it’s going really strong. I mean there’s definitely shit to complain about, [laughs] but I try to look on the bright side. Overall though, I’d say things are going really well right now.

Because you book Creepy  Fest over a weekend and through  multiple clubs, are there  specific venues that you work with every year? And considering the fact that hardcore music isn’t exactly  popular with some people, do they always welcome you back?

I’ve stuck with the clubs that have been good to the bands over the years: Saturn Bar, Checkpoint Charlie’s, Dragon’s Den, Siberia, The Big Top and Circle Bar. Those are the same clubs we were at last year, so it’s sort of stabilized. We don’t really want to move into the big venues. I think the heart of the scene is seeing a show at two o’clock in the morning, you know?

What are some of your favorite moments from past Creepy  Fests?  And have there  been  any bad experiences? Anything you wouldn’t want to see again?

It’s hard to say. They’ve all been great and I tend to look at it as a big picture. The lineup of bands gets better every year and just seeing it all go off well, with everyone having a good time makes it for me. With a festival like this, you know there’s going to be a lot of chaos. I’m used to it. The only thing I haven’t liked was last year when the city started going after clubs about music permits, then shut down one of the clubs we work with. So we had to move the entire schedule over to another bar, who were cool, but they’re not really into punk rock so… [laughs]

Since Creepy  Fest is so linked to TerrorOptics, have you guys ever tried to record the fest? Maybe  release a live CD or DVD?

Yeah, I’d love to do it, but it really comes down to a financial issue. Our sponsors help us with promoting the show and the gigs really pay for themselves so there’s not much left to work with afterwards. This isn’t a financial-gain sort of thing anyway. But I would love to put out something like a Creepy Fest sampler every year. It’s just a matter of time and money.

You’re involved in almost every aspect of production for the fest.  How do you find the time  to do it all?

Things have just taken off over the years. I definitely don’t get a lot of time to rest. It’s all stuff I want to do, so that’s my motivation for doing it. I mean, I could sleep, but then the CDs come in the mail or the fliers get printed and I’m going again. I usually get some time after Creepy Fest though, that’s when everything seems to come to a head.

Creepy Fest will be held on July 11 through the 14, all over the damn place. For a detailed list of bands, dates, times and places, check out facebook.com/creepyfest