As a print publication, it’s easy to find solidarity with an event that celebrates another outdated but beloved medium, the vinyl record. Every year, Record Store Day promises a mini-Christmas miracle, for the record collector and shop alike. For this year’s RSD, we sent out a few AG writers with a meager budget of $25 to see what they could grab around town. As with all collecting, there were dreams and disappointments—here’s quite a few of each.

Record Store Day can be a bit of a self-conscious experience if you let all the hype go to your head. There’s a lot of pressure to get the perfect record. With so many classic re-releases, unheard live and studio recordings of musical legends, and obscure world music compilations to choose from, it’s hard to land on exactly what you set out for without breaking your budget. But there is no such thing as coming home with the perfect record; and the clerk doesn’t give a shit whether you purchased Slipknot or a Jerry Garcia re-release, it’s all just money in their drawer and tunes on your shelf at the end of day. So take to heart the words of this year’s Record Store Day ambassador, Chuck D: “Don’t believe the hype,” and just buy the music you like.

I spent my Saturday morning at the Mushroom. Like most record stores that participate in Record Store Day, the place was a mob scene for the first 20 or 30 minutes of being open. I still managed to get in there before the place was picked completely clean. There were a few items I had in mind before entering the store, but none of them were on the shelf. Not to panic— still plenty of good stuff to choose from.

The Dead Head in me wanted to buy the Grateful Dead Live at Hampton Coliseum, but the penny pincher in me couldn’t spend $40 on one record.

After much contemplation, passing over the Jimi Hendrix Experience Live at Monterey, I landed on two records. The first was 7” Satellite of Love (songs from the original motion picture soundtrack Mars). This Neko Case cover of the Lou Reed classic seemed to be a fitting purchase on the first RSD since his passing. The B side featured “Lucky Star Love” and “Untethered Space Walk.” I was immediately pleased with my purchase upon first listen. I’d call this genre indie-country-space-twang if I had to put a finger on it, but who needs boxes for music like this?

The second album I picked off the shelf was The Rough Guide to Voodoo. Every year I’m intrigued by all the international compilations put out by Rough Guides on RSD, but I usually pass on them. This year, being the good Catholic I am, I figured I’d buy something religious for Holy Saturday,  the day before Easter. This compilation featured religious-themed music from Haiti, Cuba, Trinidad, Benin, Brazil, and of course, New Orleans. The first side was good, but the B side was definitely better. If all church music was like this, I’d be at mass every Sunday. —Robert Offner

I had a blast on April 19th running around to various record stores in New Orleans, scooping up vinyl exclusives to Record Store Day. The weather was perfect and the city was pulsating with Jazz Fest around the corner. My biggest lot came from the newly relocated New Orleans Music Factory, now on Frenchmen Street after a longtime, successful run on Decatur. This was my first opportunity to scope out the new digs and I was impressed. The shop was well organized and had a whole slew of RSD releases greeting you upon entrance. Customers from all walks of life filled the aisles on the prowl for a boss slab of wax. Alexandra Scott’s live in-store performance of Paula Abdul’s “Straight Up” on banjo certainly made for an interesting shopping experience!

There were so many exclusive releases I was hunting, but the Meltdown With The Ramones EP on Rhino Records was first on my list. It’s not every day that your favorite band releases a record! The four-song album was originally a 7” released in the UK in 1980. Now, in 10” format on navy vinyl, running at 45 rpm and limited to 5,000 copies, the songs boast a crisp and polished sound. All of the songs had been previously released on full length LPs, but this particular selection creates something truly unique. My favorite track, “Questioningly,” makes for a great closer on this somewhat sappy release.

I was also able to nab a 7” from one of my favorite guitar players, Link Wray. The Slinky/Rendezvous 45 reissued on Sundazed Records makes you feel like you’re at a hootenanny in an early John Waters movie. Both sleazy instrumentals bear the raw energy and delinquent attitude that make Link’s music so easy to identify. Another  Sundazed reissue that I picked up was the classic debut EP from Minneapolis garage pioneers The Litter. With heavily fuzzed out guitars, pounding drums and bitter yet optimistic lyrics, “Action Woman” serves as a great example of what ‘60s psychedelia was all about, while the flipside, a cover of The Who’s “Legal Matter,”  compliments it perfectly. Taken from the original reels, the record kicks at a higher volume than most. The 7” was originally released in January 1967 on Scotty Records, but is beautifully reproduced here on blue vinyl with a rare band photo donning the front  cover. Both of my Sundazed purchases are limited to 2,000 copies each. 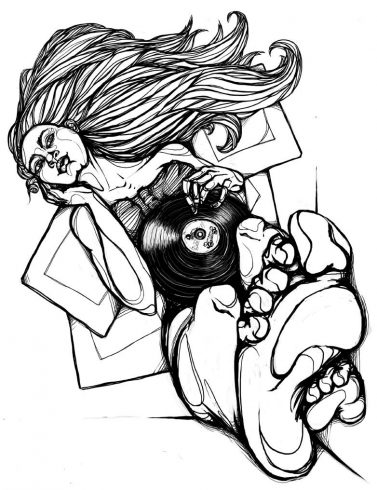 I tried desperately to find a copy of the Sonics/Mudhoney split 7” but it seems that was one of the harder ones to get. No matter though, I thoroughly enjoyed the pursuit and am extremely pleased with my scores. I buy music throughout the whole year, but Record Store Day really makes it fun and offers the collector a chance to pick up some true treats. I’m already looking forward  to next year! —Bill Heintz

I was going to have to be up bright and early if I was to be anywhere close to the front of the line when Skully’z Recordz opened their doors at 9 a.m. Despite a brief delay in my commute— due to the Crescent City Classic—I was on queue at 8:30 and still in position to snag some of the goodies on my list. As someone who would have to be at work in an hour, not only did I appreciate the early store hours, but I also appreciated their system of letting in 4 to 5 people at a time as a way to a) help/serve everyone efficiently and b) tame what could become madness otherwise.

The first item on my list was a coke- bottle clear Mazzy Star 7”— “I’m Less Here” b/w “Things.” Structurally, both songs are simple enough, but it’s Dave Roback’s creamy guitar tone and Hope Sandoval’s honey voice that will drag you from ‘light-hearted’ to ‘tearing your heart out.’ Like the full length (Seasons of Your Day) released late last year, there are no big surprises here—just the songwriting and signature sound over which loyal fans are still drooling. My next big score was a Nina Persson 7”— “Sometimes” b/w “This is Heavy Metal.” Persson is the voice behind the Swedish-pop darlings, The Cardigans. This RSD release is an accompaniment to her first solo album that dropped last month. Like the white vinyl itself, these songs breathe a sterile vibe—both are light, airy, and pleasant enough. I just feel like every time she ventures into a new side project, a lot of the magic, charm, and songwriting gets left behind in the old “sweater.” Still a great find for any fan. Next on my list was the reissue of Fishbone’s self-titled debut album. Thanks to a helpful fellow patron, I was lucky enough to snatch up the only copy on hand. This album brought me back to a time when I was discovering music and wanting to create my own. The energy on “Modern Industry,” “Ugly,” and “Party at Ground Zero” are undeniable feats of eccentricity. When introduced, I had never heard anything like it before, and at the time of its original release in 1985, neither had anyone else. And finally, before checking out, I couldn’t resist picking up a copy of Oracular Spectacular (reissue), the breakout album from indie electro-pop duo MGMT. Admittedly, I was late to the MGMT party when it originally broke in 2007, so now was the prime opportunity to recapture that magic on sweet, sweet vinyl. —Kevin Comarda 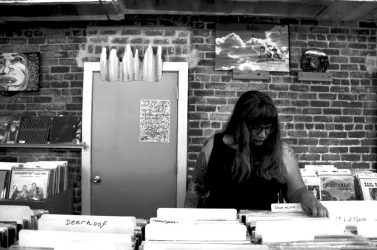 If my apartment were as nice as Euclid Records’ new digs, I’d throw a party with lots of cool music and plenty of free beer and hot dogs. But I don’t have to, because last month was Record Store Day and they did it for me. Euclid’s New Orleans outpost recently moved to a brighter, more welcoming space one block upriver at Chartres and Piety. It’s got two floors, you can smell Pizza Delicious from the backyard, and you don’t have to get on your hands and knees to browse the 7”s. Perhaps most exciting is the in-store stage, now with some much-needed space for the audience. It doesn’t feel as lived-in as the old store, but give it another month.

Record Store Day is Euclid’s biggest day of the year, but the vibe feels more block party than Black Friday. I arrive at 10:30 to a sizable and very congenial line. Store manager James Weber tells me the earliest birds turned up at 7:30, waiting three and a half hours for first crack at Euclid’s selection of Record Store Day releases. It’s not a bad strategy if you absolutely have to have it, since Weber estimates he received 95% of the exclusive titles he ordered but just 60% of the inventory.

Alas, the Black Lips’ 2,000-copy single “Funny” is in the 5% (“We got shut out,” Weber says grimly). I grab Parquet Courts’ vaguely Britpop ripper “Sunbathing Animal” as a consolation prize. In lieu of a sleeve, it’s packaged in its own sheet music.

I find this brilliant ( because it’s even more retro than vinyl) and hilarious,  because sheet music to Parquet Courts  includes ten bars of a single chord. Initially I pick up “Brightside” by The Julie Ruin for its cover, a photograph by feminist contemporary artist Becca  Albee. I like it just for that, but when I take it home I immediately fall in love with the mellow and sentimental b-side “In the Picture.”

My favorite thing after punk is insufferably pretentious elevator music, so when I heard about The Space Project from Lefse Records, I knew I’d have to get a copy. For this special release, the label invited The Antlers, Beach House, Spiritualized and more to create original songs incorporating electromagnetic radiation fluctuations recorded by the Voyager spacecraft. It sounds like a boutique hotel lobby on the moon. I’m excited to own it on vinyl because I can play it backwards anytime I want and it makes me feel spiritually closer to Carl Sagan.

For my final pick, I grab Euclid’s last copy of Actions Speak Louder Than Words, the 1975 debut by New Orleans’ own Chocolate Milk. The band recorded their funky, sultry, politically-  tinged R&B album at Allen Toussaint and Marshall Sehorn’s Sea-Saint  Recording Studio in Gentilly. Newly reissued on milk chocolate-colored vinyl, it sounds smooth and delicious. I’ve heard it argued that eliminating reissues would calm the worst of Record Store Day consumerist hoopla, but then I’d miss my chance at this slice of classic New Orleans groove. If I had to complain about it, I’d say Sony really ought to be able to give me a download  code. It is 2014. But I think I’ll put on a record. —Anna Gaca