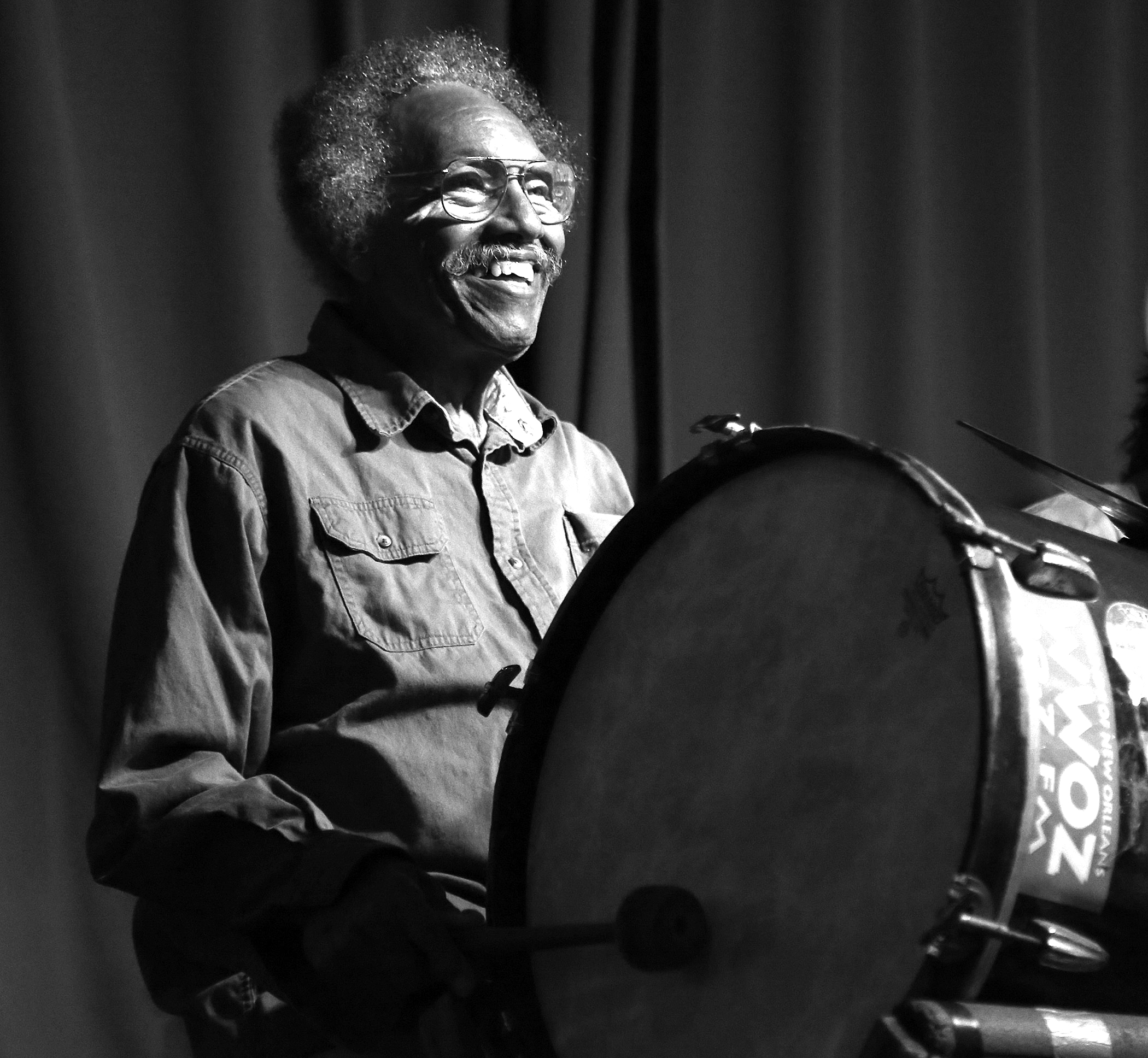 It’s a hot July Saturday morning in the Treme, and the Baby Dolls are out in their fanciful dresses, decorated umbrellas, and fine shoes. Dirty Dozen Brass Band founder Roger Lewis is leading a group of musicians playing traditional jazz outside of the St. Peter Claver Catholic Church, where family members and friends of Lawrence Batiste, local drummer and embedded member of the Treme community, have met to pay him their final tribute.

Several younger musicians who he had befriended in recent years, including myself, are also in attendance. During a touching eulogy, his pastor, Father Emmanuel Mulenga of St. Augustine Church, recounts to the audience how Lawrence would stop by on his way home, supposedly for a few minutes, and they would lose track of time during passionate conversations about history, learning about each other’s cultures, from his native country of Zambia and Lawrence’s own.

Listening to this story, I am immediately transported back to another blisteringly hot summer afternoon, when I was waiting for a streetcar by City Hall in the Second Ward—Batiste and Louis Armstrong’s native neighborhood. Suddenly, I heard a voice calling my name and turned around to find Lawrence’s bright smile behind the wheel. He was taking his son Antoine back from his doctor appointments, and he told me to hop in. I spent the afternoon driving around town with him listening to stories about the places where he grew up. He showed me all around the Treme neighborhood where he used to be a paperboy and the bohemian cafes in the French Quarter where he hung out with white beatniks, in defiance of the segregation laws of the time.

Lawrence Batiste was inspired to play the drums after watching the kids from the Warren Easton band playing in the Jolly Bunch Social Aid & Pleasure Club parade. Later on, after his family’s forced relocation, he got to meet the Treme neighborhood’s musician elders such as “Uncle” Lionel Batiste’s family, which deepened his interest in the culture, music, and history of his community.

Although he started practicing at an early age, his musical career took off later in life. After returning from military service in the early ‘60s, he started hanging at Preservation Hall and learning from older players while supporting his family by working on refrigerators for Sears and Roebuck. Eventually, he developed his own musical style and, through his own perseverance, was able to get steadier gigs.

In recent years, Batiste’s commitment to tradition kept him close to the younger generation he charged with passing it on. He often met the musicians he came to mentor onstage where he would occasionally sit in, as Swamp Kitchen bandleader Nikolas Snyder remembers. “I was playing with Chris Christy in front of Cafe Rose Nicaud and Chris invited him to play. After hearing the way that he played the drum and the unmistakable joy that it brought him—ever since that moment I’ve had a deep connection with Lawrence.”

For singer Melissa Jane Pandiani, learning from Batiste was an amazing opportunity to deepen her craft. “When I first started Little Coquette Jazz Band,” Pandiani recalls, “Lawrence heard us at one of our first shows and believed in my singing enough that he immediately offered to be in my band. I was really unsure of how [or] if I fit playing traditional jazz music in New Orleans and getting encouragement from such an incredible and established local icon really meant a ton.”

Though Batiste’s teaching style mostly consisted of leading by example, his occasional notes were always about more than finding the right technique. “When I first moved to New Orleans I’d tend to play with my eyes shut, focusing on the rhythm to the point of overthinking it,” says Snyder. “On one of the many gigs I played with Lawrence, in the middle of a song we made eye contact and he said to me, ‘Now you got it! You’ve got your eyes open and you’re enjoying yourself. That’s what it’s all about!’”

Such dedication during the later years of his life is even more impressive knowing Batiste had also become the primary caretaker for his beloved wife and son. He seemed to always find time for his family and community, including Pandiani’s students. “After playing with him a while,” she says, “he offered to come to the school I worked at and teach the students about drums. I also found out that he took care of his son and his wife and that his weekly habit was putting everyone to bed, and then around 8 p.m. heading to the AllWays to either play or hang at the Sunday swing dance.”

It was on one such night that I met Batiste. I was playing with what would eventually become the Sabertooth Swing band and Lawrence asked me during a set break if he could sit in with us. As he started playing, I immediately felt inspired by the soft swing that he applied to each eighth note coming out of his snare, rolling one after another with an unmistakably simple and beautiful quality. These beats complimented his soft voice humming the songs to follow along, and suddenly I felt the essence of the music we were playing in a way I never had before.

This feeling about how Lawrence Batiste played and what it brought to the people around him is echoed by celebrated clarinetist Dr. Michael White (as recounted by David Kunian in a 2014 Offbeat feature): “[H]e listens to everybody else who is playing,” Dr. White said, “He doesn’t try to force rhythm and blues or bebop in there. He gives the band a greater sense of the traditional sound.”

If one looks at music as the art of communicating emotion, perhaps the most remarkable achievement for a skilled performer is to be able to make their craft an extension of their genuine self to share with their bandmates and audience. The way Lawrence Batiste supported the people around him—on and off the stage—was his true virtuosity, an invaluable contribution to the city he loved.