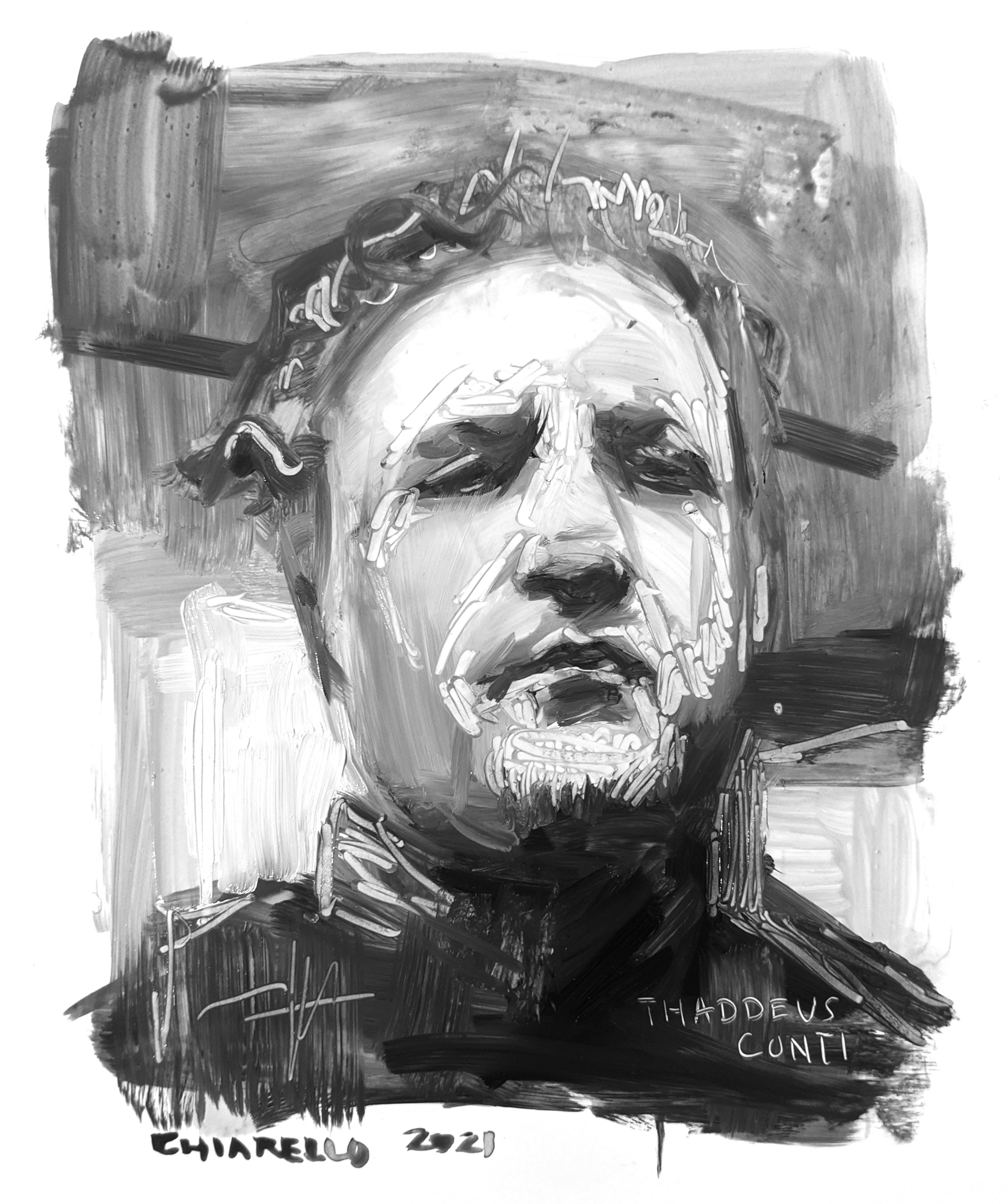 I found out local poet Thaddeus Conti, my high school friend Eddie’s uncle, died. He died a little over a week ago as I write this, shortly after Ida hit New Orleans. I don’t know the whys or wherefores. Maybe the strain of another catastrophic anniversary was just too much. I won’t speculate.

It’s funny because I met Thaddeus not long after Katrina—late ‘05 or early ‘06.

He was living in an apartment right off a big street in Metairie. Kind of dingy, piles of books and papers everywhere. We’d dropped off Eddie’s girlfriend April in an adjacent suburb, and on her way to her door, Thaddeus nudged Eddie and said in that way of his, “What are you doin’, dude? Go walk her to her door.” Which Eddie did, and which I immortalized in a free verse poem for my creative class.

I slept on Thaddeus’ couch that night. I think this mighta been the night Eddie and me took pictures looking real tough with x’d fists, which we printed out. I remember thinking this sardonic, admittedly slovenly, uncle-guy—clearly dedicated to his craft but also living in complete obscurity—was the true bohemian artist incarnate: loft stuffed with literary ephemera, giving sanctuary to a couple of (in our minds) subversive teenagers. Asking Eddie and me if we’d shoplifted that carton of Soy Delicious ice cream (we did), he only sniggered.

Thaddeus maybe wasn’t necessarily the guy I wanted to be at his age—and it’s ironic because, although at the time I mistook him for being middle aged, he was actually pretty close in age to my age now—I at least looked up to him enough to ask what poets he read.

“I’m not really reading anything right now,” he said, maneuvering around an ironing board. “I’m working on something and I don’t wanna be influenced by anybody.”

I thought it a bit… pompous maybe… at the time but I accepted his stance (ah, so, this is how real writers do it…). Still, he could see I was searching, so he dug out a couple pocket-size books, no more than 80 pages each. One was T.S. Eliot’s Selected Poems with a pulpy yellow cover and just-as-yellowed pages in between. The other was an edition of Rilke’s Letters to a Young Poet with a black cover, a rather prophetic book to give to a young man trying to find his way. I still have both. Eddie, if you read this and would like these as keepsakes—write to me.

But beyond doing a report on Eliot’s The Waste Land and sitting (I’ll admit, painfully) through one or two open mics off of Oak Street, I never caught fire as a poet. Which is just as well. However, I always credit Thaddeus with starting me on a little journey—or at least nudging me along—and offering me an example: of a guy whose vocation was to write, and who struggled—maybe struggled because his vocation was to write; or who struggled, and whose only outlet to make sense of anything was to write. I’ll never know—because I never got to talk to Thaddeus again or to thank him for these little mementos of my teenage years. So I’ll thank him here.