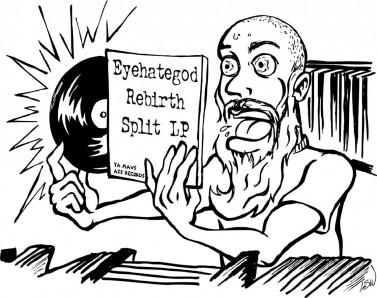 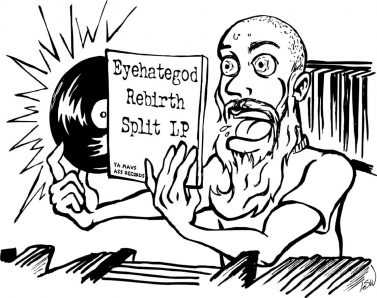 Some days are just meant to be hassle-free, where you can lay it all out and stop worrying about stupid shit for a second. Beach trips. Mardi Gras day. Sunday. Record Store Day should be like this, where we can put all the posturing aside, worship music in its captured state and show a little love to the merchants who peddle the future pieces of our beloved collections.

We sent out the official Record Store Day release list to our staff and posed the following premise: “You get your tax refund/pawn your guitar/win $500 in the scratch-off on the same day as Record Store Day. Where do you go, what do you get and why?” Here are their responses. May the vinyl overlords grant their wish.

“While Euclid and Domino Records are absolutely choice places to be on the 20th of this month, I’ll be heading to Skully’z  Recordz on Bourbon street. For what they lack in elbow room, they make up for in new, independent and local releases, special orders and customer service. Among many exclusive gems, I’m looking forward to a new Superchunk seven-inch, Void and I’m also hoping to collect on the re-release of Sigur Rós’ breakout album, Ágætis byrjun (heads-up Skully’z). Another hot commodity will be the long sought after Flaming Lips release, Zaireeka—four 12” records to be played simultaneously.  Yikes! This year’s official RSD ambassador himself, Jack White, along with Third Man Records, is releasing a 10 year anniversary, colored LP edition of the White Stripes’ Elephant. And if 10 years isn’t enough to make you feel old, then I recommend picking up the 20 year anniversary editions of Porno For Pyros’ self-titled debut and Cypress Hill’s Black Sunday. 20th anniversary release on 4/20? Well played, Cypress Hill! —Kevin Comarda

“If I were suddenly a $500 richer broad… I’d do what the official RSD site recommends and call around to all the independent shops in the area to see 1) if they can recommend someone who could help me get the belt back on my Marantz turntable and 2) if they had or could get the Donny Hathaway, Fela Kuti, Sub Pop 1000, Dazed and Confused and the Flaming Lips’ Zaireeka releases in stock. I’d spend the rest of the money haranguing whomever I can into a) telling me why I can count the number of RSD releases by women on one hand and b) why we can’t keep places like Odyssey Records on Canal Street open; word via DJ Soul Sister is the place has only a few more months of life left. Give it some love.” —Leigh Checkman

“I would hop on a plane to Manhattan and spend the day at Generation Records, shopping and checking out the in-store performances. The reason I chose Generation is because my boyfriend brought home a shirt from a previous RSD that has become one of my favorites. The graphic is a clever take on the poster from The Exorcist, with the store name across the top in purple Exorcist font and the tagline: “The Power of Vinyl Compels You” on the bottom. I probably wouldn’t have much money left to spend at that point, but I’d at least get some surf, punk and metal records.” —Jenn Attaway

“Elliott Smith’s Either/Or is one of my top 10 favorite albums on vinyl, so the ‘alternate versions’ promised for the 20th is clearly my top pick. Also, the Doors/X split is something I can’t walk away from. There’s a nice slab of Los Angeles rock history for you. I bought CDs of both bands at Waterloo in Austin on a Lovey Dovies tour, without realizing X did a version of “Soul Kitchen,” produced by Doors’ keyboardist Ray Manzarek. Thanks to the clerk for schooling me on that one. I’d blow the rest of my windfall on the GZA Liquid Swords box set. That’s my favorite hip-hop record ever.” —Dan Fox

“I would replace my original record collection I had as a kid/teen. That means Olivia Newton John’s greatest hits, Kiss’ Detroit Rock City, Fleetwood Mac Rumors, Kenny Rogers, Best Little Whorehouse in Texas soundtrack… and the Mary Poppins sing-along. I would probably go to Euclid and work my way around until I got what I wanted. I would make sure I had some good classic New Orleans vinyl as well.” —Tiffiny Wallace

“This reminds of when Chris George and I had real jobs that came with Christmas bonuses, which were immediately blown at Tower Records (RIP). If I were lucky enough to get a Record Store Day bonus, I’d have a pretty eclectic grocery list. The I have to have this purchase would be the side-by-side Misfits/Lemonheads release of “Skulls.” You can never hear “Skulls” enough; just ask that big-haired guy from Chalmette that would beg for it at every Supaflies gig. I would totally get suckered into buying the live double LP from Built to Spill even though I would listen to it once as I do with every live album I get excited over and then immediately get bored with. Weirdly, I would probably also get the re-issue of At the Drive-In’s Relationship of Command, though I would listen to it way more if it was a live album. Their amazing live show was never able to translate properly to a studio album. The Atmosphere Demosexual purple seven-inch would go to a girl that probably doesn’t deserve it, but if I saw it in the rack I’d surely buy it for her. I’d also buy the Earth Crisis Firestorm re-release just to shit on it, stuff it in a paper bag, light it on fire and leave it on Bryan Funck’s porch. I’d satisfy my ‘60s itch by scooping up the Zombies and the Seeds releases. Fela Kuti would find his way into my basket mainly because I love the Fela Soul (De La Soul/ Fela Kuti) mashup record. The fact that they hired me as a chef and that they then blew me away at One Eyed Jack’s guarantees Calexico’s release being part of my haul. There’s a lot of records from artists that found their way onto my ‘90s era mix-tapes that would find their wax version in my collection: Samiam, Braid, Elliott Smith and Husker Dü. However, the thing I’m most excited about is the great hip-hop re-releases being made available. The GZA’s Liquid Swords is close to Nas’ Illmatic in the race for best hip-hop record ever. The Roots’ Things Fall Apart is also high on that list, and I credit them with saving the live hip-hop show from being just screaming in a can to a full-on band experience. I will always love them for that.” —Kevin Barrios

Record Store Day is Saturday, April 20th. Check in with your favorite shop to see what they’ll be stocking. For a comprehensive list of releases, check out recordstoreday.com