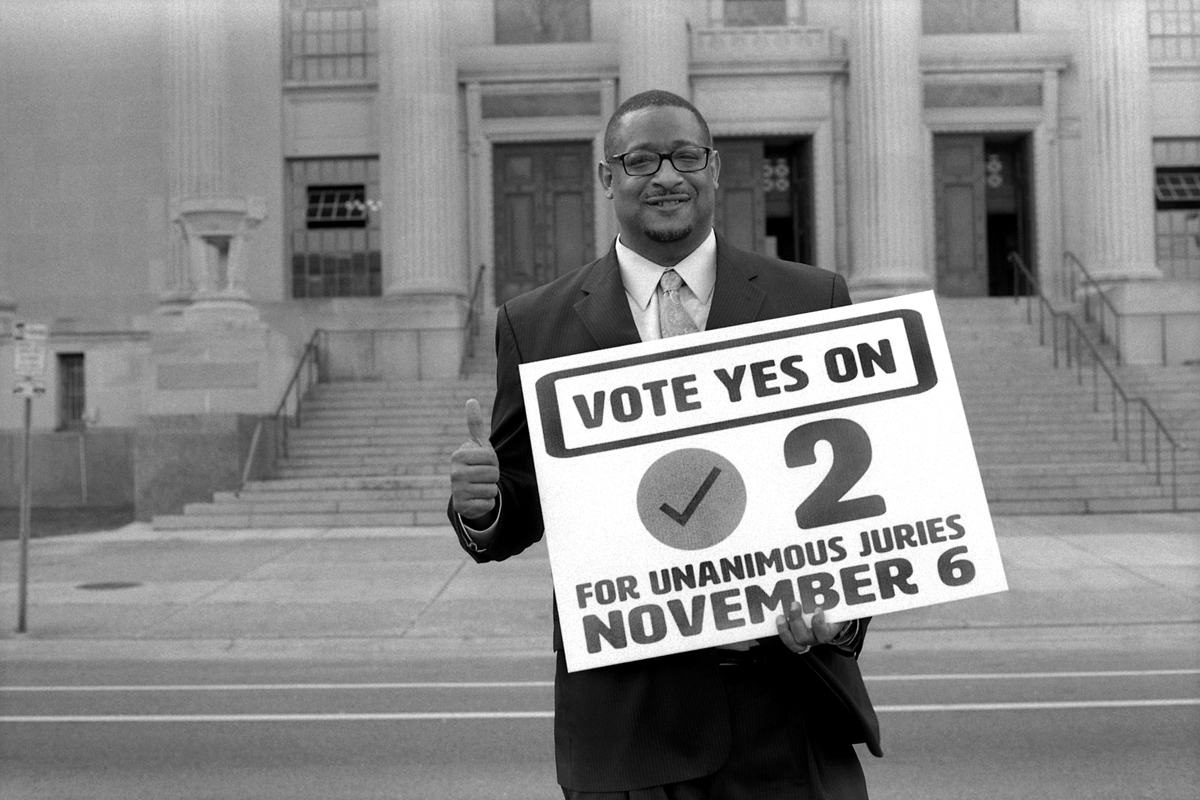 In August of 2018, I began interviewing attorneys of the Orleans Parish Public Defenders Office to better understand the practices of our criminal justice system.

I spoke first with Alexis Chernow and learned about bail reform and the Brady Rule (which requires the prosecution to disclose evidence or information favorable to the defendant in a criminal case). Chernow believes there needs to be punishment for breaking the Brady Rule, such as sanctions on the District Attorney’s Office for allowing its attorneys to commit those violations, or discipline for the line attorneys when they violate the law.

This time, I spoke with Brian Woods about his early days as an attorney, the recent passing of Amendment 2 (which ended the era of the “Jim Crow Jury” where a non-unanimous jury could convict), and the habitual offender law, which has been used by the District Attorney’s office to incarcerate more than 2,600 people between 2009 and 2017 (according to a November 2018 story from The Lens). In order for reform to continue, the public must hold the justice system accountable; the voices of public defenders are crucial to our understanding of the situation.

Why did you decide to work for the Orleans Public Defenders (OPD) office?

I used to drive from New Orleans East to Baton Rouge every day during my first two years of law school at Southern University. My daughter was just one year old when I started law school, so moving to Baton Rouge wasn’t an option. I remember those days hitting I-10 at 6 a.m. and coming back late into the evening. I remember having to postpone my studies because my toddler needed my attention. Despite that, the first two years went by so fast. Katrina hit at the beginning of my third year. I slept on my classmate’s sofa for the first semester. That semester was definitely a test for me. I missed my daughter, my home, and my bed. But the second semester turned a corner. I participated in the criminal clinic and was amped up when handling my first misdemeanor judge trial. I represented a client who was indigent. Although we didn’t win the case, I received some positive feedback that encouraged me even more.

Upon passing the bar in 2007, I was ready to take on the world. I wanted to be a litigator and I wanted to do it in my city. I wanted to be a part of the revitalization of New Orleans. My first case, I represented a relative on a serious accusation. He didn’t have any money to hire an attorney and expressed concern with having a public defender. He worried about the caseloads [and] lack of passion and diversity. I successfully got my family member freed from the charges and soon began hearing from other inmates. None of them could afford an attorney and each had the same concerns about the public defender’s office. They expressed how they needed my assistance because they were going to get railroaded by the system.

Solo practice can be a struggle and I knew the public defender’s office was trying to rebuild. There was a host of attorneys coming from across the country to assist this broken office. I wanted to do my part. I wanted to be a voice for the poor people of New Orleans. I wanted to let them know they had a zealous advocate even if they didn’t have any money. I wanted them to know there was hope and that I would fight for their rights against a system that believes in punishment rather than rehabilitation.

It’s been ten years now and the office has changed tremendously. I’ve had the chance to represent so many people.

Was there someone in your life that influenced you to become a lawyer?

Trying to decide what I was going to do with my life, and desperate for a career change, I contacted my aunt [Catherine Smith], who was an attorney in New Orleans. She offered to show me around Tulane and Broad. She was seasoned and well-respected. I watched her maneuver the courthouse with knowledge and precision. I was amazed at her ability to relate to everyone she encountered. I was also shocked at the many injustices I witnessed. There were benches filled with men, shackled and wearing orange jumpsuits. Some scanned the crowd for a familiar face to support them in their time of need, while others looked on with an inquisitive stare, all waiting for their lawyer to say the right things, to prove their innocence, to get them released and back to their families, to get help they desperately needed. Those that were fortunate enough to be told they were being released and going home smiled brightly. I thought I could do this and I really wanted to stand up for so many of the men and women that looked just like me.

Like how most everything is done in New Orleans, we talked about court and everything I had just seen over a long lunch. She talked about the important role attorneys—especially defense attorneys—play in ensuring the justice system is fair and just. She believed I could be that kind of an advocate. Soon after, I was accepted to her alma mater, Southern University Law School. She pushed me and always had words of encouragement and criticism, too—probably something I needed to hear just as much. I had dreams of working with her upon graduation. However, she succumbed to brain cancer shortly after Hurricane Katrina, never to see me walk across the stage or try a case together.

“I wanted to be a voice for the poor people of New Orleans. I wanted to let them know they had a zealous advocate even if they didn’t have any money. I wanted them to know there was hope and that I would fight for their rights against a system that believes in punishment rather than rehabilitation.”

How will the passing of Amendment 2 restore justice, equality, and fairness?

Non-unanimous verdicts have been an injustice in our justice system for far too long. Split verdicts have sent many innocent people to prison, including some of my clients. I believe unanimous verdicts will allow juries to be more open-minded in discussing whether the state has proven its case beyond a reasonable doubt. Our system is also supposed to be built on the guarantee of an impartial jury of one’s peers. The non-unanimous jury was created to circumvent that ideal by not requiring all 12 people to agree. If one person has doubts, that means there is a problem with the case. When we’re trying to take someone’s liberty away, we should be 100% sure. I think we’re still a long way from fairness and equality in our justice system, but this is definitely a huge step in the right direction.

What happens to those who were convicted under non-unanimous juries?

Unfortunately, convictions prior to January 1, 2019 are not eligible for the constitutional change. We are fighting that specification—as are many others across the state—but it’s too soon to tell how the courts will rule or what it means for those convicted prior to this year. This issue has affected countless people over the years. Hopefully, there will be relief for those convicted under this reminiscence of Jim Crow.

What is the history of the habitual offender law in New Orleans?

The habitual offender law was enacted to allow for harsher penalties for repeat felonious offenders. It imposes a mandatory minimum prison sentence or increases the mandatory minimum prison sentence on more serious crimes. However, we see it used on a daily basis in New Orleans, even as simply a threat, for all sorts of charges, no matter how insignificant or unrelated. This creates sentences substantially out of sync with the [charges] and has contributed greatly to New Orleans and Louisiana’s enormous incarceration rate. There was a ten year cleansing period, starting from completion of sentence, for someone not to be considered a habitual offender. You saw this with Bernard Noble, who was sentenced to 13 years for two grams of marijuana because of prior drug possession charges; and the case out of St. Tammany where [Cornell Hood II] was sentenced to life as a quad offender for drug possession. The recent changes because of the Justice Reinvestment Package is a step in the right direction.

Is the habitual offender law now being used to coerce defendants to plead guilty? What has been your experience?

In my experience, the habitual offender law has always been a tool used by the District Attorney’s office to intimidate someone to plead guilty. There doesn’t appear to be any rhyme or reason to it. I’ve had low-level drug possession cases charged as multiple offenders and I’ve had very serious charges enhanced with the multiple bill.

One client of mine was accused of a drug offense. He had a lifetime of addiction and cycled in and out of sobriety. When he wasn’t sober, he found himself in trouble trying to chase that addiction, and had gathered several other drug possession convictions. Those prior convictions, under the habitual offender guidelines, exposed him to life in prison. He was offered a plea deal for 20 years in prison. That is a tough conversation to have with a client, explaining to them that they need to accept a 20-year plea deal on a drug offense or risk never coming home by going to trial.

For so long, jail has been thought of as a bad place for bad people, a place focusing more on retribution rather than rehabilitation. I feel the focus should be more on the current accusation, rather than a person’s previous convictions, particularly for low level, non-violent offenses. Someone serves their time and then their debt to society is met. But I’ve seen people who got into trouble when they were younger doing stupid stuff and had those convictions used against them even if they are completely unrelated charges, most times low level stuff. But according to the habitual offender law, they are facing 20 years to life in prison on an offense that is most often probatable. But that plea offer for 10 years versus potentially life in prison suddenly takes the seriousness of the original charge to a whole other level. Is that wrong? You tell me.