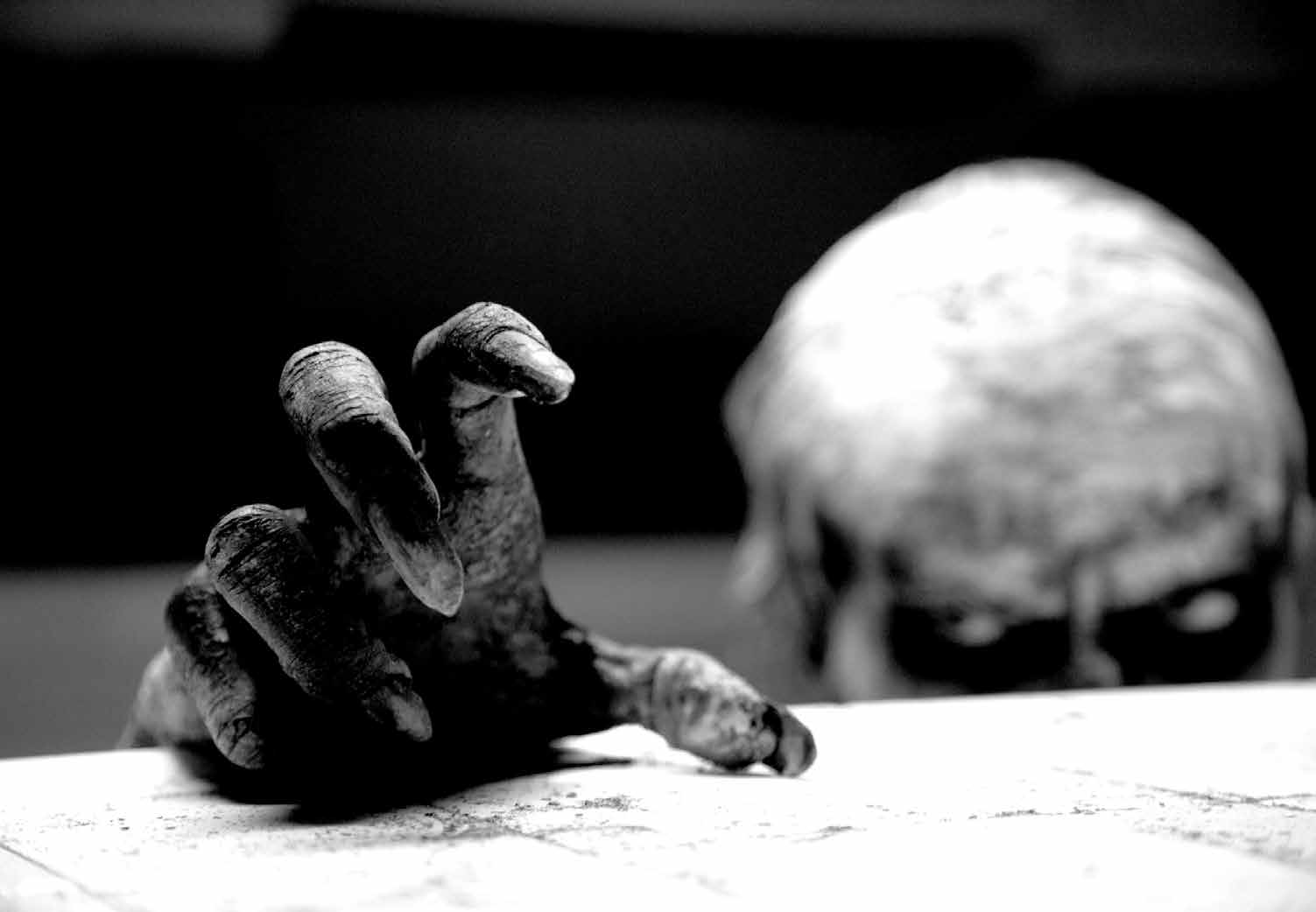 It’s one thousand degrees outside and the mosquitoes are gorged with summer blood, but the times, they are a-changin’. The dollar stores are rolling out their selection of pumpkin-scented whatevers, coffee shops are adding cinnamon and nutmeg to everything on the menu, and—at least in our minds—the promise of crisp air is just within reach. Fall is on its way, and with it comes the 5th Annual Nola Horror Film Fest. Run by JT Seaton and Charles Lucia, the fest promotes horror and sci-fi films, both local and international. Two of AG’s horror fans were lucky enough to give their picks out of this year’s entries for an advanced screamathon. Here’s what did, or didn’t make them puke.

An award-winning music video opens the fest with “Your Direction” by The Boy Dahlia. With the band’s alternative rock-meets-pop appeal sound, they visualize their song with a demented, yet dreamy love story that goes back in time. The video follows a groom who keeps his rabid, zombie bride in their attic and feeds her rats to keep her satisfied. Kudos to the zombie makeup team. The couple, played by band members Ben Brady and Ali Haas, comes back from the dead to their boarded up, abandoned home as if it had died with them decades ago. The video is also a period piece that reflects the late 19th/early 20th century through the couple’s wedding portrait, wardrobe, and set design. The excellent cinematography captures the juxtaposition of the home’s serene ambiance from the naturally lit, snow- covered landscape, to the dark, walk-in tomb of the attic. The groom sings, “I smile to see it fall and I realize what has to be done/ Cause there’s a picture of your body and you’re covered in gold/ I said it to a rhythm and it never gets old/ I keep it always with me in the back of my mind/ I move in your direction and it helps me to find you.” This leads us to believe that true love never dies despite time—or becoming a zombie. Finally, along with the visually stunning video, the song itself will definitely linger in your head. —Morgan Lawrence

Even the description of this 15-minute short is terrifying: “Inspired by true events. Scott Somers mysteriously experiences sleep paralysis when his wife Marie sleepwalks at night. Unbeknownst to him, she lives with a horrible secret that slowly begins to eat away at their relationship.” After reading that, and then scanning the credits to see that Eileen Dietz (the face of the demon in the original Exorcist) was in it, I just stared at my screen unable to hit play for a few minutes. Anything having to do with sleep paralysis and the vague mention of true events is enough to get the imagination going and set you up to be scared before anything has even happened. The first of the three selections I’d watched so far to make me want to cover my eyes, Hag (written and directed by Erik Gardner) delivered more than a few truly scary moments, even though the acting was delivered in a style more porno standard than horror standard. A bit over delivered, but it added to the fun rather than taking away from it.  —Kelly McClure

They say there’s two sides to every story. But this short film exposes the possibility of two sides to every person. Set in 1950s Los Angeles, a serial killer named Claude slaughters his way through town, showing a special affinity for his female victims. John Cooley plays our lead, Charlie Hyde, a private investigator who seems a little too invested in the infamous killer. The film opens to his cramped apartment stuffed with books, crime scene photos, and newspaper clippings about Claude’s reign of terror. Charlie’s careless, yet cocky persona disintegrates after detectives interrogate him about why his dog tags were found at the scene of the crime for his missing love interest, Lucky Penny (played by Jessee Foudray). Using great costumes and well-written dialogue, this film explores an era when high-profile cases went cold due to lack of forensics— remaining hopelessly unsolved without a confession. We realize the possibility that Claude is closer than we think with the use of flashbacks to develop the relationship between Charlie and Penny (especially in the scene where Charlie lingers backstage during Penny’s show). The symbolic use of lighting magnifies the hidden depths of Charlie’s demons, leading us to believe that Claude may be too close for comfort. —Morgan Lawrence

David Coyle is the writer, director, and sole actor for this ten-minute South Australian short that uses silence and disorientation to build fear. Made on a budget of only $2,500, the mini movie revolves around one man, an inescapable looping room of white walls with red trim around the doors, a red rubber ball, and a gun with one bullet. That’s all that’s needed to create what turns out to be ten minutes of furrowed brows and nail-biting. Enfilade was previously awarded “Best Experimental Short” at the Arizona International Film Festival, and “Best Experimental Film” at the Tiburon International Film Festival. According to David Coyle, the year before he shot Enfilade was the first time he’d ever used a video camera, which is beyond impressive given the lasting effect of this film. —Kelly McClure

More or less a zombie movie without the zombies, Containment, a British thriller directed by Neil West, does a great job of turning human beings into monsters. Knowing little about this film going into it—only that it had something to do with a viral epidemic causing people to be made prisoners in their apartments—I spent the first half of the movie waiting for zombies to happen. When they never did, I wasn’t disappointed: it created a scenario that is realistic enough to be actually feared. You find yourself thinking about what would actually go down if there were a deadly, airborne virus out there dividing us into groups of “infected” and “not infected.” It wouldn’t be pretty, and it hasn’t been pretty. Situations similar to the ones depicted in Containment have happened in real life, and the quick unraveling into chaos is a glimpse at the thin, fragile thread that holds this whole circus together. Neil West gave a really interesting interview to Irish Film Critic to discuss the film and mentioned that while crafting the idea for it, his notion was that there are no good or bad people, just people, and that the “horror” in films such as this one comes from the choices these ordinary people make, and how they affect everyone else. All of this lends a great deal of extra substance to what could have easily been just another drooling, guts- grabbing, zombie situation. There’s a much larger conversation that could be had about how the monotony of life can easily turn into a drooling, guts- grabbing, zombie situation, but that’s better shown (here in this film) than read. —Kelly McClure

Don’t let the silly title fool you, as this short film packs in humor and horror like chocolate and peanut butter. First, writer and director Damian K. Lahey refrains from using cuts, as the film unfolds in one long take. Tara DeSpain plays Jessica, a sheltered soccer mom who wakes up in a basement tied to a chair as she tries to talk her way out of getting murdered by a silent, masked serial killer. Lahey uses off- screen dialogue throughout the film to introduce characters like fellow soccer mom Ashley, played by Robyn Ross. This technique uniquely carries the story and elaborates Jessica’s character development; plus, this allows the audience to do the work of filling the space of the scene. Ashley bickers with Jessica from a locked kennel but Jessica stays at the center of attention as she remains in frame. Succinctly summed up in Jessica’s line, “Let’s face it—I’m too old to be a victim of this sort of thing,” this film works as a charmingly horrific satire. After all, soccer moms are on a tight schedule, and escaping from a serial killer is just one more thing to add to their to-do list. —Morgan Lawrence

In everyday life, few things are more terrifying than working in an office and having a douche lord for a manager. That’s like constant, seemingly unending horror. Bloodsucking Bastards, directed by Brian James O’Connell, plays off of that by making bloodsucking bosses into actual bloodsuckers. Shot in Los Angeles, the film takes place almost exclusively within the fluorescent-washed walls of an office, introducing new settings only briefly with a few dips in and out of a parking garage. Fairly star- studded as far as indie films go, the cast includes Fran Kranz (Dollhouse, Cabin in the Woods) Pedro Pascal (Game of Thrones) and Joel Murray (Mad Men). Mixing humor with gore (think Buffy the Vampire Slayer meets The Walking Dead), the film opens with a flash forward, showing key character Tim, played by Joey Kern (Cabin Fever) staring into a blood-soaked room saying “Well this is pretty much the grossest thing I’ve ever seen.” Having seen a good amount of horror films in my years, it wasn’t the grossest thing I’ve personally ever seen, but it was clever and entertaining throughout. The movie even had a line that made me laugh out loud: “I believe I know this cat, sir.” But I’m not gonna spoil it by giving context; you’ll just have to wait for it. “The doldrums of the workplace is perfect fodder for comedy, as it is something we can all relate to as people. The sudden, shocking violence that happens in a place so familiar, from our co-workers no less, truly speaks to our primal fear of what we’re actually capable of doing to each other,” director Brian James O’Connell said in his statement about the film. I’m sure we can all recall stiflingly dull office days in which we almost prayed for a vampire attack to break things up. This movie is a great way to vicariously work out any pent up work-related hostility without actually, well, biting or staking anyone.—Kelly McClure

This short film reimagines the Boogey Man as a child-luring creature who aims to entertain and emotionally scar his victims. It takes place inside a quiet suburban home with a little girl obliviously watching cartoons, until she notices a trail of balloons weighed down by bags of dismembered dolls. The film’s original, eerie music heightens the action and captures the little girl’s vulnerability inside her own home. The score also intensifies the reveal of “The Smiling Man” and his horrific appearance (special thanks to the Makeup FX duo, Melanie Leandro and Brittany Fontaine). The visual effects team also does an exceptional job in creating The Smiling Man one glimpse at a time, so that the audience can use their imagination to piece together what he actually looks like leading up to his reveal, similar to techniques used in M. Night Shyamalan’s Signs. The quick cuts in the editing and diverse use of camera angles makes the film more dynamic without oversaturating the story, and the use of POV shots violates the personal space of the viewer when we meet The Smiling Man face to face. In the end, The Smiling Man has quite the opposite effect on his victims and his smile will haunt you long after the credits roll. —Morgan Lawrence

The 5th Annual NOLA Horror Film Fest takes place from September 24th to 27th at Rare Form, with an opening party at Mag’s 940. For more info, check out nohff.com and facebook.com/nohff