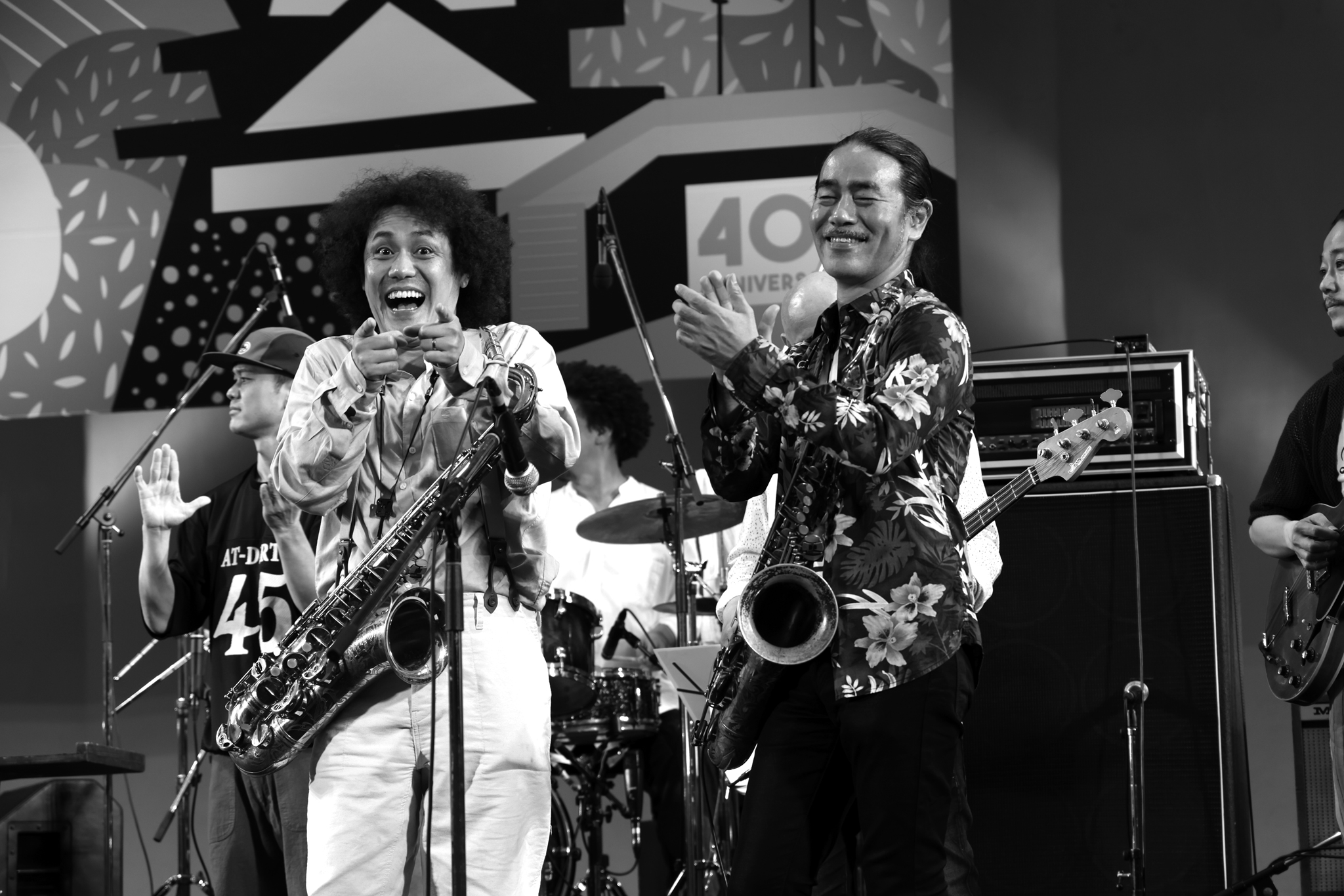 You’re never far from home when home is New Orleans. In early May, I undertook the grueling 25-and-a-half hour-long journey to Osaka, Japan for a new opportunity. I’m currently conducting musicology research about musical connections between New Orleans and Japan at Osaka University. Not much time has passed since I first landed but I feel fortunate to already experience the world’s smallness and the sheer reach of New Orleans culture.

One week, I was getting sunburnt while enjoying a tribute to local legends Art Neville and Charles Neville at Jazz Fest. The next week, only three days after arriving in Japan, I was welcomed to Osaka by the city’s very own Jazz & Heritage festival in Osaka Castle Park. Blitz and Squash Brass Band, an Osaka group that backed the late, great Travis “Trumpet Black” Hill in Japan, second lined down the aisles of the packed outdoor bandshell. The brass band tore through the Neville classic “Hey Pocky A-Way” with Osaka Castle clearly in view. Cuts like Mystikal’s “Shake Ya Ass” blared over the PA between sets of New Orleans-style jazz and traditional Osaka folk music, a different type of heritage than New Orleanians are accustomed to at our version of the fest. Mitch (Yasuda), a trumpeter and former New Orleans resident, fused the two disciplines through a collaboration with enka singer Kaori Kozai. Together, they transformed the New Orleans ode “The House of the Rising Sun” into a Japanese language number defined by the contrast of sorrowful vocals and soulful trumpet that referenced “St. James Infirmary.”

Two weeks later, Krewe of Brass, a ragtag assemblage of Osaka brass band musicians,  performed in The V in Soemon-Cho. Drummer Junji “Oji” Kimura, a second-generation New Orleans style musician, accurately described the area as the Osaka equivalent of Bourbon Street, complete with trash, heavy foot traffic, and seedy bars. “Like New Orleans! Gumbo on the riverside!” shouted bandleader Kenji Suzuki in reference to the event’s food popup as Krewe of Brass kicked into action for their afternoon set. Not long after, he led the band out the bar’s back door in a presumably unpermitted second line alongside the canal. Unindoctrinated passersby looked on with varying degrees of excitement and sheer perplexment as this New Orleans tradition unexpectedly smashed into the popular tourist district. The band and their followers slowly paraded up to the Glico Man sign, one of Osaka’s most iconic sites. Suzuki, a true showman, took great joy in tooting his soprano saxophone in the faces of tourists trying to take selfies in front of the sign. For a moment, it felt like New Orleans and Osaka weren’t that far apart.

The following night at Voco, I watched some of the same musicians shift to a different pace, shedding the prior night’s funky brass band feel in favor of paying tribute to the early days of New Orleans jazz. Kimura introduced me to fellow attendee Junichi Kawai, who lit up when he heard I was from New Orleans. Kawai has played banjo in Osaka’s traditional jazz group the New Orleans Rascals for over six decades. To this day, the Rascals, which also feature Kimura’s father, continue to perform weekly at trad jazz mecca New Suntory 5, the Osakan equivalent of Preservation Hall. Kawai eagly told me about his first trip to perform in New Orleans during the mid-60s and the seemingly impossible number of books about the city that he somehow lugged home from the trip.

At the beginning of June, I reunited with a very familiar face: guitar slinger extraordinaire June Yamagishi of Papa Grows Funk and many other New Orleans projects. When I first told June about my then-upcoming move during French Quarter Fest, he loudly quipped “What the fuck!” in a humorous display of pure shock before revealing the plans for his COVID comeback tour of Japan. Here we were together again, six weeks later and a few thousand miles from where we had last met up. His friends laughed at the sheer absurdity of it all as June slid into his purely New Orleans English and I replied back in my subpar Japanese.

Despite residing in New Orleans since the mid-90s, Yamagishi still retains quite a following in Japan, so much so that I had to bank on no-shows to get into both of his sold-out gigs in Osaka. His packed Tuesday night show featured him reuniting with Takashi “Hotoke” Nagai. The two started their music careers together five decades ago as part of the highly influential West Road Blues Band, one of Japan’s early electric blues groups. The crowd was hooked on every note. To them, June wasn’t just some old guy who sets his amp up in the back of a seedy bar. He was a living guitar legend. I hope New Orleanians remember to give the numerous living legends within the city’s boundaries the same kind of vigorous applause.

Later that night, I reunited with June’s son Light, a DJ who I met in Japan back in 2018. Much to my delight, Light and I wound up discussing the lesser-explored depths of New Orleans music for hours on end. When he pulled out his phone to show me a specific act, I was shocked to see ANTIGRAVITY open on his web browser. Apparently, he’s quite the fan. It’s heartwarming to learn that sometimes the voices we amplify reach further than we expect from this humble arts and culture rag. After all, you’re never far from home when home is New Orleans.

Top: Kenji Suzuki (left) and Tsutomu Takei (right) perform “On the Sunny Side of the Street” with Mitch All Stars for an encore at Osaka Castle Park on May 15 (photo by Amy Nguyen)