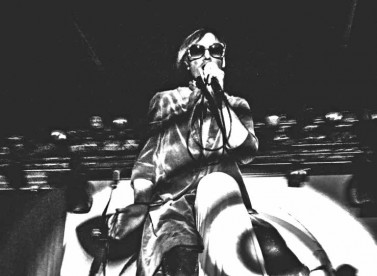 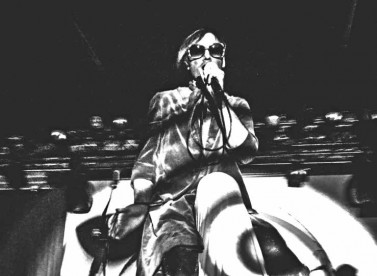 Of all the bands that exist as part of the Elephant 6 Collective, Of Montreal carved out, by far, the most interesting aesthetic. With a personal pop yearning and character sketches as strange and unusual as they are humanizing, frontman Kevin Barnes has crafted a very special place in post- millennial indie music. Just in time for their November show at Howlin’ Wolf, we were able to talk to Barnes about his D.I.Y. aesthetic, his transgender alter ego, and the importance of moving forward.

Let’s start at the beginning. What exactly is your relationship with Elephant 6?

Kevin Barnes: I guess the connection would be through Julian Koster, who plays in Neutral Milk Hotel. He was in a band called Chocolate USA in the mid-’90s or something, and I was trying to get recording time with this label Bar None. Chocolate USA was on that label, and I was talking to the people that ran the label on how to do anything. So they said, “You should talk to this guy Julian, he’s like you, a home-recording guy, a D.I.Y. guy.” Julian was really sweet, really helpful, and invited me to Athens, Georgia. He helped me record my first record and introduced me to Jeff Mangum, Will Hart, Bill Doss, and all those people. They already had their thing together, but I was living with them. We all lived in a house together in Athens. So I could see what they were doing, just making these four-track recordings in their room and sending them to pressing plants to make 100 copies to sell. Everything they did was D.I.Y., in-house stuff, so I learned from them how to go about doing things like signing up for an agent or whether you need a manager and whether or not you need to sign to a major label.

I think Cherry Peel [Of Montreal’s debut album] stands out from a lot of the other Elephant 6 records, because where their stuff can sometimes come off as anti-pop, your work is very poppy.

They were more experimental for sure. I think I just really loved the Beatles and the Kinks—just pure melodies, a twee and naive approach to writing. But their stuff is a lot “cooler.”

After that record, you were working in the same style for the next few records. You did a lot of what I would call “Lovely Rita songs”: character sketches of people we may or may not be familiar with in our everyday lives—some are broad, some are really specific. Was that a conscious change in songwriting, or did it depend more on who you were working with or who was a part of the band?

I felt a little burned by sharing too much of my personal life because the criticism of Cherry Peel was pretty harsh. There weren’t a lot of people writing about it, but the people who did often were pretty cruel about it. So I was pretty sensitive at that point, and I wanted to maybe withdraw and hide behind these character sketches. That was probably one of the big reasons why. If I write about this character I invented, even if it has some significance from something in my personal life, I won’t feel as vulnerable. But also, being a huge Beatles fan, I like songs like “Lovely Rita” and “Paperback Writer.” The Kinks also did these sketches of people. Writing about characters is kind of more liberating in a sense, because you can have them do anything or go anywhere. It’s kind of like being God for three minutes. I’m also really into Edward Gorey stories and twisted children stories, so that comes through as well.

I would say that your turning point was Hissing Fauna, Are You the Destroyer. But do you feel like there’s an earlier twist in your style?

I would say it started earlier, really. The Gay Parade is a little more rock’n’roll and a little less fun. It gets a little harder around then, and then the electronica influence came through. That was the real beginning of something new. The Sunlandic Twins was getting into programming and using more synthesizers and MIDI instruments that were kind of taboo in the early Elephant 6 period. No one used drum machines, nobody really used MIDI at all, [that] seemed like cheating. Getting into that electronic world was fun for me, and it helped me break away from the past.

And what would you credit that to? Because all of those records were mostly on the same label, then you moved to Polyvinyl from Kindercore. Is that what you think contributed to it, or did something else affect you stylistically?

There was a lot going on in my personal life. The band I had for much of The Gay Parade, Coquelicot, and Aldhils Arboretum, we sort of broke up. We were all living in a house together, and I got married and moved out of the house with my wife and my brother. The band was dead in the water and that point, none of us were making any money, nobody was coming to the shows. It felt like the closing of a chapter. I think in that way I felt free to explore new things. I didn’t feel like I was carrying any baggage. I felt totally liberated from that period, and I was excited about starting something new.

On Hissing Fauna, I would say there is some darkness, but it’s not necessarily a very dark record. There is this beautiful S.F. Sorrowesque break in the middle that seems to denote a transition of sorts. Did you see this as a personal transition? Was it purely for the aesthetics of the record, or did you feel like this was a cornerstone moment for the band?

I wasn’t really thinking about the band or anything. That record was just about me keeping myself together. I went through a depression, and music was my form of therapy—a way of escaping from all the ugliness, sickness and negativity. It definitely deals with a lot of heavier issues, but it’s masked by this happy-sounding soundtrack. If people aren’t digging deeply, they aren’t necessarily touched by that aspect. They might just think it’s fun electro-pop or whatever. In reality, I was in a really dark place. “The Past Is A Grotesque Animal” was the embodiment of all of that in one song, how brutal the emotions actually were. That song was really indicative of where my head and heart and soul and spirit were at that point.

By False Priest, there were elements that you had played with before that, on this record, came out full- throttle. African-American music influences like disco, funk, and even some R&B flirting on there. I’m curious what brought you back to that pop aura?

I fell into this spirit of making soulful, funky music. It’s a continuation of George Fruit, the alter ego I created around Hissing Fauna, this Black shemale* wild-child. I was in that headspace for a few records. So getting deep into that vibe, that spirit. There’s a lot of really wild energy on those songs. Like blue-eyed soul, but I have brown eyes. Brown-eyed soul? Writing those songs, I didn’t feel self-conscious at all.

You’ve been recording with Polyvinyl, which is a pretty big label. Do you feel like you can include your D.I.Y. techniques in the way you record, or is there more high-tech experimentation at this point?

Everything starts with me, so I haven’t really worked with outside producers except for False Priest. It’s been pretty much just myself with a handful of people contributing. It’s been pretty similar from the early days to where I’m at now. I make most of my records at home in my home studio and I do a lot of the engineering myself. So it hasn’t really changed that much over the years.

Do you feel like Aureate Gloom, which is just as funky as your other recent records but just as personal as your first record, is a return to form? That you’ve come back to where you started in terms of freshness and approaching a version of the style that helped you created Of Montreal?

I wouldn’t say a “return to form.” I don’t really know what someone would say the form is. I’m always reaching out to different forms of inspiration and different time periods, different genres, different songwriters to take inspiration from. So it hasn’t changed at all. Maybe Aureate Gloom is similar to some other stuff that I’ve done, but there will always be something to connect them together. I’ve never made a conscious effort to “get back” to anything. I always feel like I’m moving forward, or in some direction that’s not backwards.

*the term “shemale” is considered dehumanizing to transgender people. It is not AG policy to edit interviews or articles based on the use of derogatory lanuage.