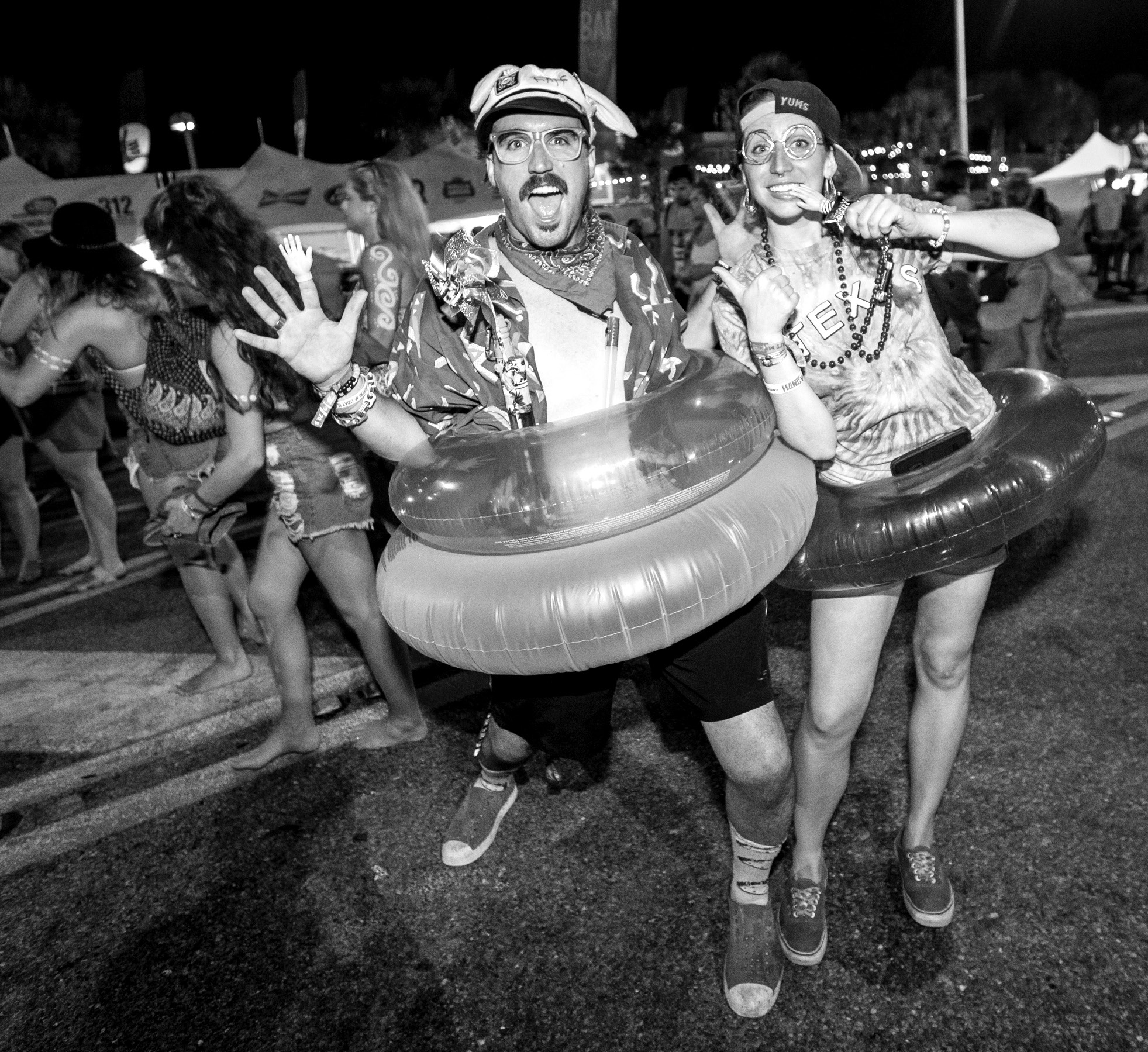 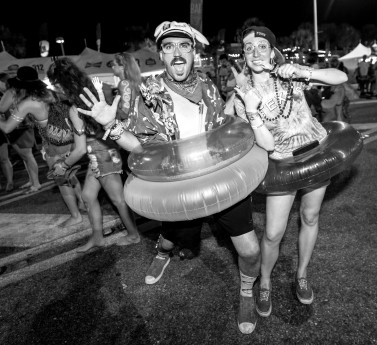 For three days a year, a quiet beachside town in Baldwin County, Alabama transforms into the USA’s only large-scale music festival directly on a beach. Hangout Fest started in 2010, less than a month after the Deepwater Horizon  disaster unleashed an estimated 4.9 million barrels of oil into the Gulf of Mexico. After crews spent weeks frantically cleaning up tarballs, that 2010 festival still sold out and it hasn’t lost momentum since. Five years later, Hangout Festival has ballooned from serving 15,000 to 40,000 attendees. Beyond its lineup, Hangout is known for its enviable location directly on Gulf Shores’ white beach, and perks such as stageside pool in the VIP viewing area and a myriad of beach activities.

Cold War Kids
Our Hangout Fest experience started with Cold War Kids’ set at the Palladia stage, where attendees left their  beloved sand for worn grass and pavement to watch non-headliners. The band, noted for its enthusiasm, kept up the energy throughout the set by doing whatever they could to pump up the crowd. Headbanging while rocking out on yellow maracas, lip-syncing to the words when you’re not mic’ed up, and even the old standard of big clapping was included. The crowd clapped along and participated. The first stand-out of the set was “We Used To Vacation,” a heart-wrenching track that conjures up memories of regrettable moments. The band played some of their fan favorites  like “Hospital Bed” and “Hang Me Up To Dry,” and ended strong with Robbers and Cowards’ “St. John,” a fittingly bluesy song for this Alabama music fest.

Umphrey’s McGee
While I think of Umphrey’s as a late- night band, their early evening set was one of the highlights of Hangout. They often get lumped into the jam band category, but their tight, high energy show always has a tinge of hard rock, and this set was no exception. Lupe Fiasco, whose earlier show was cancelled due to travel issues, joined the band for an energetic rendition of Fiasco’s “The Show Goes On,” which they dedicated to recently deceased  bluesman B.B. King. After experiencing Umphrey’s deliciously funky instrumentals on that song, I prefer  their version.

Spoon
Spoon took the stage dressed  completely in black-and-white, except for frontman Britt Daniels’ wood- framed sunglasses (it was cloudy out). The sound was on point, except for a few moments when Daniel’s signature howling vocals fell flat and later on in the set when there were a few chord  problems. Spoon classics like “The Way We Get By” and “Don’t Make Me A Target” were scaled back from their  high energy album versions, imparted with more sparse instrumentation well-suited to a beachside set.

Father John Misty
The Palladia stage was the perfect  size for the folksy Father John Misty. His set blended tracks from Fear Fun and 2015’s I Love You, Honeybear, including favorites “Bored in the USA” and “Chateau Lobby #4: In C For Two Virgins.” The undisputed highlight  of the show was singer J. Tillman  serenading a pool toy with “Bored in the USA.”

Skrillex
Five stars for people-watching. To my left were three kids, all of whom appeared to be under the age of twelve, who head-banged, high-kicked, and spun their way through the set. To the right was a dazed guy who had his heart  set on building the perfect sand couch, but his love for wildly thrusting to the beat kept getting in the way. Standouts included “Make It Bun Dem,” Knife Party’s “Internet Friends,” and “Recess.” My personal favorite moment was when Skrillex asked everyone to grab someone near them and hold them  up; he then proceeded to start his next remix with “Circle of Life.”

Zac Brown Band
After Skrillex concluded, Zac Brown fans trekked across the beach to the Hangout stage, their ears still ringing and their eyes struggling to adapt to the night after the onslaught of flashing lights. That said, Zac Brow Band was a great way to slow down, relax in the sand, and end a Saturday night. He started the show with country pleaser “Homegrown”  and sprinkled old songs throughout the set, as well as a plethora of cover songs including John Mayer’s “Neon,” Bob Marley’s sweet “Three Little Birds,” Metallica’s “Enter Sandman,” and Queen’s “Bohemian Rhapsody.”

Vance Joy
Poor Vance Joy. They’ve created a collection of decent, laidback songs perfect for the beach, such as “Mess is Mine” and “First Time,” but the track everyone was waiting for was their  megahit single, “Riptide.” When they played that last, the crowd finally woke from their beachside naps, leapt up and howled along with the chorus.

TV On the Radio
The award of Hangout’s Most Awkward Moment came when someone decided it would be a great idea to wear an afro wig to TV on the Radio’s set. A few songs in, Tunde Adebimpe  paused, leaned into the mic, and called out the guy to take it off, which was met with some applause and more uncomfortable shifting and staring at the sand. That said, their vigorous set was one of Sunday’s highlights. “Happy Idiot” was a new stand-out, joining classics like “Staring at the Sun” and “Wolf Like Me.”

Foster the People
I’ll never forgive the fact that Foster the People’s insanely catchy first single had me accidentally singing about a school shooting, but apparently thousands of other people had. The sand in front  of the Hangout stage was packed before their set even started and their  frontman Mark Foster turned on the charm as soon as he took the stage, knowing exactly when to smile for the perfect live photo. Their set was a well-run machine, just ripping through catchy song after song, all of them  guaranteed to also be stuck in my head.

Phantogram
On Sunday evening, some attendees were faced with a huge dilemma: do you go to Phantogram or My Morning  Jacket? Phantogram won out for the intro, since if you’ve attended a music festival in the last five years you’ve probably seen My Morning Jacket, and the My Morning Jacket set ran longer so you could catch most of Phantogram and half of MMJ. Sarah Barthel’s vocal performance just keeps getting better, their sound was great, and the inflatable  hamburgers flying around the crowd added a little spontaneity to the set.

My Morning Jacket
If you’re a sucker for Jim James and the rest of My Morning Jacket, their  Sunday set definitely nailed it. It included classics like “One Big Holiday” as well as songs from their brand new album, The Waterfall, including  “Tropics (Erase Traces).” If you had to duck out before Beck’s set, this was the best closer you could hope for: the sun setting over the beach with the sweet rhythms of My Morning Jacket ringing in your ears.