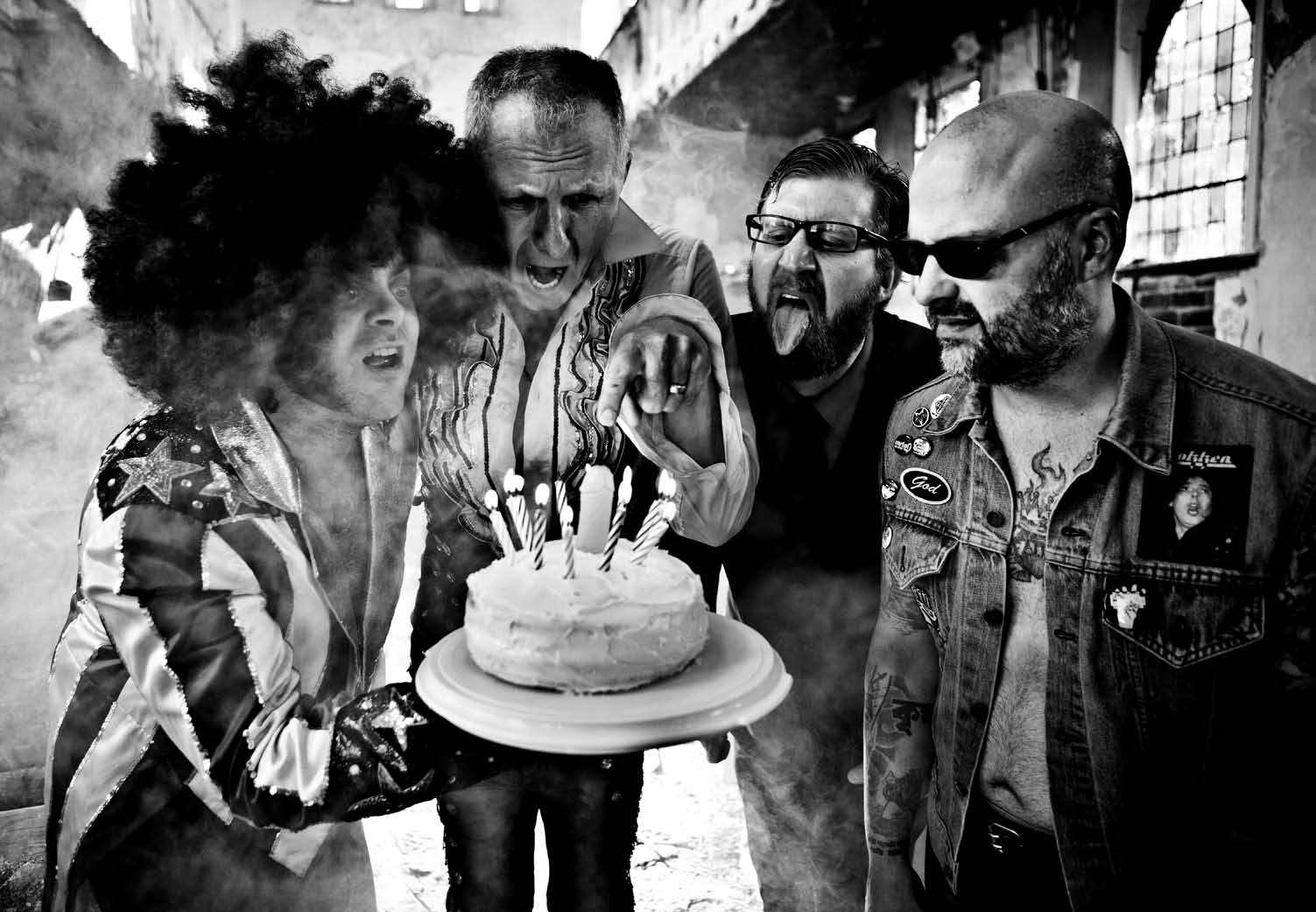 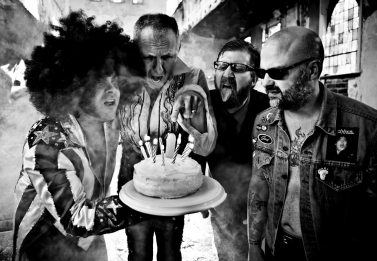 Back in the ‘80s when punk rock was really getting going, there were bands that stood for something and fought to be heard. There were bands who tried to give their peers a voice and explain what life was like for outcast youth. And there were bands that sought to educate and alert their fans to political corruption and social injustice. The Meatmen was not one of those bands. Instead, they sang about parasites, perverts, bodily functions, and how much the rest of the world sucks. They even made fun of other bands. They put the “low” in lowbrow, and made you laugh in spite of yourself. And they put on a hell of a show.

The Meatmen was formed in Michigan in 1981 by Robert Vermeulen, who became known as “Tesco Vee.” The original line-up consisted of Vee, Gregg Ramsey, Rich Ramsey, and David Howse. However, after just two EPs, Vee moved to Washington, D.C. and went on to release a solo album, Dutch Hercules (produced by Ian MacKaye). He then revamped The Meatmen, and the sound became more heavily metal-influenced. The line-up has changed often, but the band goes on.

Tesco Vee also started a fanzine called Touch and Go with a co-worker (a fellow elementary school teacher) back in 1978. T&G went on to become a record label, but since then, special editions of the ‘zine have surfaced, such as a paperback collection of the 22 issues, and a box set of reproductions of those same issues. He also briefly formed another solo project, Tesco Vee’s Hate Police, started collecting vintage toys, and released the first new Meatmen album of original material in about 20 years, Savage Sagas. They released a split 7” with Antiseen, The Tribute with Two Heads, in tribute of GG Allin and The Sex Pistols, and are about to hit the road together in support of Savage Sagas. When they stop here this month, it will be the first time The Meatmen have been here since they opened for GWAR in the mid ‘90s.

You’ve been really busy the last few years! After a very long stint in DC, did moving back to Michigan help put you back into your element?

Tesco Vee: Ya, fo sho… I’m a Michigan guy that left for jobs and there just happened to be a great music scene in D.C. as well. But, 17 years was long enough in that place. I’m happy as fuck to be back in the Mitten. Much better environment for making music here.

You helped start Touch and Go, a fanzine in the late ‘70s devoted to punk, hardcore, and a raw sense of humor. In 2010, you released a paperback anthology of 22 issues, and later, a limited edition box set  of replicas of the actual ‘zine. Any further plans for Touch and Go?

I’ve thought about it, but I am very busy with my own musical thang right now. The landscape has changed… Blah-blah-blogs clog that big series of tubes known as the internet; and, as much as I’d love to re-kindle those  halcyon musical days of yore by firing up the Xerox machine again, I’ll stick to making good punk rock music and collecting old toys!

The band has taken  interesting turning points throughout its  career, such as when you went  in a more metal  direction in the mid ‘80s.  Would you say Savage Sagas  is stylistically a collection of everything The Meatmen have done in the past, or were you looking to continue the evolution of the band’s sound?

I’d say it’s a nice mix of everything from the early rudimentary three-chord crash of the early days, the power chug and thrash of the ‘80s and ‘90s crunch,  along with a smattering of quirky offbeat shit. I’m known for like “The Ballad of Stinky Penis.” I’m damn proud  of this platter. It’s been 20 years in the making… Buy it, you cheapskate fucks!

The Meatmen Cover the Earth is a great mix of several styles of music. Did doing an album of cover songs  serve to conjure up a wide range of inspiration for doing some new originals, or was Savage Sagas  something you’ve been cooking  up for a while?

Ya know, I just take ‘em as they come and the Cover CD was something I’d always wanted to do. I’m a fan first and foremost, so getting to pay homage to some of my all-time fave tunes was a total blast. Everything from the Pink Fairies to 10CC to GG Allin to Black Randy and The Metrosquad… I think it turned out great. I knew I had another album of originals in my cranium. One of the songs was leftover from 1996, “Dinosaur.” That’s a long time to have something percolate before finally letting it out!

Comedy has always been a huge part of your music. Consequently, you’ve influenced many bands that followed to not be afraid to keep things fun. Were there any particular artists that influenced you to keep things comical when you were starting out? Have you ever found it difficult to be taken  seriously as a truly creative songwriter, due to the crude nature of the band’s brand of raunchy lyrics and riotous onstage hijinks?

Yeah, we’ve been dismissed as a joke band but I don’t care. I was influenced  by all sorts of stuff from Zappa, The Fugs, Dirty Party Records, anything naughty and funny. ”Ribald” is my favorite description for what I do. I just thought all the “hate Reagan” bullshit  was lame, so I made my career about  songs about poop and boners.

You’ve never been afraid to poke fun at other bands and celebrities. Have any of your antics caused a big stink with people not possessing a similar sense of humor?

“TSOL are Sissies” caused quite a ruckus, a story that’s well documented. Haha! And The Kory Clarke Dude Ranch crack in “Tooling for Anus” has the real Kory Clarke hating me for life. Just the sound of my name will send him into a hissy fit. Hehehe… 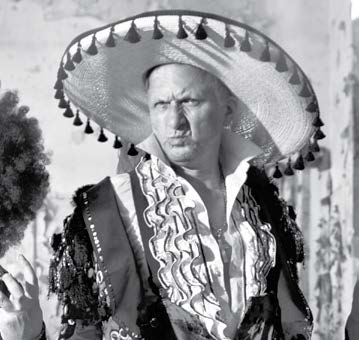 Speaking of poking fun at other  bands, was the show in New Orleans  purposely booked the same night as the Paul McCartney concert at the New Orleans Arena? Three down,  one to go?

Uhhh… Ya! Perfect timing. Pretty cool, eh? Our new best-selling shirt is the glow-in-the-dark “2 Down 2 To Go” shirt. Selling like crazy!

Your recent collaboration with  Antiseen—the split  7”, The Tribute with Two Heads, and the upcoming Southern tour—seems like such a perfect match. What made you guys start working together, and why is this just now happening?

Ya know, just in the last years have we started working together and it’s a great match. No clue why it didn’t happen before. Jeff Clayton is salt-of-the-Earth good people. Like a great man once said: “Some of the nicest people make some of the angriest music.”

Any plans on touring outside the US? France, perhaps, or maybe the Middle East?

Ha! We toured Europe in 2012, mostly Germany. No sense of humor at all. And since I hope to go back someday, I’ll withhold further comment. Let’s just say I liked the food, and I liked the scenery. I liked Italy, The Netherlands and Switzerland.

Tesco Vee’s Hate Police was a great side project. Have any of those songs made it onto the Meatmen setlist? Do you think you’ll go back to doing Hate Police after the Meatmen are finished touring to support Savage Sagas?

Nah… The Hate Police are done. When I switched bands in 2010, I did 13 shows as Hate Police for shits and giggles. Some people love that album as the best thing I’ve done and that’s cool… But no TVHP songs are currently in our set.

You’ve got an open call to anyone and everyone for vintage toys and collectibles, 45 record picture sleeves and albums, vintage magazines, classic red devil memorabilia, and “anything ABBA.” Any crowning jewels you’d like to take a moment to brag about?

Well, speaking of New Orleans, someone gave me a pair of ABBA clogs they found in the trash on the way to a show in 1995. I traded six shirts for ‘em! I love ABBA. Old toys keep me sane and yeah, I have a mega load of ‘em. The thrill is in the hunt. Sometimes folks bring me cool stuff to shows to trade and of course I love that. Robots would be my favorite things to collect, but Weird- Ohs Monsters and all that are a close second!

When were you an elementary school teacher? Were there ever  any issues when concerned parents discovered your ‘zine?

1978 to ‘81. I was never sussed out as a counter-culture punk rock hooligan, but it was close. Using the school Xerox machine for printing Touch and Go came in handy!

Lots of great bands out there. And with the demise of the record industry, the “get rich quick” element or motivation is no longer there, so people are playing music for all the right reasons now. I continue to go see bands ‘cuz there is nothing like the live experience. This will be my first trip to New Orleans in almost 20 years, so hopefully you crawdad-eatin’ weenbags will come check us out!

The Meatmen will be performing at Siberia on October 11th with Antiseen, The Pallbearers, and Before I Hang. For more info check out tescovee.com