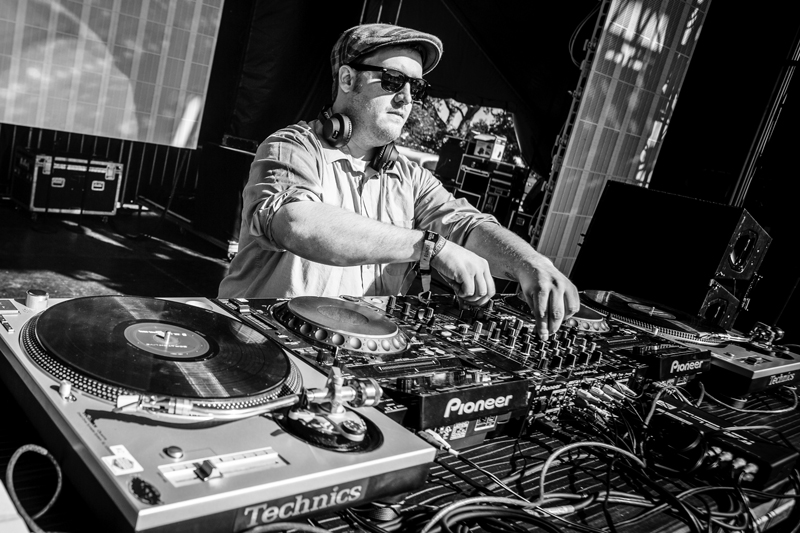 Six years in and it feels like among all the music festivals in New Orleans, The BUKU Music + Art Project is still the fresh new kid on the block, dropped on the Crescent City from some faraway exotic locale, like New York City or Jupiter. Below are our favorite picks for this year’s BUKU, from up-and-coming, accidental artists to those who’ve been on the grind since before the internet existed.

LIL DICKY
While working his first job as an advertising account manager, David Burd jokingly reimagined his monthly progress report as a rap video. He had never planned to pursue a career in music and his stated goal was “simply to get attention comedically, so I could write movies, write TV shows and act.” But when the video for his debut track “Ex-Boyfriend” went viral on YouTube, receiving more than one million views in the first 24 hours, Lil Dicky was born. Since then, Dicky has released 32 songs and 15 music videos, including the highly popular track “$ave Dat Money,” featuring Fetty Wap. His deft melding of humor and hip-hop landed him the cover of XXL magazine’s 2016 Freshmen Class alongside Anderson .Paak and 21 Savage. One can expect high energy, head-bobbing beats and possibly even a lap dance to a lucky festival goer if Dicky performs his romantic ballot, “Lemme Freak.” Whether or not Lil Dicky plans to make a long-lasting impact in hip-hop remains to be seen, but he has boldly stated, “I’m not leaving the game until I’ve proved my point.” —Morgan Lawrence

UNICORN FUKR
New Orleans’ own Unicorn FUKR (pictured above) returns to BUKU for his annual EDM set this year fresh off a European/U.S. tour a couple months ago with Use of Force, via the prestigious UK dubstep label Wheel & Deal. FUKR continues to focus on his musical output while making plans to take Church—his local Sunday night EDM showcase at Dragon’s Den—on the road for 2017. Meanwhile, FUKR’s label, Versed Recordings (co-owned with Quickie Mart and Organik), plans to release a bass music compilation for the spring. Look for a BUKU set that incorporates elements of a number of genres, from house/techno to dubstep/ bass music/drum and bass/grime. —Holly Hobbs 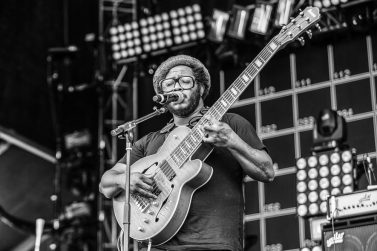 THUNDERCAT
It’s been about three years since Los Angeles bassist Thundercat (pictured here) performed one of the best shows I’ve ever witnessed at One Eyed Jacks. Draped in an actual wolf skin (head and all), he premiered the song “Them Changes,” a bouncy break-up song that could be mistaken for a cut from Hall and Oates’ greatest hits. He then immediately followed with “Tron Cat,” a slow experimental jazz number dedicated to his cat. This sort of unpredictability is the reason he has become the most interesting (and, frankly, weirdest) figure of the recent modern jazz renaissance—a scene that includes fellow L.A. artists like Kendrick Lamar, Kamasi Washington, and Terrace Martin (all of whom he has collaborated with). Originally starting his solo music career with sample-based electronic beats à la Brainfeeder label-mate Flying Lotus, he has recently settled into a mixture of experimental jazz and funk. By the time you read this, Thundercat’s new album Drunk will be out, the lead single off which is an airy yacht rock jam featuring Michael McDonald and Kenny Loggins. It’s doubtful those two will be in attendance at his Friday BUKU performance, but it will definitely be worth it to see him working his genre-hopping jams in a live festival setting. —Brandon Lattimore

YOUNG THUG
If New Orleans can embrace its son Lil Wayne, surely it has love for Wayne’s spiritual successor. Hailed by Birdman as “the future of music,” Young Thug has certainly been changing the game. The Atlanta native (born Jeffery Lamar Williams)—known for his idiosyncratic vocal stylings and sometimes non sequitur lyrical approach—has seen acclaim from a series of unreal mixtapes, the last of which being 2016’s eponymous Jeffery. It’s Thuggers’ unorthodox, sometimes mumbling take on hip-hop that has paved the way for renegades like Lil Yachty and Lil Uzi Vert to reach mainstream success. Though he hasn’t released a major label album yet, his collaborations with Gucci Mane, T.I., and the aforementioned Birdman has put him on an amazingly successful path, even garnering an appearance on Kanye West’s latest album, The Life of Pablo. BUKU attendees will certainly be treated to a manic, impassioned performance from Thugger, one that will likely be remembered as a fest highlight. —Corey Cruse

SOPHIE
Certainly among the most texturally complex artists playing BUKU, London’s SOPHIE uses raw waveforms to create noises replicating everything from the sound of fizzing bubbles to latex-on-latex rubs. A collaborator of notables like Madonna, Charli XCX, and fellow festival performer Cashmere Cat, he has been making a name for himself by sounding like none of his contemporaries at all. More akin to Oneohtrix Point Never than Skrillex, Samuel Long presents a hyper-realistic take on electronic dance music, making the normal and accepted feel grotesque, and the possibilities of the genre seem boundless. —Corey Cruse

AMINÉ
Rapper Aminé’s debut single “Caroline” is everywhere right now. The track—a throbbing, playful tribute to young lustful, love—was released after the Portland, Oregon native signed a deal with Republic in 2016, and it peaked at 11 on the Billboard Top 100 in September of that year. While Aminé holds established mixtapes like Odyssey to Me and Calling Brio under his belt, the single “Caroline” marks his skyrocket into mainstream music. He chased the success of this release with another hit single titled “Baba” shortly thereafter. Aminé started rapping in high school, writing dis tracks for his basketball team, and reportedly never took his music career very seriously until post-graduation. Until now, the Portland rapper worked quietly on productions with artists like Kaytranada and Tek.Lun, but it seems apparent that he’s ready to bust into the mainframe. He recently refined his sound while recording Calling Brio in 2015, and his music boasts an assemblage of ties to his Ethiopian roots, electronica and house music, afrofuturism, R&B, and hip-hop. —Maeve Holler 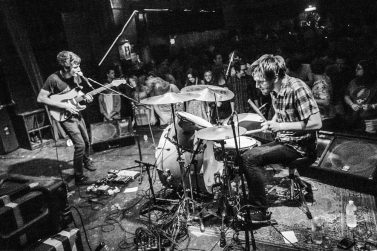 CADDYWHOMPUS
Local dreamy experimental rock band Caddywhompus (pictured here) may seem like something of an anomaly in the BUKU lineup. But for a local festival largely dedicated to powerful rhythms and out-there, entrancing melodies, they may be one of the most clever additions to the bill. The single from their upcoming third LP, Odd Hours, was just previewed by NPR and shows that the duo still have just as much freaky energy, psychedelic logic, and love for pop as they did while grinding at Loyola. Sean Hart’s drumming drives Caddywhompus and their audience through bombastic dins, contemplative lulls, and all kinds of catchy moods; all while Chris Rehm’s sprawling riffs and extensive arrangement of gear liberates the guitar from most terrestrial concerns. His androgynous vocals chime within each massive, ethereal song, coloring them with unconventional but ultimately relatable emotions. This all makes them very likely to appeal to fans of any number of experimental rock bands that draw influence from popular ‘60s rock, such as My Bloody Valentine, Deerhoof, or Animal Collective. —Ben Miotke

CASHMERE CAT
For many, Norway’s DJ/producer Cashmere Cat first floated onto their radar with his 2012 EP Mirror Maru. The title track features squeaking bedspring audio that helped to make the song a hit, earning it a place on mixtapes near and far. With a heavily melodic and genre-bending sound, Cashmere Cat has gone on to work with artists like Selena Gomez and Ariana Grande, while producing for some of the biggest names in the mainstream, including Kanye (“Wolves”) and Britney (“Just Luv Me”). In 2016, he began releasing tracks off his much-anticipated debut album, Wild Love, which he’ll bring to BUKU along with his unique brand of intensely enjoyable, melodically intricate, and ornate composition. —Holly Hobbs

VINCE STAPLES
23 year-old Long Beach native Vince Staples is primed to turn Mardi Gras World into the Staples Center. The Cutthroat Boyz front man rose to recognition with verses on Odd Future’s albums and his collaborative mixtape, Stolen Youth, with fellow underground heavyweight, Mac Miller. Staples’ debut album, Summertime ’06, earned him critical acclaim that landed him in the 2015 Freshman Class for XXL magazine and garnered him a record deal with Def Jam. With four mixtapes and a tour with Schoolboy Q under his belt, Staples is making his way through the festival circuit. His most recent outing, a seven-track EP and short film entitled Prima Donna, featured A$AP Rocky and increased his fan base significantly. Whether you only know his most viewed video, “Norf Norf,” or his entire catalog, Vince Staples owns the stage with a confidence that assures dedicated fans and new listeners alike will enjoy the show. —Morgan Lawrence 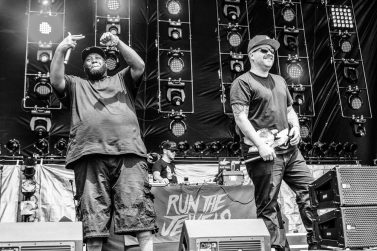 RUN THE JEWELS
With Run the Jewels 3 just released and endless streams of appearances— including a great recent NPR Tiny Desk Concert—Killer Mike and El-P (pictured here) continue to grow their musical empire with integrity and talent. Meow the Jewels, their crowd-sourced 2015 all-cat opus (for which all proceeds went to charity) grew their fan base even further while showing that, in everything Killer Mike and El-P do, they are able to combine political commentary, absurdity, resistance, and humor in a way that feels real, enjoyable and effective. Wait for performances of “Talk to Me” and “Panther Like a Panther” at BUKU off RTJ3, as they’ll be high points. —Holly Hobbs

DEADMAU5
“Dead Mouse Guy” became the moniker for Joel Thomas Zimmerman after he found a dead mouse in his desktop when he was a teenager. Now, the masked, Toronto-based producer and DJ is one of the most well-known names in the EDM and house music realm alongside Kaskade, Skrillex, and Daft Punk. Most can only recognize him in his giant Mickey Mouse-shaped helmet. With six Grammy nominations and almost 20 years in the music industry, deadmau5 doesn’t plan to slow down. He began his career in 1998 and mastered his way to his debut album, Get Scraped, in 2005. His self-released compilations Project 56, deadmau5 Circa 1998-2002, and A Little Oblique inspired up-and-coming producers and DJs to promote and release their own music. Now with his own record label, mau5trap, more artists can master their rave. —Morgan Lawrence

$UICIDEBOY$
I have extremely fond memories of seeing Aristos Petrou (a.k.a. Oddy Nuff, a.k.a. Ruby Da Cherry, a.k.a. Snow Leopard) play drums in the seminal New Orleans punk band the Vapo Rats. Since those times, however, he and his cousin Scott Arceneaux (a.k.a. $crim, a.k.a. $lick $loth, a.k.a. $uicide Christ) have been setting Soundcloud and the rest of the world aflame with their raw, uncompromising raps and production. The backed-up hype machines and G59 Records label heads have made their demented brand known through a series of “Kill Yourself” tapes, with the 20th one expected to be the last released this year. This is promised to be followed by their proper debut album, I Don’t Wanna Die In New Orleans. Expect the crowd to be as hyped as $uicideboy$ presumably are to be playing their hometown. —Corey Cruse

AF THE NAYSAYER
Maybe you’ve seen NOLA-by-way-of L.A. producer Amahl Abdul-Khaliq at one of his traveling Dolo Jazz Suite showcases. Maybe you’ve seen him perform at another promoter’s show. Maybe you’ve just heard last year’s Armor Wing Battle Unit. In any case, if you truly keep up with what’s happening in New Orleans, Amahl and his music have likely left some imprint. This vegan, straight-edge producer makes the music of club dreams. Hard hitting bass is matched with ethereal atmosphere to create a unique, captivating sound. With credits as wide reaching as production work for nerdcore rapper Mega Ran and Taiwan’s Juzzy Orange, Amahl has cemented his status as one of the greatest beatmakers New Orleans has to offer. —Corey Cruse