Hurricane Maria struck the island of Puerto Rico on September 20th. Since then, countless lives have been changed forever and at least 500 people have died. As a Nuyorican (New Yorker born of Puerto Rican descent) I have read the news with tears in my eyes. I felt rage and grief for the island of my parents, my ancestors, my people. When I went back out on the road with my band, Hurray for the Riff Raff, I felt pressured to answer questions I honestly did not have the answers to. Throughout my musical career, I stumbled into representing two places I deeply care about but I am not from: New Orleans and Puerto Rico. These two places made me who I am, but I am their adopted daughter. So it has been important for me to learn to listen to folks who know and not speak on topics I do not fully understand. So with that, I am excited to share the story and work of Raquel Berrios of the group Buscabulla. Raquel has started an organization called PRIMA (Puerto Rican Independent Musicians and Artists)—and who but New Orleans folks can better recognize the importance of independent art and music in regards to disaster recovery? I could write forever about the similarities I see between the culture and histories of Puerto Rico and New Orleans, but I’d rather let Raquel tell her story. I’m sure you will find similarities, and I hope you will contribute to PRIMA and support the artists of Puerto Rico.

First off, please let the readers know about yourself and your group Buscabulla, which is honestly one of my favorite bands, ever since I found your music through the documentary Mala Mala years ago.
Buscabulla is the Spanish language experimental pop project made up by myself and my partner Luis Alfredo del Valle. We were both born and raised in Puerto Rico but have been based in New York City for almost a decade. My background is in design, and when I met Luis back in 2011 I was collecting records, DJing, and making weird demos on my laptop. Luis is a multi-instrumentalist and producer and had played in bands back in P.R. since his early teens. We instantly connected musically and started making tracks without any real expectations. People responded and in 2014 the opportunity arose to produce our first EP with Dev Hynes of Blood Orange. That EP was later released by Kitsuné and the momentum has been building ever since. Our second EP, which we produced entirely by ourselves, was self-released in early 2017.

Where are you from in Puerto Rico?
I am from Trujillo Alto, like a 15 minute drive from San Juan. Born and raised.

What are some of your earliest memories of an artist community on the island?
When I was a teenager and in my early 20s, I used to hang out in raves and clubs in San Juan. There was a pretty cool independent electronic scene, with producers, DJs, and artists all collaborating. There was also an awesome Spanish language hip-hop scene, with great producers and MCs that rapped about life and politics in P.R. I was pretty inspired by both these scenes.

Who are some of the Puerto Rican artists you look up to?
I have always admired salseros from the Island: Ismael Rivera, Roberto Roena, Marvin Santiago, to name a few. The Salsa era is my favorite in Latin music history with its coolness and charismatic, quirky singers. Also Yarimir Cabán MIMA—one of the first girls I saw doing pretty dope original music on the Island (and an incredibly talented vocalist and musician). 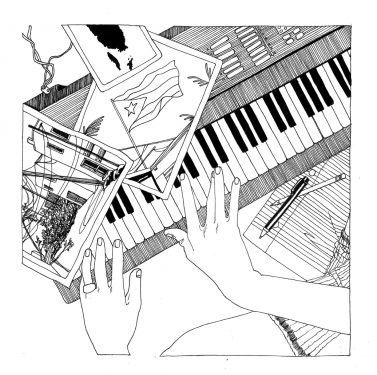 When did you start playing music?
I messed with my dad’s guitar since I was a teen. But it was after 30 that I learned piano and got serious about writing my own songs.

What is the independent music scene like on the Island?
It’s small, communal, and very DIY. It’s very different from the U.S. independent scene. Many styles coexist in the same spaces because of its scale; it’s not dominated by one style of music. It’s electronic, reggae, singer-songwriter, psych, punk rock, and salsa all mished mashed together.

Please tell us what your experience has been like since Maria hit.
Maria just messed things up big time. I cannot imagine anyone from Puerto Rico or related to a Puerto Rican who has not felt the weight of this phenomenon. The first month was so surreal, not being able to communicate with loved ones, and being glued to our phones looking at disaster pics and imagining the worst.

How was the area you are from affected? What are some of the experiences of your family and friends?
The place where I grew up lost so many beautiful trees; and to this day my dad still has no power. Someone told him it could still be a month and a half before power is restored. Everyone describes the storm as being the most terrifying thing they have ever experienced. I’ve lived through crazy hurricanes, but friends back home kept saying it had no comparison to previous hurricanes. The amount of damage has been pretty unfathomable and the after-effects have left everyone tired and depressed. Daily life is incredibly challenging on so many levels. The already weak economy has been severely hit and things are very uncertain.

I know you and Luis live in NYC; how has the experience been to be far away while this crisis is unfolding?
We felt so helpless when this thing hit. It was not easy to get a ticket and fly home, especially us who have a three-year-old girl. But we also felt very motivated to find ways of helping from a distance, volunteering time with supplies, playing a ton of benefit shows, and even starting a fund for independent musicians on the Island.

“It is very urgent to keep a whole generation of musical culture from being washed away.”

Before Hurricane Maria, the Island was already dealing with issues like the debt crisis, rapidly dwindling availability of doctors, and the defunding of universities. Please tell us what your perspective of life on the Island was like leading up to this disaster.
Well, all those things are true, but there was also a lot of optimism too. Small businesses kept popping up despite the challenges of government inefficiency and a younger generation was starting to look at alternative ways of creating new economies. People were starting to understand how important it was to support local business and farmers and to really work hard and not give in to the temptation of leaving P.R. for better opportunities.

From your perspectives, how has the distribution of aid been handled on the Island? Does it differ by region?
Both the P.R. government and U.S. government sucked with immediate aid distribution. It’s all you ever saw in the news: community after community interviewed and saying how they had seen no government officials in their areas or any aid in weeks. It’s been an organizational nightmare; they just couldn’t get their act together. I think it has been pretty inefficient throughout the entire Island. The most efficient aid distribution has come from small grass roots efforts from inside and outside of the Island.

What is your opinion of how the administration has responded to this crisis?
It feels like they could do more, be more sensitive to a tragic situation, and quit playing politics with people’s lives. But the same is true for the government in P.R.. If anything, this whole experience highlights the need for self-reliance and the need to build sustainable, self-sufficient systems where Puerto Ricans can have real ownership regardless of the participation of the state.

Has the mainstream media been sharing accurate information about the crisis and the quality of life afterwards?
Yes, I think so. The mainstream media coverage has been essential in telling the truth of what has been going on in P.R. The local newspaper and some networks on the Island have very strong political ties with the government and there was a lot of information that was being covered up. I have been very surprised with the work of CBS, Huffington Post, etc. and their in-depth journalism. These stories have kept the world informed of our situation and has attracted additional aid and relief efforts.

You have a platform being a popular musician with a social media presence. How has that experience been for you since the hurricane?
I immediately felt a sense of deep responsibility and the need to use our platforms to inform fans and friends of relief efforts, share critical news, and announce benefit shows and charities. There was suddenly no space for anything else in our social networks. Everything else seemed very shallow. Times like these make you realize the power that you have of helping people through your followers and that just using it for pure self-promotion seems like an incredible waste of data.

How have independent artists and musicians been affected by Hurricane Maria?
After Hurricane Maria, many Puerto Rican musicians and artists are leaving the Island because the situation is tremendously difficult. Many have lost their gigs, equipment, studios, homes, and income. The independent musician’s way of life was already difficult; and after the disaster they can hardly stay afloat.

Can you tell us about PRIMA?
PRIMA is a musician-led fund to help sustain the independent music community in P.R. after Hurricane Maria. PRIMA came about when songwriter Ani Cordero and I were desperate to help after the storm ravaged Puerto Rico. In the weeks following the hurricane, news began trickling in that our friends in the music community were struggling. It is very urgent to keep a whole generation of musical culture from being washed away. We reached out to our network of musicians and friends, brainstorming on the best approach, and found an eager partner in the Bronx-based non-profit Pregones Puerto Rican Traveling Theater, which has been dedicated to supporting Puerto Rican artists in all disciplines for decades.

How can folks help the artists of Puerto Rico?
Friends can donate directly through primafund.org. Because we are partnering with Pregones, the donations are 100% tax deductible. The PRIMA fund will provide $500 emergency micro grants to individual independent musicians based on the Island, with additional grants extended to supporters of this vital cultural ecosystem: DJs, illustrators, graphic and web designers, sound engineers, music photographers and videographers, writers, and independent show producers, who are an integral part of this community.

What are different organizations you trust?
I trust small Island-based organizations that have been doing amazing work for the past few years even before the storm hit. Casa Pueblo is an amazing organization: their commitment to Adjuntas [a municipality in Puerto Rico] and their people has been very inspirational and it shows. I also trust Taller Salud in Loiza, and G8 in Caño Martin Peña to name a few.

What role do you feel art has in the legacy and also the future of Puerto Rico?
Our artistic expression has always been at the crux of Puerto Rican life and identity. My hope for the future is that through art we can hone in on our truest, most righteous collective selves and rise above the tedium of everyday struggles, reaching towards spiritual fulfillment and a vibrant and exemplary society which we can all be proud to call our own.

What is your hope for the future of the Island?
My hope is that we can harness the talents of millions of Puerto Ricans living abroad, to come back to the Island and apply the knowledge they’ve amassed toward building a Puerto Rico that inspires the world.

For more information or to donate to PRIMA, go to primafund.org. You can also check out Pregones Puerto Rican Traveling Theater at pregonesprtt.org; Casa Pueblo at casapueblo.org; and Taller Salud at tallersalud.com. For more info on Buscabulla, check out buscabulla.com.