Jawbreaker fans are the Trekkies of punk rock.

I was sitting against the wall of the Faubourg Marigny Community Center (currently the Maison) waiting for an Avail show to start. I had started my afternoon in Tower Records seeking out the latest issue of Cometbus, which I was reading next to a puddle of malt liquor and possibly vomit that had been splashed together outside of the previous night’s Second Hand gig. A goth couple strolled passed and from his black lipsticked mouth the male said, “What are you two? Some kind of stupid promo campaign?” I looked up quizzically and out of the corner of my eye I saw someone else look up at this Love and Rockets album cover firing heat seekers our way. We then turned and looked at each other. Sitting 15 feet from me was Stefan Boone, reading the same issue of Cometbus and wearing the same Morton Salt Girl knock-off “When it Pains, it Roars” Jawbreaker t-shirt (a shirt that was recently mailed back to me when my co-star in another failed relationship found it while moving). Stefan and I became instant friends, which led to a total music/skating scene exchange program between New Orleans and Baton Rouge. It’s a band that forms bonds. Jawbreaker fans are the Trekkies of punk rock.

If you’ve ever lived in a communal punk house, like I did, “West Bay Invitational” most likely could have been the unofficial soundtrack to your homelife. “The Ranch,” as our house was known, hosted weekly grindcore, screamo, and riot grrrl shows filled with local punk celebrities and whatever train hoppers our roommate Kelly had taken in that day. My leftovers were always eaten by some stranger, the garbage can was filled with cheap beer cans, the sink overflowed with dirty dishes, Darby was probably drunk and yelling obscenities off of our balcony at the co-eds living across the street in a homemade “Drunk on the Blood of Christ” t-shirt, the bathtub was stained with hair dye, and it always smelled like sweat. My parents hated it. All of these things were happening in the background as I was trying to manage a relationship with a woman who didn’t quite have the same appreciation for the counter-culture life I was carving out. She just liked my jokes.

If there is a quintessential punk rock love jam album out there, Jawbreaker’s 24 Hour Revenge Therapy (rereleased in October by Blackball Records) is it. If a potential partner gave you a mixtape with “Jinx Removing ” on it, you knew you were golden. 24 Hour Revenge Therapy was a big part of those early substantial relationships, the ones you forged towards the tail end of high school, as you were moving out of your parents’ houses. You were dealing with your first real tastes of adult relationships — living together or just crashing at each other’s houses for days at a time. I was listening to Blake belt out “We’re too smart to watch TV. We’re too dumb to make believe this is all we want from life” as I stared at the sticker- covered television set I had in my tiny apartment on the campus of the college (I eventually dropped out of). That TV had no antenna or cable connection. It was only connected to an equally cheap and malfunctioning VHS player that repeatedly played bootlegged skate videos, a Minor Threat live show, or The ‘Burbs (the only movie my roommate Kevin Comarda and I owned). Likewise, in “Ashtray Monument” when he sings “I did the dishes while you read out loud,” it still brings me back to the days of living with my first cohabitation companion—dealing with trying to make things work while being poor and learning how to live with someone else. I’d cook and do the dishes while she read from poetry books, art history textbooks, and zines we picked up at shows. It’s all of those little details of what our lives were like that made those songs so connectable. This record is the perfect time capsule for the ‘90s punk scene. You lived every song, and that’s why it sticks to your ribs. 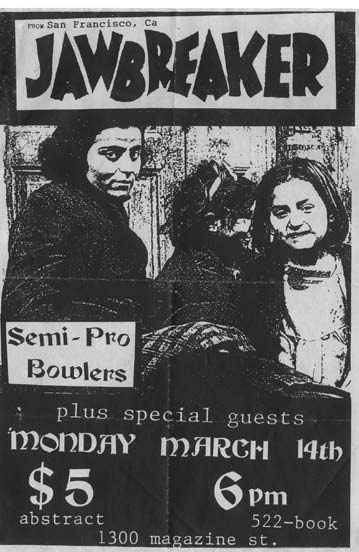 In my previous installment of gushing about Jawbreaker (issue # 102), I labeled Unfun as the low-budget action thriller and Bivouac as the art-  house film. In keeping with the movie metaphor, 24 Hour Revenge Therapy is a coming-of-age love story set in the context of train hopping, broken smiles, cigarette butts, scene politics, sex in bathrooms, and an awareness that we may not be as clever as we think we are. It’s a loved and lost and perhaps loved again story that combines the straight-forward raw punk energy of Unfun with the artfully crafted  weightiness of Bivouac. It’s arguably the best pop-punk record. It’s as dark as it is energetic. It’s biting: “I’m coloring outside your guidelines. I was passing out when you were passing out your rules. One. Two. Three.  Four. Who’s punk what’s the score?” It’s also an album of vulnerability. In “Outpatient” and “In Sadding Around” we get a glimpse into the health issues that lead to the drastic change in Schwarzenbach’s voice, which would be on full-display on the polarizing  follow up, Dear You. That moment from “Do You Still Hate Me?” when his voice cracks while pushing through the line, “I have a picture of you and me in Brooklyn,” sums up the whole record. Our failures are as important as our successes. Our longings keep us creative.

Recently I shocked someone with my love of old soul and R&B records. As they expressed their disbelief that I liked Otis as much as Milo I jokingly responded, “You can’t always fuck to Jawbreaker.” However, after listening to the remastered reissue of this record  on repeat over the past few days, I’m ready to hang my clothes up on the floor and put some faith in a closed door.