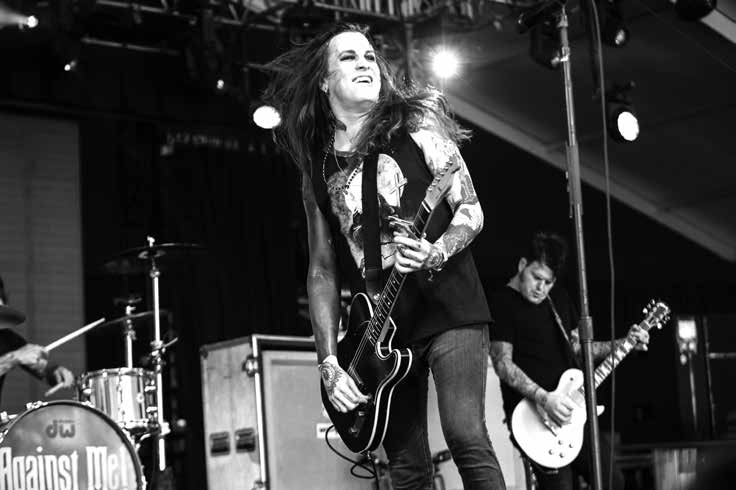 Having just wrapped up its 14th year, Bonnaroo still stands as one of the biggest, most diverse music and arts festivals in the world. For better or worse, that means a little something different to everyone. But for anyone who has actually attended, it’s always discussed with a certain degree of reverence. I am no different. My nine- year residency and annual recaps are simple testaments to my layered relationship with the multifest. In the context of an emotionally turbulent year, I found it difficult to reconcile any type of relevance in this old friend and a lineup to which I didn’t necessarily connect. It’s okay, though. I certainly wasn’t going to be one of those ‘Roo veterans that talk about how it used to be, man. It’s funny—it’s almost like an ex you dated for a long time and you’re trying to figure out where it went wrong. Maybe we were focused on different things this year; maybe the age difference became more apparent; maybe she’s just really into EDM right now. Yes, these are all true. But that doesn’t mean the energies are any different. The lineups will always change, adapt, diversify, etc., but there will always be more than enough to see and do.

With so much ground to cover, you would think that being free of any specific commitments would make this thing easier, when in actuality, it just made it that much harder to commit to anything at all. So I dove in head first. Within the first two hours, I juggled sets between Glass Animals, The Growlers, Courtney Barnett, and Tove Lo (how’s that for festival depth on opening night?)— none of whom disappointed, of course. But my first special moment found me front and center in the photo pit at Benjamin Booker—a killer rock-n-roller by all accounts, but I think I was more or less just buzzing about the exclusivity of my position between audience and band. Opening night energy is unparalleled, and I was lucky enough to have a front row seat!

On Friday, I started the day with a stiff coffee and a press conference that included comedian Nick Thune, whose interview played more like a branding sales pitch: “They’re like wet wipes made into mittens and they’re perfect for these festivals. So, if you wanna just go ahead and hashtag Shittens, I’ve got a few freebies left.” I told him I would get the word out. #Shittens.

From the cool shroud of the media tent, I walked out to see Moon Taxi releasing hundreds of giant silver balloons, turning the thick crowd into a collective disco ball that fired back at the sun. I was unfamiliar with this band before seeing the show, but they are now riding high on my list of fun discoveries this year. As demonstrated by Slayer and Against Me!, punk rock is alive and well at the ‘Roo. Earlier in her press conference, Laura Jane Grace of Against Me! spoke about the size of Bonnaroo’s voice and the incredible opportunity they all had to communicate positive messages of equality to so many open minds—a message well-conveyed and received throughout the weekend.

Luckily, I was able to run and catch most of Alabama Shakes, who rivaled Gary Clark Jr. and even Earth, Wind & Fire for the “most soul” award. Oh right, and then Earth, Wind & Fire brought out Kendrick Lamar and Chance the Rapper. Never a dull moment. Out of the haze, I wandered over to my other new favorite discovery, Sylvan Esso, who was playing their first show back in the U.S. after a lengthy world tour, and it showed (in the best way possible). The electronica duo had a sultry chemistry that had them both mugging for the camera. Tears For Fears wins a few major moments in my book—“Everybody Wants to Rule the World” is the coolest way to start a set, and covering Radiohead’s “Creep” really tapped into that energy that keeps me “on the farm.”

Saturday would turn out to be a bit of a whirlwind. Somewhere between Belle & Sebastian (who played part of the Dukes of Hazzard theme song), The War on Drugs (who had me longing for a Kurt Vile show), Childish Gambino, and Jamie XX, I was able to stop my head from spinning long enough to enjoy a prosciutto pizza in a field with My Morning Jacket. Now, I know they’ve played here several times before, but this was the first time I was really able to sit and take it in. A beautiful show on a beautiful, cool night. Against my better judgement, I dragged myself out to see Tycho at 2:00 a.m. It was kind of a perfect soundtrack to my already dreamlike state. Then I woke up back at my tent—wait, I did go see that, right?

Sunday was a rare opportunity for an easy day. So, it was a perfect time to run into Dan Fox, our fearless leader at AG, who had Hurray for the Riff Raff in tow with him. We were able to catch up over some much-needed, well-deserved beers. Hurray graced the Bluegrass Tent and represented New Orleans with beaming pride. It’s always fun to see a bit of hometown out there—a true highlight that I had been waiting for all weekend.

My biggest moment turned out to be one of my last. It was from Florence + the Machine. Not that I didn’t expect them to be good, but as it turns out, they are pretty fucking amazing! Florence Welch is a hero performer. During most songs she runs the length of the stage, down into the audience and back, her voice never faltering from perfection. “Shake It Up” and “How Big, How Blue, How Beautiful” were grandiose, but the floodgates really opened up when she called a young fan up on stage for a hug just before launching into “Dog Days Are Gone.”

It’s moments like these that will stick with me forever. They remind me of why I fell in love with this exhausting beast in the first place. Sometimes I feel like these recaps are just long-winded versions of, “Well, I guess you had to be there.” I’m just glad I was.