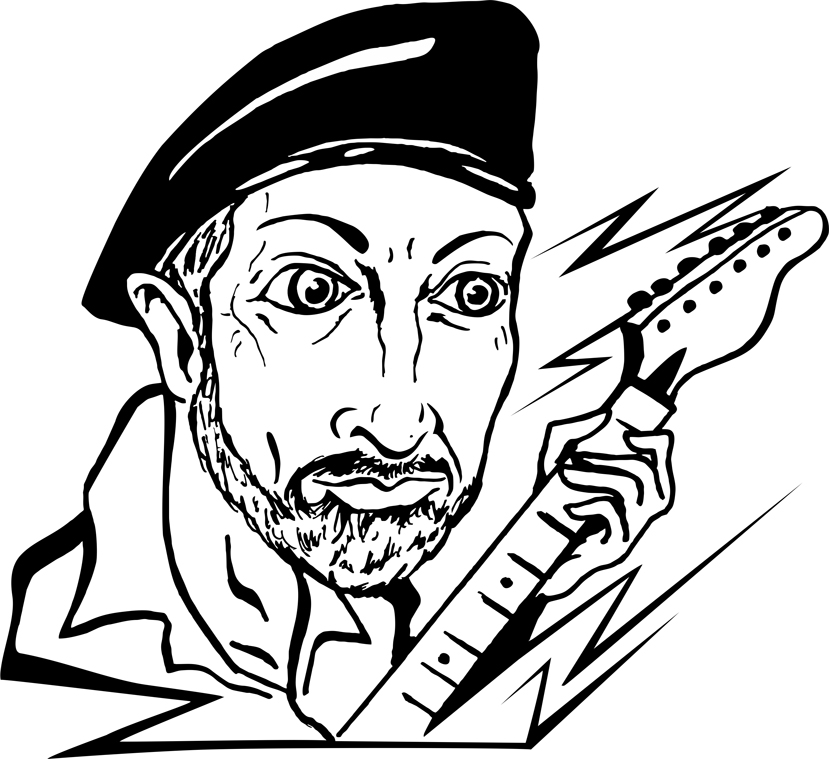 John Peel once described him as “the best-kept secret in music.” More than five decades later, Richard Thompson is still a legend. At 67 years-old and 25 records to his name (not including his former work with folk band Fairport Convention), Thompson draws inspiration equally from Scottish dance music, ‘50s rock’n’roll, and jazz. Whether he’s sketching out the the heaven-forfeiting desire behind “Batsheba Smiles” or his rich interpretations of Joni Mitchell’s “Woodstock” and Britney Spears’ “Oops! I Did It Again”; he possesses a style and energy that borders on the mystical. I spoke with Thompson about his influences, the current state of the record industry, and religion, in advance of his upcoming tour.

I read that you grew up around some musical family members. How did you learn?
I had an older sister, so when I was six, she was buying “Rock Around The Clock” by Bill Haley and stuff like that. I could hear it through the bedroom wall, and I would think, “Wow, this is the greatest music, this is fantastic.” And from about the age of six, I asked my parents for a guitar: it was the coolest thing in the world to have. So my parents bought me toy guitars every Christmas that didn’t work. [laughs] My father was a lapsed guitar player: he played during the 1930s and 1940s. His guitar was damaged, and he glued it back together, and it was a playable instrument. My father had Louis Armstrong and His Hot Five, so I listened to that at a very early age. From the age of 15 or 16, I could get into the clubs more. And from the age of 15, I was playing in bands.

You once told The Guardian, “The range of musical styles of that moment [in the 1960s]
was fantastic, and possibly unprecedented, and the record industry had no clue what was going on, so anyone could make a record.” How do you think that has changed since you played with Fairport Convention all those years ago?
Well, it has all gone down the toilet really, hasn’t it? I think, even in the 1960s, the record companies would scramble to understand what was going on. So you had psychedelic music, you had blues and R&B, all these things branching out from what was considered the underground, and the record companies are scratching their heads and saying, “Oh my goodness. We don’t understand this. We better sign everything.” So that’s what they did. And at some point, the industry managed to kind of groom it a bit more and turn it into something more widely passable. So there are kind of cycles where that happened. The most successful hip-hop acts and electronic-dance acts, there’s a certain beat and kind of sound that fits. That’s popular music. Everything else is a parallel culture or subculture. I’m probably in there somewhere, a dinosaur of subculture. [laughs] There were so many influences coming in. The Beatles were bringing Indian music into popular music. People liked the people who were pioneering certain recording sounds that were basically invented by people like Les Paul, but they were filtering them into pop music. So you have phasing, flanging, various kinds of tracking. And now you don’t have that mass of influences. Even if you have a subculture like Americana, which is a very healthy, growing thing, it’s still predictable to an extent.

Andy Gill [from Gang Of Four] once told me that the most important genres of music were punk, reggae, and disco. Do you have a few subgenres or subcultures that influenced you the most?
Interesting choices. [laughs] It’s tough, you know? I listen to a wide variety of music. Louis Armstrong, Jerry Lee Lewis, and Maria Callas; I’ll pick those three.

You also said, “I always thought it was important to be counter to the counter-culture.” Is this still your goal, and if so, how do you counter the counterculture—
—without becoming the culture?

Are you still a practicing Sufi Muslim?
Yes, I am.

How does your religious outlook affect your interest in early and World music traditions, or vice versa?
I think music is very spiritual stuff. I’ve always been a spiritually-inclined person. I was always looking for something, looking for answers to that kind of question. I think Coltrane makes very spiritual music. I can see where there’s a door to something else. I can see what you believe in—whatever your morality is, whatever your philosophy is, whatever your religion is—that’s something that informs everything that you do. So if you’re a woodcarver or a film director or if you’re a milkman or whatever you do, that’s something that affects what you do every single day of your life.

Well, speaking of, you mentioned Coltrane. How do you make your faith universal in your music so that you don’t find yourself preaching to the choir regarding religion, like the way Leonard Cohen has taken Buddhism and put it into his work, or the way Coltrane did with A Love Supreme and
Ascension?
Well, you have to speak to people in a language that they understand. And you also have to speak to people in a way that they will accept. So in some ways, it’s better to be less specific. I think it’s a subtle process, putting ideas across in layers, if that’s what it takes.

As a single dad/divorcee myself, may I ask how your divorce and experience of fatherhood has affected your ongoing solo career?
I think [divorce] is the worst possible thing. If you have children, then the children suffer, and it’s something that they have to deal with (sometimes for decades). So that’s a tough one, it’s just something you have to work on and keep on top of. I’m on the road at least half the time, half of my time. So that gets hard to spend time with kids, sometimes. You have allocated weekends. Sometimes you’re on the road and then miss your allocated weekend, and you try and shuffle things to—[sighs] it’s tough, it really is tough. It’s far from ideal circumstances. Then you have to find a way to deal with it. Everybody hopefully comes out the other end whole and happy.

From the beginning of your solo career, you received an eclectic mix of success in terms of critical reviews and sales. How do you balance your feelings when you feel like you’ve personally succeeded on a record, but that doesn’t necessarily overlap with critical success or sales? Do those things matter to you?
I think I’m lucky to be able to earn a living as a musician. Not many pretty good musicians can say that. I feel privileged, really. Would it be nice to get more people at a concert? Always, that’s always true. If I got slightly bigger in terms of success, I wouldn’t have to think about nickel-and-diming a band tour. I’d love to play more with a band as opposed to solo. I’m happy, but I’ll never actually be content with where I am because of this ambition that you always want to do your best, and that kind of drives you on.

You’re playing during the first weekend of Jazz Fest. Depending on your tour schedule, do you use it as an opportunity to get out and see someone at a blues club or go to a festival?
I love Jazz Fest, I really love Jazz Fest. I long for a time machine to go back to Jazz Fest in ’79 or something and see Jazz Fest then. You have the Gospel Tent, you have great Cajun music, so the local styles are still thriving. I love folk festivals. I suppose what gets me out the doors these days… if I have time off, I’ll go see a classical concert. And I love the opera. I’ve been listening to rock music so long, it doesn’t surprise me the way it used to. I need to be more harmonically challenged when I go out and listen to music.

As a musician, how do you continue to challenge yourself? How do you want to challenge yourself as you keep putting out new records?
Sometimes, you kind of put one foot in front of the other. I’m going to have to find a new tuning; I’m going to have to find a new fingering; I’m going to have to develop some kind of right-hand technique. Another thing is, you might want to do a different kind of album this times around: all about drums, or drums and melody. Just thinking “I’m going to see what that does.” The important thing is to go forward and be excited about music and be challenged by music. When you become complacent, you’re basically dead. You might as well move on and make room for someone else who’s a bit more exciting.

Richard Thompson will be performing a solo acoustic set at the House of Blues Parish on Sunday, April 30th. For more info, check out richardthompson-music.com