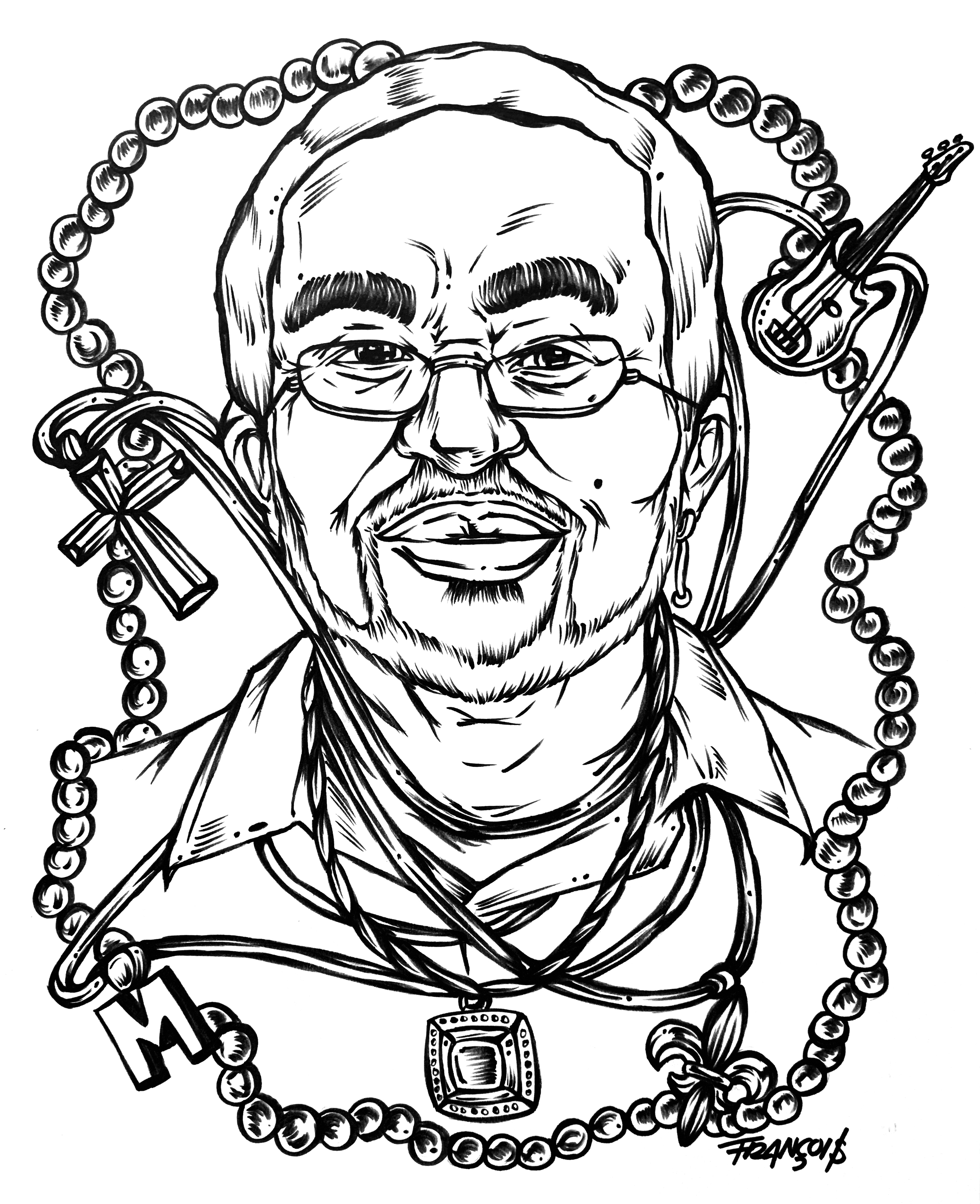 It is almost impossible to go through Mardi Gras season without hearing George Porter Jr. and for good reason. In the 1960s and ‘70s, the bassist’s thick funk grooves helped define The Meters and subsequently New Orleans as a whole. In addition to the records the seminal funk group released under that name, Porter and company also anchored classic recordings by local legends such as Dr. John, Allen Toussaint, and The Wild Tchoupitoulas. Porter’s vast array of recording credits stretches far beyond just names from within the city’s limits. A 1975 visit to Toussaint’s Sea-Saint Studios resulted in him performing percussion on Paul McCartney’s Mardi Gras tune, “My Carnival.”

This year, Porter’s Mardi Gras season comes after the late January release of Gettin’ Funkier All the Time (via SoulMusic Records), a box set compiling all eight of The Meters’ studio albums along with B-sides and other tracks. Extensive liner notes follow the band as members navigate their way through the music industry in hopes of finding widespread success. Although the group ultimately imploded in the late ‘70s, The Meters continued performing occasional reunion concerts up until keyboardist and singer Art Neville retired in 2018 and passed away last July.

Over four decades since the band’s initial demise, Porter continues to keep busy. The bassist teams up with Meters drummer Zigaboo Modeliste regularly to perform their former group’s tunes as Foundation of Funk. Fans continue flocking to the Maple Leaf Bar from all over the globe weekly to hear the bassist and his solo trio navigate loose jams with tight musicianship. This month, the 72-year-old interrupts a couple of those Monday slots for a short Japan tour as a member of Voodoo Dead and a lucrative Lundi Gras performance with Foundation of Funk at Orpheus’ annual bash.

When Porter returns to New Orleans from his Japan tour, he will add another title to his name: King Robustus XXXIV. On February 21, Krewe of Oak will crown the bassist during a special ceremony and parade. Taking a break from his vacation in Mexico to answer my questions, the soon-to-be Carnival royalty spoke about Mardi Gras season, his early impressions of Art Neville, and his advice for young musicians.

Yesterday you performed at Dead & Company’s event, Playing in the Sand. How are you enjoying the event and your time in Mexico?

Yesterday was excellent as far as music was concerned. I believe the band performed at its best, in spite of the technical problems of trying to sing into a microphone that the wind is blowing at 30 miles an hour. I’d say that we did very well and that we were very well received by the audience. My time in Mexico has been wonderful, sort of like paradise.

The Dead Head community appears to have adopted you as their own in recent years. How does that feel?

Very humbling at the fact that they have accepted me. There’s several different groups that I play in, performing the music that I’m known for: The Meters, my Runnin’ Pardners, and the Porter trio, Voodoo Dead. Groups that have performed some of the Dead music. I believe that they’ve been very warm and accepting. And I got a lot of t-shirts!

We’re approaching Mardi Gras season. You’ve recorded quite a few Mardi Gras staples. How does it feel hearing your music across New Orleans all month long?

Actually, we get to hear a great deal of our songs during Mardi Gras that weren’t really geared at being Mardi Gras songs. [They’re] great songs that just get played all year around in New Orleans. During the parades for those seven days, you hear them on the floats. You hear some of the school bands marching down the street playing some of those songs: “Hey Pocky A-Way,” “They All Ask’d For You,” and “Mardi Gras Mambo,” Art Neville’s classic. It’s kind of cool. I’m looking forward to this year, hear some more of it! [laughs]

Why do you think people come back to those songs every year?

‘Cause they’re good! [laughs] What else can you say? They’re great representations of that period of time. They’re good jump songs. You can bop to them, you can march to them, and you can party.

One of the many beloved tunes that The Meters recorded was “Mardi Gras Mambo.” You would’ve been around seven years old when Art recorded his first hit version with The Hawketts. What do you recall about hearing that tune as a kid?

As a kid, it was always the idea that when you heard “Mardi Gras Mambo,” it’d soon be here. Mardi Gras Day was on its way! As a small kid, we didn’t get to go to all of the earlier parades during the week. But that weekend before Mardi Gras, we got to enjoy some of those weekend parades because my daddy would be home and my mom would take us to St. Charles Avenue to go see the parades. Hearing “Mardi Gras Mambo,” “Big Chief,” and those songs as a kid was always wonderful.

What were your impressions of Art prior to working together in The Meters?

Art Neville? He was famous! [laughs] He was a famous New Orleans musician! Everybody knew the name Neville: Art Neville, Aaron Neville. It was like synonymous with Earl King and Fats Domino! When you heard those names, that was the successful part of New Orleans music that everybody, as kids, we heard. I was always thrilled! I loved Art Neville! Still do!

In 1975, you wound up playing percussion on Paul McCartney and Wings’ Mardi Gras song. How did that come about?

Paul and the group had recorded the track and they were doing a playback. Benny Spellman kind of said, “Man, the only thing that’s missing from this track is crowd noise and cowbells and screaming and stuff.” Paul said, “Wow! Let’s do that!” Benny came in the back and got us out of the back. It was probably Earl King, “Curly Moe,” Benny Spellman, Leo Nocentelli might’ve been there, [and] myself. We went into the studio. They set up two microphones and we played cowbells and tambourines and bottles and made noise and whistled and stuff like that. We moved from one microphone to the other microphone, from right to left. It was recorded that way to give the idea that the parade was moving from right to left. That’s the way that it went down.

What are your favorite Mardi Gras traditions?

In the early days when I was younger, we went around and caught the parades. Once I got past my 30s, we used to do Lundi Gras with the Runnin’ Pardners at Howlin’ Wolf. That was the night that Orpheus would run their parade. That became a tradition. I’m not sure exactly how many years we did it. We did it the year before Orpheus became a krewe and then we did it for several years. On Mardi Gras morning, we would check out of the hotel that was right around the corner from the club. Me and my wife would go walk over and watch my daughter because she marched in the Zulu parade. I think she was one of the girls that wore the straw dresses.

What is your least favorite thing about Mardi Gras?

I’m not sure that I have a least favorite thing about Mardi Gras. The only thing that I can think of is getting caught inside that box where the parade boxes you off from the outside world. If you’re in the middle of that box, you can’t move until it’s all over.

What tips do you have for surviving Mardi Gras season?

Stay at home! [laughs] Pace yourself, that’s all! It’s a long ten days and you can burn out. Then you won’t see Mardi Gras Day. Pace yourself!

You’ve held your Monday night gig at the Maple Leaf for years. What do you think keeps people coming back every week?

I’d like to hope that it is because the music is good. As well as that, we jam a lot. Although we may play some of the same songs every Monday, they’re never the same. It’s always open. On Monday nights lately, we’ve been having guests pop in on us, coming in and playing with us so it’s been fun. We keep the gig fun and interesting and musical.

In late January, a new Meters box set came out. The liner notes document the band’s hard attempts at finding success before ultimately falling apart. Has the world come to appropriately appreciate The Meters in the decades since then?

You would get four different answers if you asked each one of us individually. From where I sit, I believe that the music has spoken for itself. The fact that several of us are still able to perform the music and earn an income from the music means there’s still a pocket of success there. If you’re thinking that we have not gotten that award from the Grammys or the Rock & Roll Hall of Fame, I believe that those wins will be nice wins to have but I don’t think those wins are very much as profitable as actually selling records. With this new box set coming out, maybe it’s a chance for the world to get to hear The Meters in their entirety in one spot. 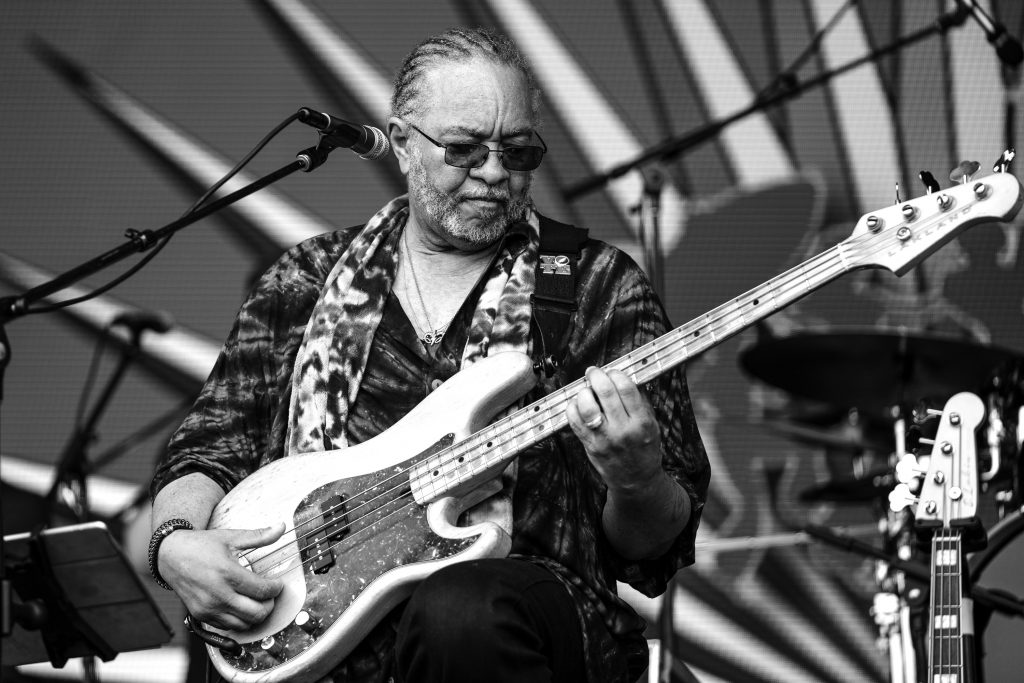 You continue to perform regularly with Zigaboo in Foundation of Funk. How does it feel to still be playing music with him over 50 years after you two first got together?

Playing with Zig is always unique because you absolutely have no idea where he’s coming from! He has such a unique pocket that it’s always interesting even though we’re playing songs that we’ve played off and on for 50-plus years. There’s still moments in all of those pieces of music that something new happens. It’s like Snooks Eaglin used to always tell me back in the days when I was a kid, [imitating Eaglin] “Now Porter, if you pay attention you might learn something!” I’m still paying attention.

Looking back at your career, what advice would you give to young musicians?

The first mistake I did in my life was wanting to be a musician so bad that I abandoned school to become that musician. When I look back at it, am I sorry that I did that to do what I do now? Sort of. I believe today that it is very important that everyone, musicians or otherwise… getting that education, getting at least a high school diploma will make a difference in your life. If you can go as far as you can go in the schools, go for it! As a musician… music is a business so learn the business because the more you know, the better you’re gonna be off. Don’t make the mistakes that we did back in the ‘60s, thinking that we’re having fun and enjoying this and, “Oh, we got records out and people love us!” While we were happy and smiling about our records being out, somebody was buying houses and cars and swimming pools while we were living in shacks. Get your education, learn the business of music, and—at the same time you’re learning the business of music—learn your instrument. It’s all important. One, two, three.

Is there anything else you want to say?

At 72-years-old, I’m still enjoying doing what I do. I still like climbing into a Transit van and driving halfway across the country with some friends to play music for other friends. I think that if you’re going to make this your business and make this your life, find some way to enjoy it and find the right people to share it with. I think I got that. 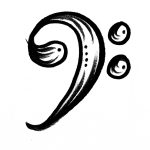 Thanks to Denise Sullivan for her assistance in conducting the interview.