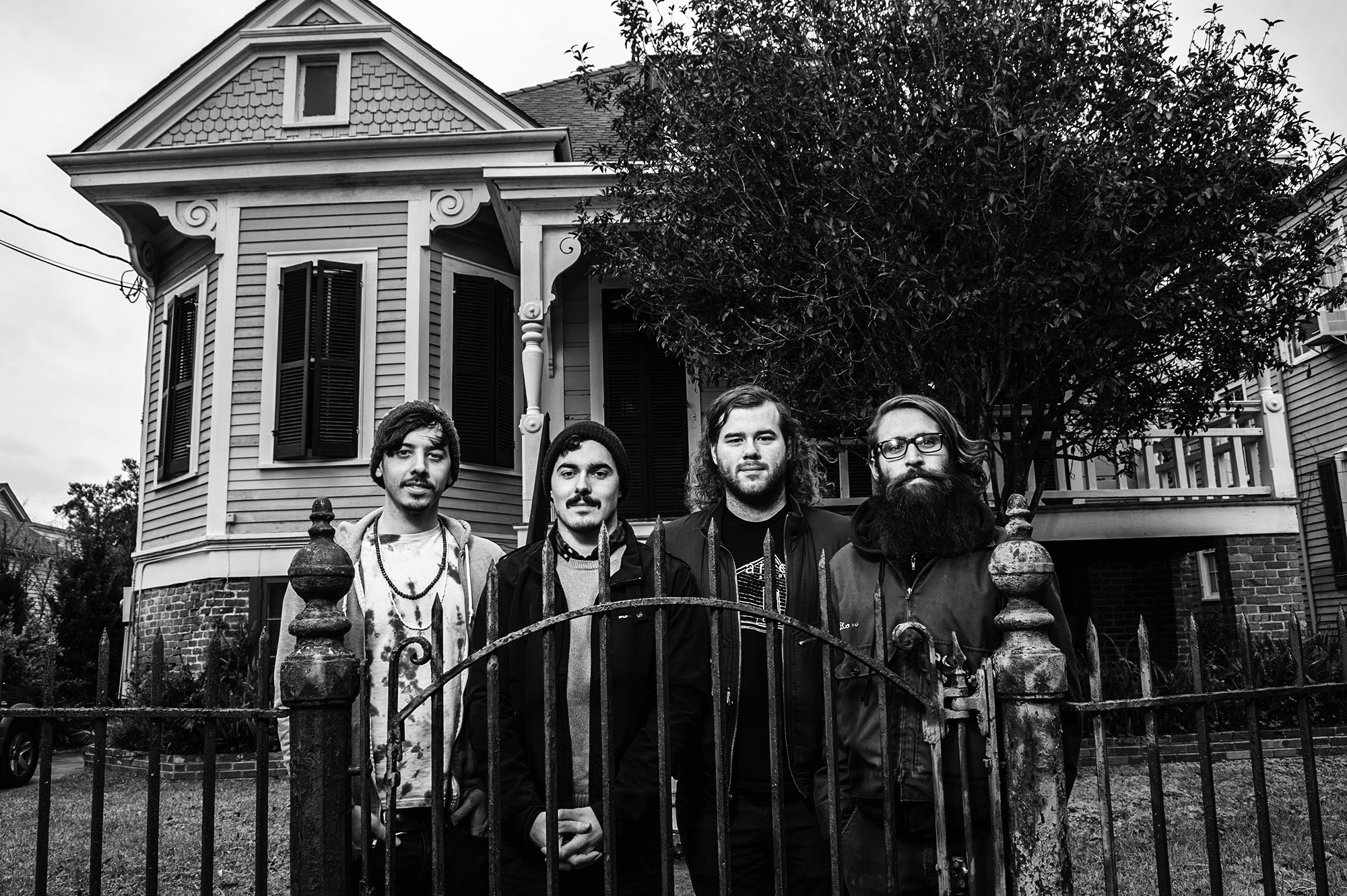 By Kevin Comarda May 2015
With a record label, a handful of musical side projects and several thousands of veggie oil-propelled tour miles under their belts, All People are making a hard case as some of the strongest workhorses in the New Orleans DIY scenes, and have ultimately become the flagship band for Community Records. Partnering again with Asian Man Records, the four-piece (Robert Landry, drums; Daniel Ray, keys, trombone, vocals; Greg Rodrigue, bass and vocals; Josh Campbell, guitar) is set to release their second full length album, Learn Forget Repeat, with eyes and ears already set on a third. I was lucky enough to track them down somewhere between Middletown, New York and the middle of nowhere to talk about the upcoming release and the current status of their most ambitious tour to date.

How’s the veggie van? Any major breakdowns or fix-ups or danger moments?

Robert Landry: Each tour, we get better and better at handling and understanding the van. None of us are mechanics but we don’t let mistakes happen more than once. With the veggie system, we always have to be alert and check to see whether or not oil is filtering smoothly, making sure we aren’t putting any more stress on the engine than we already do. Pulling a trailer full of equipment as well as an extra gas tank full of veggie oil makes the van work really hard. This tour, Greased Thunder has been optimizing at full force. We have only needed a couple motor oil changes, a fuel filter change, and a new trailer hitch. We also try to route our tours around mechanics that we trust to work on our vehicle. Joey at Full Circle Fuels in Oberlin, Ohio and Sam in Hudson, New York are two dudes that really help us facilitate the success of our tours. Both of them were responsible for converting our old van into the Powerstroke 7.3 liter Diesel Ford it actually is. Without them, we would probably be stranded.

How long is this tour? Is this the longest one yet?

RL: This is the longest tour that we’ve all been on. It’s roughly 7 weeks long. We have had a few stops back home, but they were barely 24 hours so we don’t count them. It started with our SXSW dates in Texas and is expanding until April 28th with our last show in Birmingham. In the middle of the tour we’ve made two loops within the Northeast and went as far as Springfield (Illinois). Our last week of touring will bring us back to New York and go as high as Boston.

Has it been good to you so far?

RL: It’s been a dream come true for the most part. All of us collectively have worked for years being in other touring bands, playing local shows, refining ourselves and our sound to make it to this point in our lives where we can be on the road as long as possible. The shows and the people are what make it all worth it, whether it’s a basement show in Brooklyn where people scream all the lyrics or a random house show in someone’s garage in New Jersey. We play to refuel ourselves and share one of the only things we are all passionate about. The best part of the road is seeing old friends and finding new ones. It’s crazy when just one person at a show in North Carolina says that they saw All People on a flier and decided to come see us because they have been to Block Party [Community’s annual fest] three times. Those moments make it worth it. Being gone for so long makes the connections to home rough, but none of us forget the undying support of family and girlfriends that make a lot of this possible.

Where are you guys right now?

RL: Tonight we are in Middletown. It’s one of the many farm towns that we have played and oddly enough, these random middle-of-nowhere places have produced the most supportive and rejuvenating shows of the entire tour. Our friend Gabe, from Tesla’s Revenge, has been close to the Community Records family for the past 8 years and has helped us with a few of our New York shows.

RL: The driving music is all over the place. I think we listen to NPR the most. D-Ray is the captain of Greased Thunder so he drives more than all of us, mostly because he’s the only one who can drive in reverse with the trailer. We love shows like This American Life, Wait Wait Don’t Tell Me, and our new favorite, Invisibilia. Greg’s go-tos are usually a dub tape from Domino Sound, or Beach House. Their record, Teen Dream, is the jam.

D-Ray: Yeah, honestly, if it isn’t NPR or classical music, I’ll go to one of the few records I have on my phone, which is usually Fugazi. This tour, there has been a lot of streaming random ‘90s songs on YouTube, which got pretty out of hand with the Nu-Metal.

Any big moments on this tour that will stick with you forever?

RL: My birthday landed on the day that we were playing NYC. It was pretty exciting. I got to eat my weight in bagels, get awesome pepperoni pizza from Vinnie’s, watch a baseball game in a neighborhood park, and play a rad show with our friends Safety. Some friends from New Orleans and other places also happened to be at the show too, so it was a very nice birthday present. The next day we got more bagels at Bagel World, which was my favorite: poppy seed bagel toasted with chive cream cheese and lox. Yum!

DR: Rob’s birthday in Brooklyn was the best! It felt like we all had a birthday that day. Another area that always sticks out in my mind is a place I’ve dubbed Uptown, New York. It’s a hybrid of Chester and Middletown, which are both upstate-ish. (Apparently, that’s a term that is debatable for New Yorkers.) Our shows in this area are always everything we could want in a tour date: no nonsense, donation-based house shows where people care about the music, bring food and make you feel like you’re right at home. It’s always the perfect mix of a rad show and also feels like a day of rest.

The new album feels a little different from your first album, Communicate. The recording is a little bigger and the music a little less genre-specific. Would you agree? Was that intentional or just a natural progression in the band’s direction?

RL: Personally, Communicate was the result of trying something different with music that I loved but didn’t want to pigeonhole myself into. Learn Forget Repeat was an even bigger representation of that and a more successful attempt. I was trying too hard to prove something with Communicate. When Zach Quinn joined All People it really revamped my energy for the band and we started writing music that we just really liked. I wanted the album to be even more different than Communicate—to express a different side of all of us and cover new ground. Learn Forget Repeat is the record I always wanted to make.

DR: I would agree with both of those statements. We absolutely spent more time on production with LFR, which was a lot of fun. On Communicate, I only played my Nord organ, trombone and single layered my vocals, but for LFR, because of the more developed nature of the songs, I expanded to utilize my ARP synthesizer, the awesome grand piano at The Living Room, as well as their vibraphone, and doubled most of my vocal tracks. This time around we had Zach, who was more attentive to what he wanted the guitars to sound like, so we ended up with some killer guitar tones.

Was there a different approach to songwriting/recording this album vs. Communicate?

RL: The thing about Learn Forget Repeat is that each song, with the exception of “Unfinished Book” and “Conversations,” was written by all of us. In a lot of ways the writing process was similar. We like to take trips to Greg’s parents’ house in rural Mississippi where we spend about a week focusing on songwriting and talking about what we want to accomplish with the album. “LITWOP” on Learn Forget Repeat stands for “lost in the woods on purpose,” which is our homage to that space. We spent weeks at our practice space fine-tuning the songs before going into The Living Room with Chris George and James Whitten—two people who have really been catalysts for our success and making our visions come true. I don’t think my drums have ever sounded better than on this record.

What’s next on the year’s agenda for All People?

RL: The next year’s schedule is pretty simple: we want to tour more at the end of the year after The Fest in Gainesville, write a new record, and tour on that. There is talk about more overseas touring, but the deal just hasn’t been in our favor quite yet. Step one is finishing this tour; there is still a week left. After that we start our next tour from May 20 to June 10 with our good friends and label mates, Pope. We want to focus on that being as beneficial as possible.

All People release Learn Forget Repeat on May 8th at One Eyed Jacks, with Ana Luna, Pope, The Melters, and Boyfriend Material opening. For more info, check out communityrecords.org