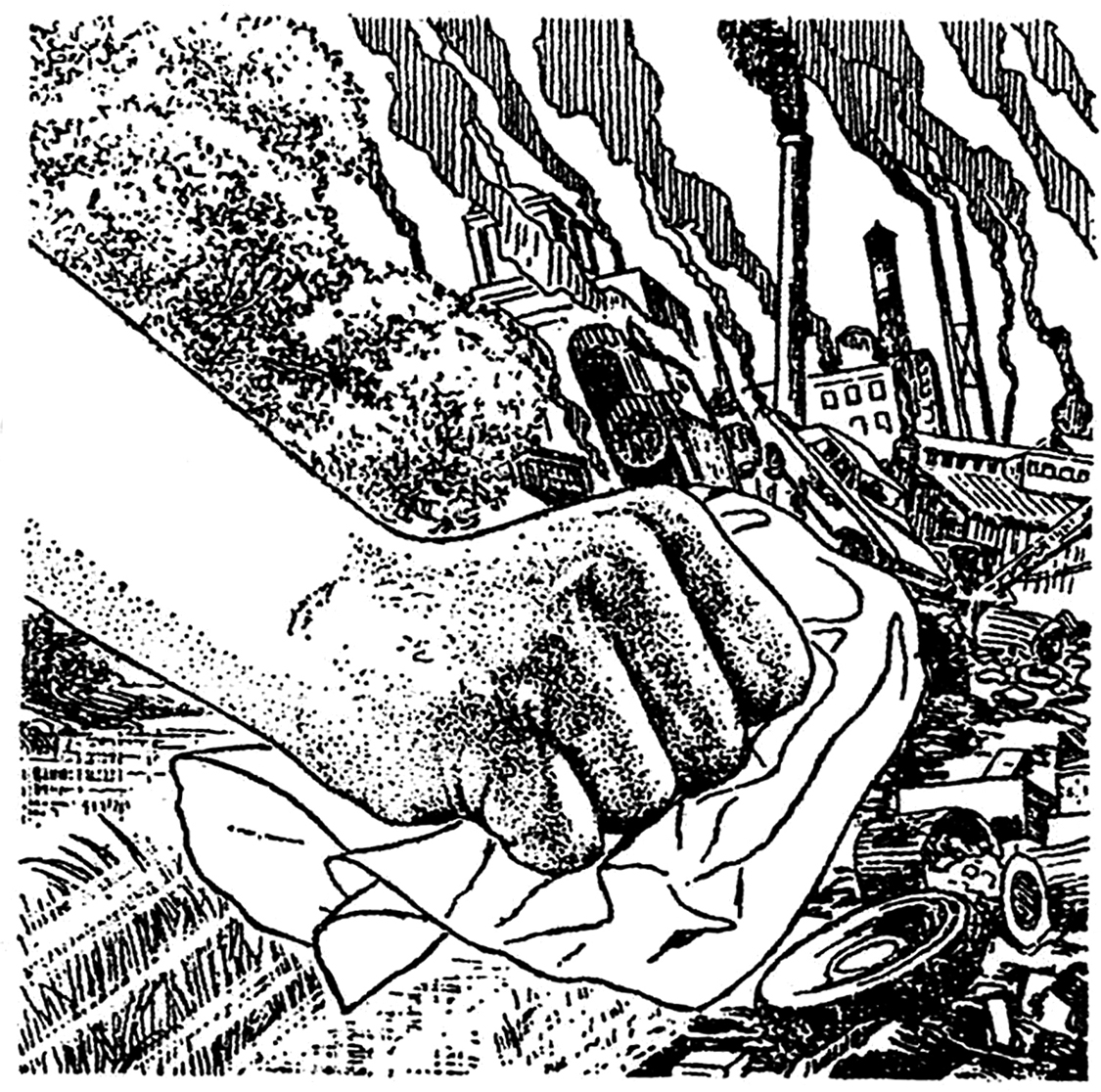 You gotta adapt to survive. Like a gator dug into a mud bank, I’ve slowed my psychic metabolism to a barely-there battery-saver mode. My social and sexual needs have dwindled to dust; I’m at peace. To think of it all resuming makes me sick. After being idled for so long, I can’t imagine clambering back aboard the flesh-shredding carousel of modern existence. Nothing could be more distressing than seeing that gilded hamster wheel beginning spinning again and hearing its music, lately slowed to a dolorous, subterranean groan, rise to the frenetic, panic-attack previous pace.

But this is precisely what the “reopeners” want: the hellworld exploding back into gaudy florescence, the treadmills and assembly-line conveyor belts resuming their algorithmically optimized acceleration. Choking to death on my blood sounds preferable; the hollow, harried mania of productivity we were duped into calling “life” was always just death in disguise.

I’d be inconsolable if I thought it was going to happen.

Work is legal murder to begin with, but going back to work now might kill you quicker than usual. When you take into account our history and the disproportionate virus-related death rates of Black New Orleanians, Mayor Cantrell’s event cancellations and refusal to fire back up our touristic culture-extraction industry is unmistakably heroic. She is defending Black lives.

A rogue’s gallery of Comus types took out a full-page Times-Pic newspaper ad demanding low-wage workers be put back to work—risks be damned—for the profits of the overseer class. I don’t think the mayor was moved. It’s been delightful to see her cranky autocratic streak serving the public good for a change. She is (for now) holding her ground against the very same wealthy exploiters who have so profitably relied on, used up, and destroyed our city’s Black people and Black culture and Black labor for centuries.

When the Jefferson Parish Chamber of Commerce’s president penned an open letter attacking her for daring to speak on New Orleans’ future without consulting the suburbs first, Cantrell let them know they had no place in the conversation.

Our state’s slave-catcher demographic was apoplectic at her temerity. The alt-right Hayride website, which has reacted to the pandemic with a wave of flat-earther science-denial, now speaks of Cantrell’s “War on Jefferson Parish.” They’re incensed that she’s chosen to preserve Black lives by turning off our city’s money faucet. Her doing so has forced these white-flight parasites to face the truth that New Orleans, their favorite punching bag, remains the region’s economic driver.

What a bitter pill for those vanilla villains: the Chocolate City that the rest of the state’s white-power structure anathemizes actually holds the reins.

You’d still be a sucker to count on the mayor or any other politician in times of need, but the bare fact of Louisiana’s economic reliance on the labor of New Orleans’ underclass is an example of how this crisis has revealed who the “producers” really are—and where the real power resides.

All calls to reopen are about profit. They reveal what values those making them place on others’ lives. For example, even as the death toll in Mexico continues to mount, the United States “Defense undersecretary for acquisition and sustainment” is pressuring the Mexican government to reopen the factories that manufacture U.S. armaments.

Domestically, we have these astroturfed reopen rallies. I like them. I like seeing all the “reopen” people angry and upset, deprived of the labor of the working poor. I also know those sorts of sign-waving spectacles accomplish nothing. Unless they serve as cover for something more conflictual, which they seldom do, they’re a demoralizing waste of time and energy. As tactics go, there’s none I’d more readily relinquish.

I am sympathetic to those who refuse to wear a mask and refuse to obey the martial law of quarantine. I’d be lying if I said I didn’t feel the same way. The problem is that your intent doesn’t matter: by showing up at one of these gatherings, you just add to the headcount and reinforce the agenda of the organizers. The people behind them—who Jeff Bezos’ Washington Post finally got around to identifying as “a network of right-leaning individuals and groups… amplified, and in some cases coordinated, by longtime conservative activists… with help from Republican megadonors,”—only care about trying to resume business as usual. If you come to their event, you’re part of their show.

Before the pandemic, the landlords and small-business owners at these rallies were standing on our necks and draining us dry. Now they’re out in public making fools of themselves instead, demanding the sun set back in the East, demanding the virus be revealed as a hoax, demanding a return to the “normalcy” in which these nebbishes had just enough power over the rest of us that they could kid themselves they were winners.

The historian Sean Benjamin cautions that past fascist movements have arisen from precisely this dynamic: an alliance between the capitalist class and the petit bourgeoisie, encouraged by the State and a compliant mass media. That context does make it disconcerting to see, for example, the cops in Raleigh, North Carolina letting protesters use a police cruiser’s loudspeaker. It’s an ominous synergy.

The Salish Sea Black Autonomists collective writes in the intro to their very good zine, To Reach Out and Touch One Another, “[H]ealth and pandemic have mutated into one sinister, paternalistic technique of governance that has managed to absorb the social body into the nation and the economy. What’s healthy for the nation, what’s healthy for the economy, is healthy for us because we are them. With this one trick the social body has become a weapon wielded against itself.”

That’s certainly the logic of these reopeners and their enablers in the media, but to me these little protests and parades look more like funerals for a dead reality. I’m not saying what comes next will be nice, but I don’t think we’re in any danger of going “back to normal.”

Unemployment’s over 20%. That’s the kind of statistic we saw a decade ago in countries where the Arab Spring took hold. Mass unemployment promises big structural change of one kind or another.

In Georgia, the governor announced a partial reopening, deaths be damned. As the writer George Chidi observed in a must-read opinion piece titled “Governor’s decision to reopen businesses is political murder,” the urgency driving this reopening was to make Georgia’s poor ineligible for unemployment benefits.

Chidi says, “A hairdresser or a massage therapist cannot maintain social distance… It is no coincidence that the businesses on this list are staffed by relatively poor people. Because that’s who he wants off the unemployment rolls. And if they die… well, they’re mostly black people, or Asian, and poor, and an acceptable political loss…”

It’s a cynical gamble the Georgia governor made, but it was also a desperate one, and it may not break his way. Daddy Trump has disavowed him, and the planned reopening is already in disarray.

When the mayor of Las Vegas went on TV to announce the city would reopen for tourism, unions vowed to defy her. The bosses are used to setting the terms for us workers—but the virus won’t listen to them. Workers may not be listening as much either.

Mass unemployment, the number-one predictor of social unrest, has arrived. It’s just starting to settle in. What are we going to do about it?

A third of American tenants didn’t pay rent in April, and that number will be higher in May. That’s fresh and new. That’s a big deal. We are in the middle of the largest wave of prisoner actions in decades. That’s a big deal. Instacart delivery and Amazon warehouse workers are staging walkouts. Free at last from their electoral albatross, the DSA is launching a national worker-organizing campaign.

I know you’re probably depressed and demoralized. I am too; I had other plans for this year. It’s a grim state of affairs. But wringing our hands over the horrors of this pandemic won’t build power. Feeling bad about it won’t fix anything. We seize opportunities or we cede them. We join with others to shape what comes next, or we leave it in the hands of those who value profits above human life.

This is the historic moment. Now, while business as usual is impossible. Now, while the liberals are busy trying to shock life back into their rotting corpse of a candidate. Now, while the vast majority is pushed into crisis and the worthless media is up its own ass in an infinite cycle of moralizing reaction around the irrelevant theater of the presidency. Now, while the landlords are crying, while the stock market is cratering.

It’s been an informative quarantine. The architects of the old order have told us very clearly what would best serve their interests: they want us back to work. They want us to pay our student loans and credit card bills and mortgages and rent. They know a storm is brewing. They’re afraid.

We’ve learned how badly the machine needs us. It runs on our bodies, it requires our participation, and all it took to derail the chugging one-percenter pain train was staying home for a while. This inglorious, stale-fart couchlife the virus has enforced wasn’t the General Strike anyone planned, but apparently it’s effective.

It’s extraordinary what power we have when we all act together. When we all stop showing up at our terrible, deadly jobs, when we all stop paying rent, it seems the vampires who’ve been relying on our obedience have no recourse.

Could it be that all along, all we had to do was stop?