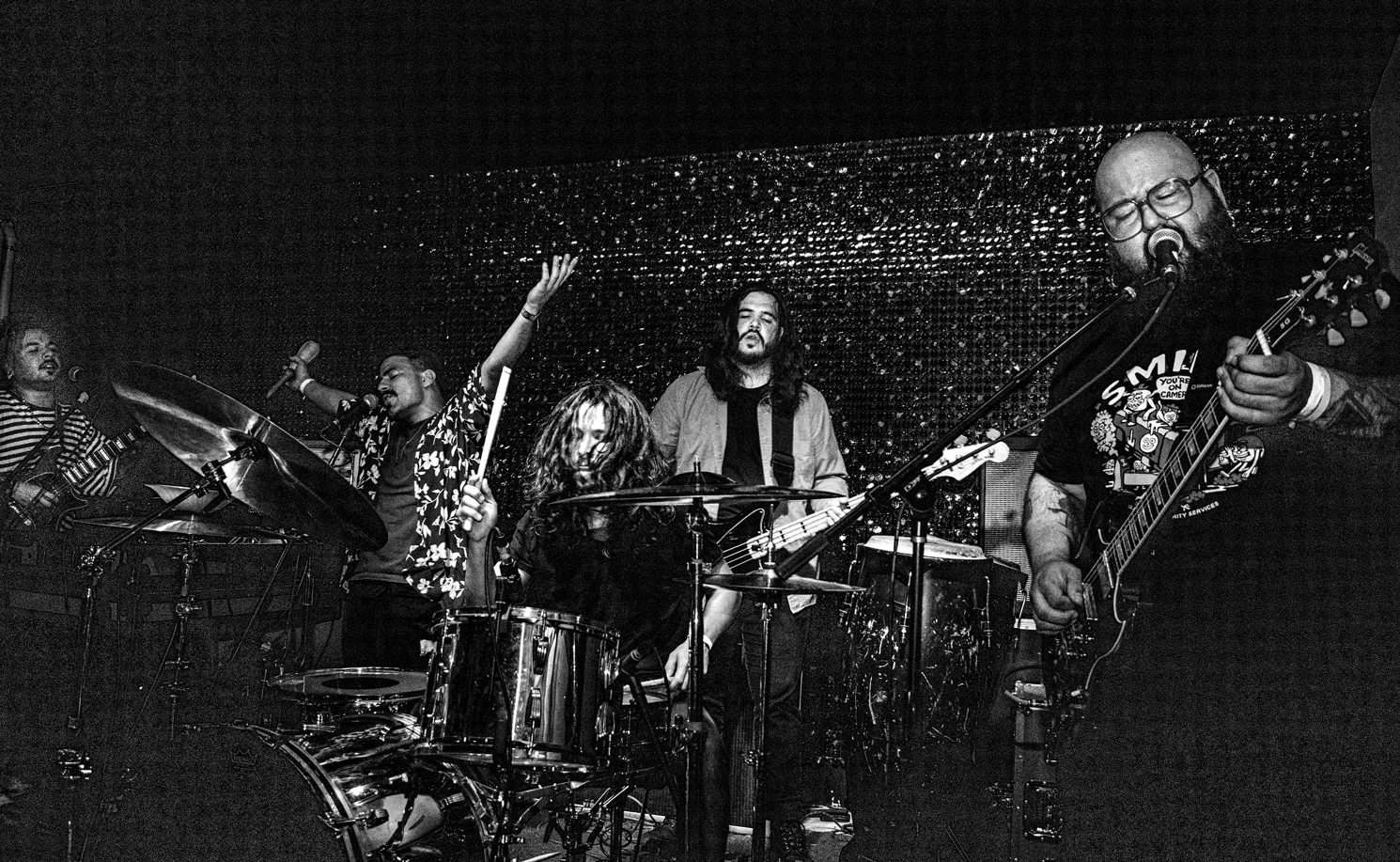 By Dalton Spangler May 2022

Exactly nine weeks after Holy Thursday, Venezuelan Catholics don the mask of the dancing devil, Yare. Symbolizing evil, the mask of Yare is worn by promeseros (promise-keepers) who dance to cast away themselves from the village of Yare. It’s one part a battle between good and evil but is another part accepting evil as a means to do good. Zeta embraces the devil as part of their identity both culturally and musically. As they played at Gasa Gasa on Good Friday, I realized they dance not only in celebration but in sadness, anger, and especially in fatigue.

Zeta was on the last leg of their 36-date tour spanning from Washington state to their home base of south Florida. Eleven days prior, their van had been broken into while they were in Oakland. Around $10,000 worth of gear and sensitive items, including passports and green cards, were taken. I could tell they were tired. Before the set, I saw them doing finger stretches, visibly cringing at the tension. I have seen them play four times before, twice at a DIY house in south Georgia and another two times at Fest in Gainesville, Florida.

They’re deeply connected with DIY/punk circuits around the country, practically living in their van most of the year. Growing up in Venezuela, they started the band in high school as the weird outsider kids who liked punk music. Through websites like MySpace and also word of mouth, they began touring much of Latin America. Inspired by North American bands they saw live like Comeback Kid, Zeta set out to bring their version of post-hardcore stateside. Around 2015, the band was granted visas to play in the U.S. Some of the members have even attained citizenship, despite great hardship doing so.

Described as an angrier Latin Pink Floyd or Afro-Caribbean percussive punk, Zeta’s arrangement on stage isn’t like your ordinary band. The five members are locked into their spots surrounded by percussion. The drum kit takes front and center stage where Eduardo “Chino” Sandoval performs like Animal from the Muppets. Behind him is multi-instrumentalist Alex Musanostra and bassist Antonio Pereira. Stage left, vocalist Juan Ricardo Yilo (a.k.a. Juan Chi) is locked in by his set of bongos while also strapped with a red Fender guitar. Stage right, Dani Eduardo performs everything from drums to keys to bizarre pedals and even guitar. Despite the rigidness of the stage layout, the band is pure energy, moving gracefully and occasionally violently in their crowded space.

During some of their major shows, especially in Florida, they will have guest dancers who wear the mask of Yare. They’ve formed dedicated communities all around the country, taking on musicians as they go. Their Instagram handle, @joinzeta, explains all you need to know about the mission of the band. They aim to convert: dancing devils seeking more dancing devils.

It was a small audience at Gasa Gasa but an intimate one. Some sat and nodded along while others grooved with the band. Zeta brought a force not unlike a storm, wandering peacefully like a jam band before exploding with lighting and thunder. Juan Chi broke a string at one point but the band was able to improvise a melancholic interlude without missing a beat while he repaired his guitar. Juan Chi then joined with instantly recognizable chords of their song “Resignar.” Singing in a whisper, with hushed bongos tapping along to the guitar line, the chorus exploded with a full drum kit and screaming vocals that were subdued as quickly as they ignited.

Before the show, Juan Chi told me about salsa music and its importance in South American countries. He said that it’s dance music but that it is often very political lyrically. Highly influenced by Latin and Afro-Caribbean music, Zeta connects the world of Latin music to another politically bent and danceable genre, punk.

Catharsis is a word thrown around when describing the appeal of moshing and screaming your head off along with a band. It doesn’t matter who you are or whatever is going on in your life, the pit is where you let go of all those things and dance. In Latin cultures, dancing is supposed to be multifaceted like that. It’s what Zeta brings to every show: dance and fellowship. The title of their new album, Todo Bailarlo, translates to “Dance It All,” a creed the band has naturally developed.

During the show, they paused for a moment to check in with the audience, asking if they wanted more. To a predictable reply, they launched into “Magia Infinita,” a percussion-heavy song. Some of the members strained as their wrists tightened and inflamed while crashing on the drums. They were relentless as the crowd cheered to their crescendoing beat. The whole band picked up shakers, drums, bongos and more as they created a sound like something straight out of Congo Square. We danced as devils as Good Friday ended and a new day began.

photo by the author