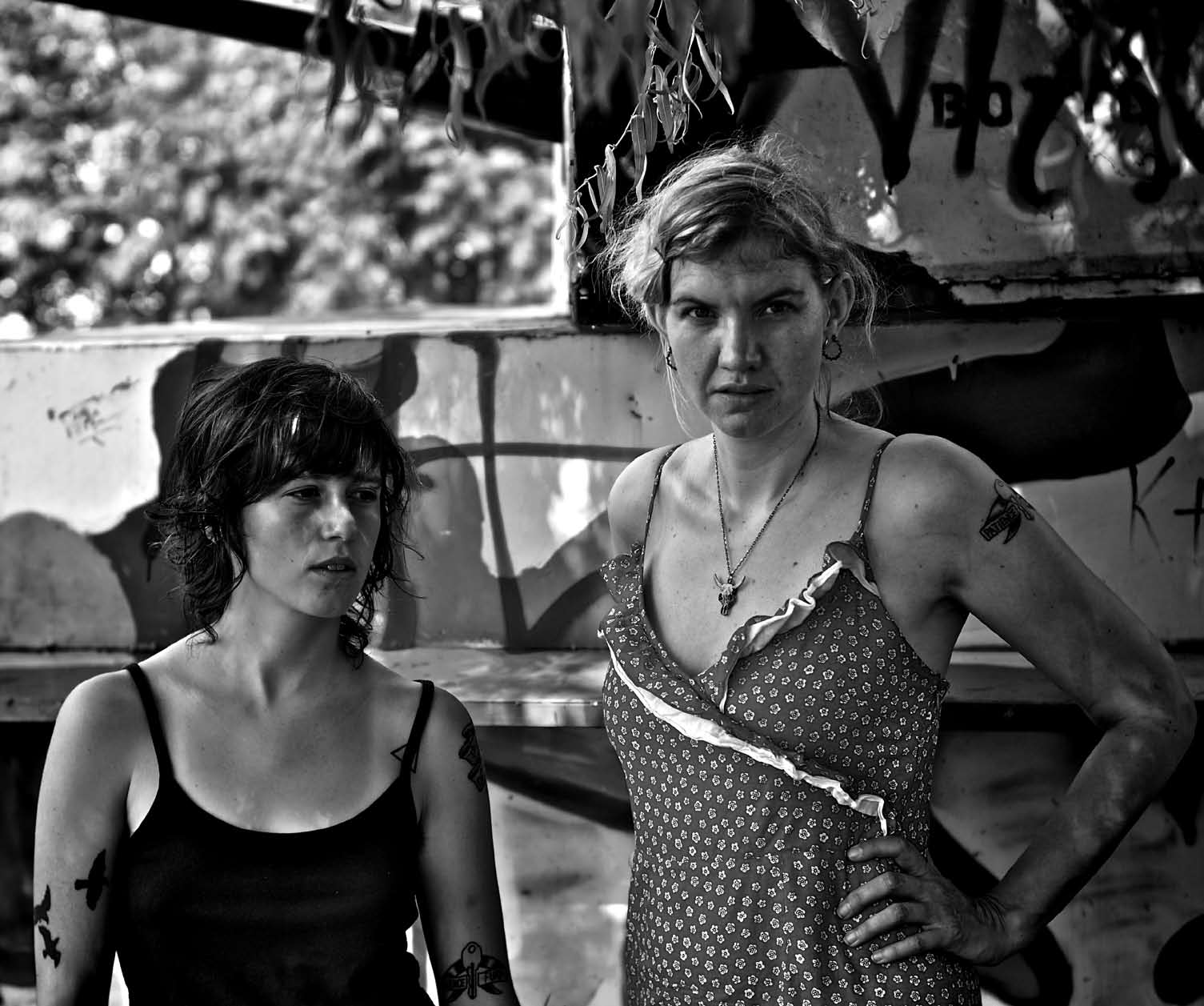 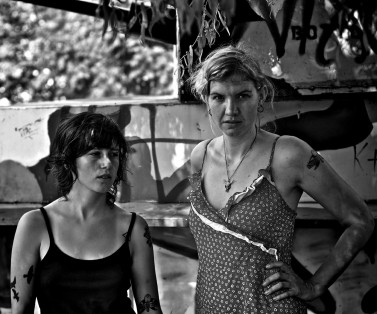 Trophy Wife are a two-piece punk band from Philadelphia. They play angular, passionate songs inspired by topics as far flung as their friendship, the poetry of Audre Lorde, and water politics. Diane Foglizzo plays guitar, Katy Otto plays drums, and they both sing. The ladies of TW are lifer punk stalwarts, who have been organizing, booking shows, and playing music in the scene since the late ‘90s. The two are active outside of their band in projects such as the prison abolitionist group Decarcerate PA and Girls Rock! PA. Rachel Speck, an organizer of Girls Rock! NOLA and Not Enough Fest, chatted with Katy and Diane about music, punk community, and being a lady in rock, in advance of their New Orleans show this month. — Beck Levy

What got you into punk?

Diane Foglizzo: For me it was being 19 in Washington, DC, during the Iraq war in 2003, and living there for seven years afterwards.

Katy Otto: I think for me it was a slippery slope from Nirvana and Sleater-Kinney to Fugazi and Bikini Kill, first through glossy magazines,  then through DIY concerts and zines. Also in Washington, DC.

Did you both start playing music  together in DC?

KO: Yes, Diane and I were actually working together with Beck and our friend Fil on a zine Give Me Back.

What was the subject matter of Give Me Back?

DF: It was a punk music zine started by folks who had worked on HeartattaCk in California.

KO: Yeah. [Senior Editor] Fil was a good photographer, too; so there were some neat photos he took in there, and we all submitted other music reviews and articles and content. It’s defunct now. But it served to bring Trophy Wife together in some way! 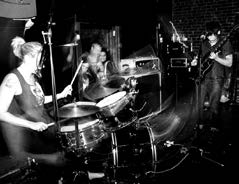 It is funny how printing projects like that lead up to musical projects. Scissorgrind, a band that I was in, started with three of us working at a print shop together and playing  a benefit cover show for the shop.  Both of you mentioned that DC influenced your entry into punk. What is it about DC?

KO: I was raised just outside of DC in Prince George’s County, Maryland. I loved music from an early age—but music that is indigenous to DC, namely  punk and go-go, has a really important place in my heart. And growing up as a teen in DC punk, I could see the melding of social justice movements and work with art. It was a really inspiring community.

DF: I also was always really into music—going to concerts and copying down lyrics to my favorite songs so I could memorize them. I learned piano at a young age but never really went anywhere with it. Being in DC and going to punk shows created a totally different experience with music: small shows, feeling less alienated, less money involved. And for me being in DC, it was totally tied up with political organizing which made it feel like something deeper and bigger. Something about the politics, politicians and policies in the city made it feel absolutely crucial that punk music existed. And I’m sure that could be said about a lot of places, too. I guess it’s also just where I happened to be at a time when I needed to feel a part of something. Pushing away from ways of being that I was taught or expected to maintain… 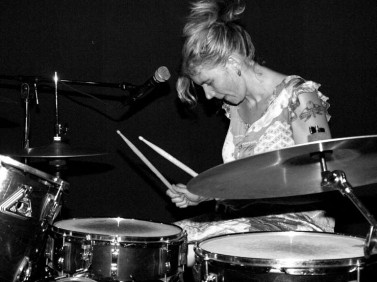 Is Trophy Wife your first band?

KO: It’s not my first but it’s my longest- running and most accomplished!

DF: I had a funny, weird band I was in for like a month beforehand, but otherwise it is my first and pretty much only band.

KO: I played in a band, Bald Rapunzel, and a band, Del Cielo, for long stretches, and a few other shorter-term projects. But Trophy Wife is the only band I ever got a tattoo for!

I love the name Bald Rapunzel! How long has Trophy Wife been around for? Also, you both have moved to Philadelphia now?

DF: Katy and I moved in separate directions in 2010, still in our band, and then reunited again when I moved to Philly a year later, where she was living.

KO: I was psyched to be in the same city as Diane again.

DF: I grew up in Philly and was working from afar for an organization in Philly, so with Katy being there in addition, it made a lot of sense for me to go back.

KO: It’s a pretty fantastic place in many ways.

That is really awesome. Six years  is a really long time,  especially for punk bands! Do you have any advice  for the bands that are struggling to make it past the one year mark?

DF: Allowing for a lot of flexibility for where each person in the band is at emotionally, physically, and mentally. Which might mean taking a break for six months or sometimes carrying all the gear.

DF: Which then requires a lot of processing and communication. Haha, that obviously connects to Katy’s comment.

KO: I think it’s also pretty critical to have goals that aren’t about what other  people or the outside world thinks of what you are doing. Internal goals and dreams. I like the Cobain quote: “Our little group has always been / and always will until the end.” Ha ha.

DF: [A band] is a relationship and needs  work and love and time and also for me (like any relationship), it isn’t the one and only thing that can provide me with everything I need. Having to create  boundaries and continuing to build your other relationships (musically or not) is important!

KO: I want to share one funny story that Diane hasn’t even heard yet. We used to be roommates. While at my mom’s holiday party recently someone asked where I was living. I said I’d moved in with my partner in South Philly, and they asked “Ahhh but you and Diane are still together, yes?” And I grinned and said, “Yep, totally!” I guess that felt like a relevant story. I like when people know our connection is a priority to me. DF: Ha ha ha, Katy!

KO: I wondered what the other people at the party must have thought! 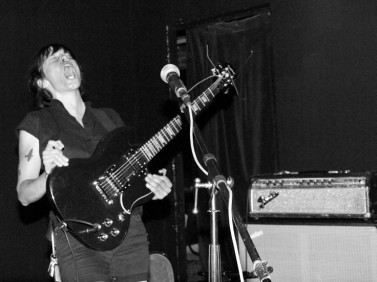 With starting your band in DC and then with moving to Philly, how would you compare your experiences and support systems in the two cities?

DF: I think a lot of bands and musicians in DC are doing rad things and totally  making it work. But I think Philly offers Katy and me an indescribable and intangible space that we couldn’t really access in DC. I feel like I can be weirder in Philly and a bit more in touch with myself.

KO: The DC of my teens and 20s also isn’t really there anymore. I needed  to leave even though I loved that city because I wanted to try new things, to stretch. In Philly, there is a great creative community—and some of what we draw strength from extends beyond a strictly punk world.

What are some of the other  communities that you feel you draw strength from? Or other projects?

KO: Creative communities beyond music, like dance, theater, visual art. Youth organizing and organizers as well. Diane is also the program director of Girls Rock! Philly and there is so much inspiring community that comes from that organization.

DF: Totally! Thanks for saying that,  Katy. I was thinking about that for sure. Also, Katy is involved in a lot of different great work currently around reproductive justice. Her mind is capable of thinking about eight million things at the same time so I am always learning about something new from her.

KO: That can be a good thing and a bad thing, but it is probably why I am a drummer!

We are starting a Girls Rock! camp here. We are hoping to have our first  camp this summer. It’s one of a few recent efforts to support women in punk here. Last year, we began an annual fest called Not Enough Fest, to nurture and showcase new lady and queer bands in New Orleans.  It met with a lot of support but also some misunderstanding and contention. As two people who invest a lot of energy in not just your band but political projects, what are some criticisms that you have faced? What did you do to acknowledge and overcome those criticisms?

KO: I think we’ve been lucky to get a lot of support for our band, but criticism can also come from inside you and I think this happens a lot for people socialized female in this world. I think there is healthy critique and self-assessment, and there is unhealthy self-criticism. In our organizing I think  it is somewhat different. I think there is more blatant, structural opposition and criticism to what we both do there.

DF: In addition to all of what Katy said (which I agree with) is the idea that  music (or my music specifically) is not a valuable form of cultural creation or political protest. But in fact it is; I know that deeply. But that doesn’t mean I don’t fall down that hole sometimes. KO: All that being said, there is subtle criticism—like not being taken as seriously as other bands, or even little  things like not being communicated with about order of a show, that kind of thing. Sometimes these are “micro-deductions” I think. And I agree with Diane. It’s hard to not internalize these things.

KO: That’s part of why forming community, particularly with other  women and queer-identified musicians and artists, feels critical.

I agree with that, too. It is a weird  balancing act, in New Orleans or maybe everywhere? It is critical to make those bonds. However, it is important to not remove yourself or your bond from the bigger community or exclude the people that support you.

KO: I think we’ve also benefitted as a band by occupying different kinds of spaces. Metal, heavy music spaces, queer/feminist punk spaces. Music should let you travel! And we look forward to traveling your way soon.

Trophy Wife plays at Red House on January 14th with Mourning Cloak and Mystic Inane. Check out trophywifetheband.blogspot.com and noladiy.org for more info.