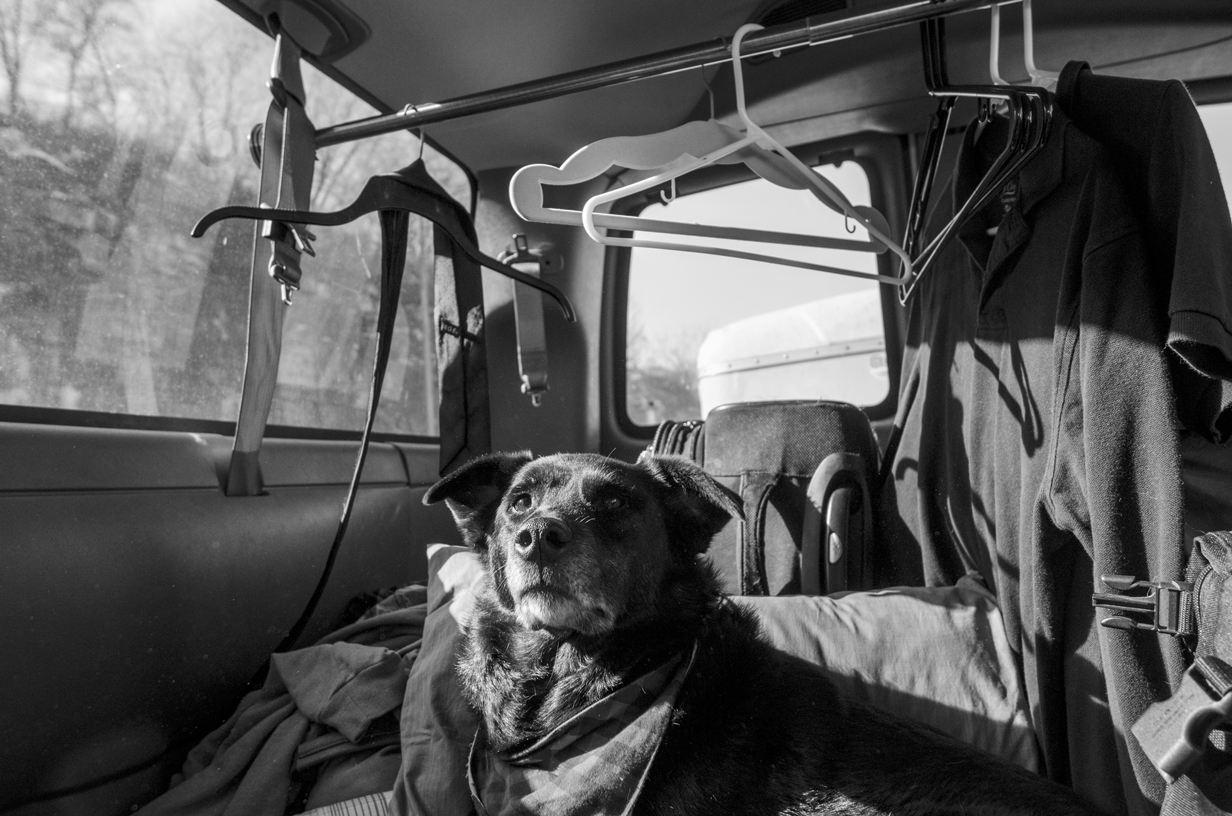 I’ve had the privilege of working with Stoop Kids as their photographer for over three years now, following a fateful photo shoot at the Maple Leaf in the fall of 2014. Self described as genre-bending chaos pop, I have watched them grow from college seniors to true starving artists like the rest of us. I remember the first time they played Tipitina’s and the first time they brought me on the road. I gained trusted colleagues and, later, friends and brothers.

About this time last year, Stoop Kids moved themselves as a band from New Orleans to Nashville, and our time together became quite limited. This past December, as I was sucked into my daily Instagram rabbit hole, I did a double take at the dates for a January run the boys had planned with Little Stranger (a Charleston-based hip-hop duo), and realized I had nothing booked. I put in a call to the saxophonist and de facto band dad Thomas Eisenhood and invited myself along, reprising my previous role of band photog, as well as picking up a new title: tour manager. Here’s what happened. 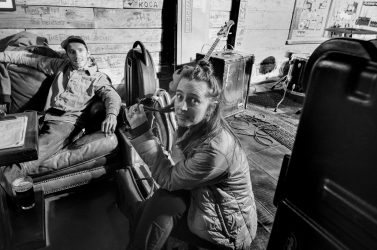 In the year since they moved to Nashville, the boys have been back and forth to New Orleans many times and in many combinations, so their absence hasn’t been a complete shock to the system. Dave Paternostro (keys, guitar, percussion) still has his entire family here, so he was the last to return to Nashville before the tour, hitching a ride up with me the day before we all hit the road. This also happened to be the day of the great Louisiana deep freeze of 2018, so we ended up driving on some seriously swampy backroads to get ourselves far enough north that we could get on the highway. Eight hours and way too much granola later, we stumbled into the apartment he shares with drummer Joe Tontillo.

I woke up on the couch and immediately made the first of many cups of coffee that would be consumed on tour. Caffeine makes me bounce off the walls ever so slightly, so when I am home, I keep it contained to three cups a week. But my brain on tour is akin to a 14-year-old when their parents are out of town. The day before Dave and I drove up from New Orleans, Sam Fruend (bassist) and Tom drove to St. Louis in Dave’s car to pick up Tom’s sax from getting repaired. Thus, that morning as we packed ourselves up for the first leg of the tour, Sam brought Dave’s car back to him and the four of us drove up the street to a classic rock-themed diner called the Pied Piper while we waited for Tom, lead singer Griffin Dean, and band dog Maggie to come pick us all up in the van. And like most bands on the first morning of a tour, they were late. In Tom’s defense, he was sick and dying from this season’s outrageous flu. In Griffin’s defense, he assumed Joe was going to come over and wake him up. We drove to Athens, Georgia where we met Little Stranger, who would be touring with us until the following weekend. A local band called Trash Panda opened the show, my boys played their set, and the Little Stranger duo closed the show. The frigid temperatures made load-out hell, and then we drove an hour to Atlanta to crash at the home of Stoop Kids manager’s parents.

The second show of the run was at the Vinyl Theatre in Atlanta, so we all got to experience our different versions of “sleeping in” the next morning, although Griffin did scold me for thinking that 10 a.m. counts as sleeping in. It only took one leg of the journey in the van for the rest of us to start feeling some sort of flu-like symptoms, and we began concocting plans over the breakfast table to get our hands on whatever Z-packs we could find before heading to sound check. After almost crashing the van (no tour is complete without some sort of traffic-related tale), Griffin bonded with Kevin and John of Little Stranger over being from Philly, and the rest of us learned that a “Philly handshake” is no different from any other handshake. Griffin has a few songs during which he joins the audience and gets people to breakdance with him, but he finally met his match at this show when an unsuspecting boy named Max came out of nowhere with a backflip in the middle of the circle. I also farted in the green room and the boys let every new person who entered the room know it. Worth it.

“I grew up an only child and always told my mom that I wanted a brother; now I have five.”

The sickness raged on in all of us as the boys discussed the previous night’s show. Someone always says that a bit went too long or too far; and someone else always responds by saying that making fun of themselves and everyone else is the schtick. When we finally got ourselves all packed up and came to terms with the fact that we would no longer be in the comfort of a real home with beds and showers, we climbed in the van where we unknowingly submitted ourselves to a three-hour-long conversation between Dave and Griffin about the physics of sound. Tom piped up to tell us that “there’s a ton of philosophy” on the topic, but stopped short of actually letting us know what it was. We rolled into Birmingham with just enough time to pick up a Z-pack for Sam (the only successful schemer amongst us apparently) and still beat the sound guy to the Syndicate Lounge, by far the weirdest venue of the run. On the second floor of what one might otherwise assume is an abandoned building, we loaded in up a flight of stairs in the alley while watching an extremely bizarre cast of characters—including a man in a floor-length black leather trench coat, a three-year old in pajamas, and a sound man who could not stop telling us how much he hated the sound board—come and go from the venue. But the audience was a good one, which is one of the hardest things to guarantee. Griffin aggravated an existing foot injury when he slipped on water during his dance break, and John and I watched a couple make out vigorously against a wall. The time finally came to pack up our sick and dying and drive back to Nashville for two days off.

Football essentially consumed the entirety of our first day off. The three Philadelphians were very happy boys following the Eagles’ trouncing of the Vikings. Dave and I took the second day to shockingly and successfully make our own gnocchi from extra potatoes I had brought with me (I’m Polish, potatoes are a thing) for dinner where we got to meet Joe’s new girlfriend. She’s a gem. Don’t fuck this up, Joe!

Friends don’t let friends go to Tupelo on Tuesday nights. Tupelo should be reserved for references in country songs, that’s it. The bill got booked for a Tuesday night show at a bar-restaurant called the Blue Canoe. Once the futility of it all settled in, the show became a bit of a free-for-all for both bands—especially since we were four shows deep together and things were beginning to get WEIRD. Sam didn’t stick a landing and fell backwards off the stage, plus Dave and I had been visited by Jehovah’s Witnesses that morning and Tom found a religious pamphlet in a gas station bathroom inquiring about our relationship with Jesus. After a freestyle session (that’s what the kids call it these days, right?) in the parking lot of the venue, both bands got hotel rooms at the Quality Inn down the street where the freestyling (plus many Miller Lites) continued.

Dave, Tom, and I woke up early in order to actually make it to the free breakfast at the hotel and it was disappointing. We did have a very solid heart-to-heart about life and love, though. As we were leaving the lobby, some hotel staff informed us that the water would be shut off for construction purposes (another thumbs up for Tupelo) so we hurried back to brush our teeth and get the other Stoops up from their slumbers. After a second breakfast at the one-and-only Cracker Barrel and an hour-long drive, we found ourselves in the college town of Oxford, Mississippi and, more specifically, inside the nearest record store, End Of All Music. Griffin and I hauled away a ton of vinyl from the FREE RECORD box outside the front door and Dave and I took advantage of Waffle Cone Wednesday at the local candy store. The show at Proud Larry’s would’ve been cooler if there had actually been humans there (but as we all know, when it’s colder than 50 degrees anywhere below the Mason-Dixon line, the masses go into full apocalypse mode); and the green room would’ve been cooler if it hadn’t been in the back of the root cellar.

We arrived back in Nashville around 4:30 in the morning, tired and frozen. I once again claimed my rightful place on Joe and Dave’s couch and proceeded to fall asleep instantly. I woke up, took my second shower of tour, and snuck out of the house before the boys woke up, in order to get some solo work done at a coffee shop down the street. I got through another chapter and set of writing prompts from the book How To Write About Music (is it working?) before regathering with Stoops for my final night of the run at The Basement. Nashville may be the new hometown of Stoop Kids, but they are still fresh enough that they haven’t played many shows they’ve actually felt good about there. Sam told me this was their best one yet. Little Stranger wrapped their set, and as the boys climbed on stage for their turn, my job as road manager and photographer came to an end.

Despite the freezing temperatures, injured feet, flu-ridden musicians, and bizarre venues, it was a great run. I grew up an only child and always told my mom that I wanted a brother; now I have five—plus some new friends in Little Stranger. I love the boys of Stoop Kids… and they love me enough not to care when I fart in their green rooms. What more do you need?

The Stoop kids will be playing on Monday, February 12 at 3 Keys in the Ace Hotel, opening for Big Freedia. For more information, visit stoopkidsmusic.com.