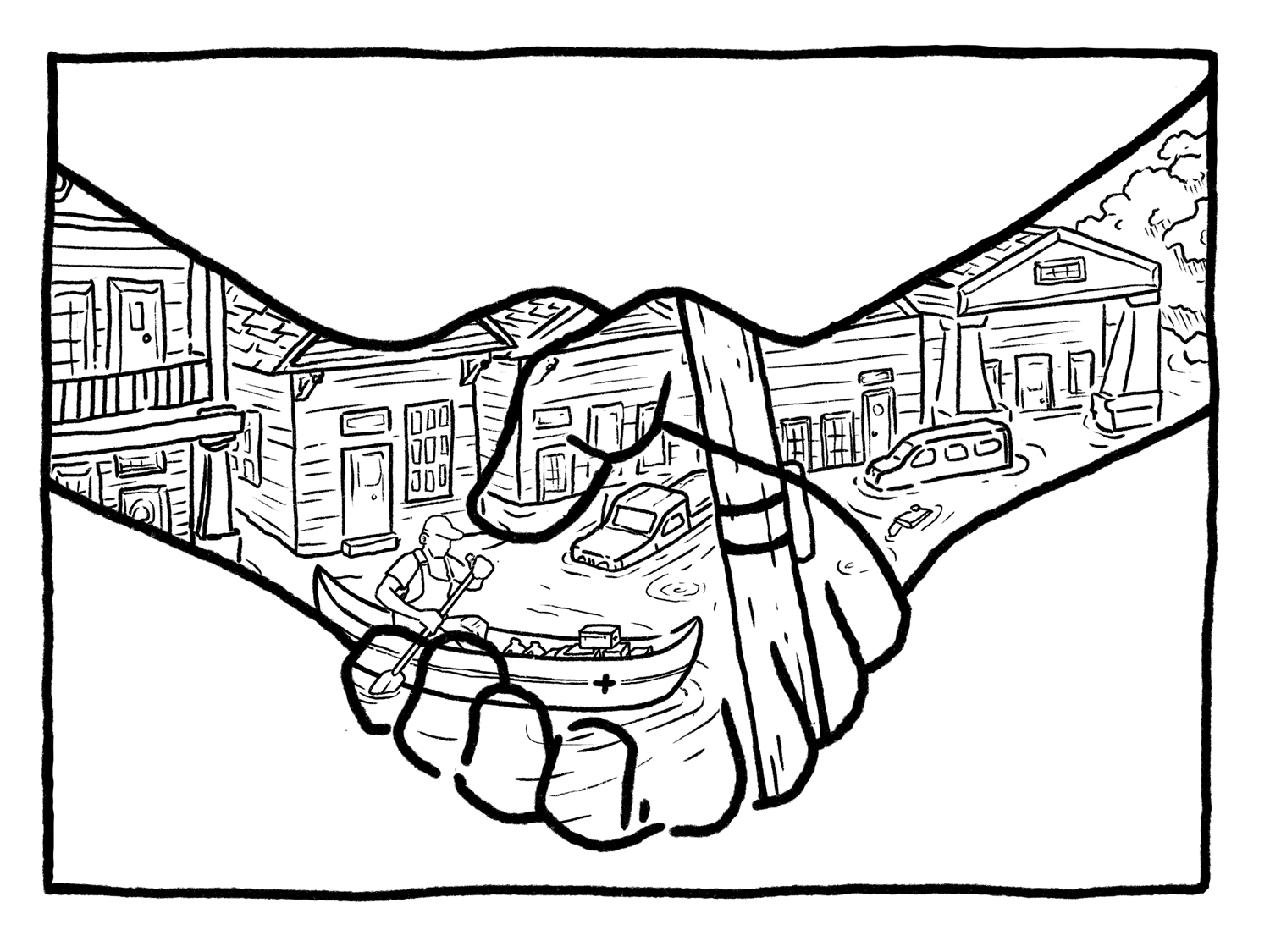 This past July, on the Wednesday before Hurricane Barry, the Greater New Orleans region experienced major flooding which shut down most of the city. Of course, this was not the first time we have experienced such flooding, but with Barry looming and high river levels threatening the levee, anxiety was elevated. Several members of the Trystereo collective made preparations, knowing that extreme weather events can increase need and demand for our services. With the New Orleans Syringe Access Program (NOSAP)—the only harm reduction service provider in New Orleans with both state and federal funding—closed during this time, the Trystereo hotline became a primary point of access for sterile drug use and wound care supplies. In the 72 hours before the storm was due to hit, Trystereo’s Hurricane Response Team provided harm reduction supplies to over 300 people, all of whom were concerned about what would happen if they were cut off from access to sterile supplies, the overdose-reversal drug naloxone (often referred to by the brand name Narcan), or suboxone treatment. Without access to these supplies and services, people who use drugs are at risk of premature and preventable death.

WHAT IS HARM REDUCTION?

Harm reduction is a philosophy—and a movement—by and for people who use drugs and the people who love them. The reality is that people do use drugs and will continue to do so. Rather than moralizing, stigmatizing, or deploying punitive and ineffective strategies to address drug use (like the catastrophic and deadly War on Drugs), harm reduction centers people who use drugs as active agents of change in promoting their own survival and dignity through policy and direct services. We also recognize that the vulnerability experienced by people who use drugs is compounded by multiply-marginalized statuses and identities related to class, race, former imprisonment, poverty, documentation status, trauma, disability, and gender/sexuality. Through these values and acts of mutual aid, we are devoted to shifting cultural understanding and the public health paradigm.

Harm reduction was born from radical activism in the 1980s in collaboration with activist groups like ACT-UP as a response to the HIV/AIDS crisis. By 1988, activist Dave Purchase began the first Syringe Access Program (SAP) in Tacoma, Washington. Purchase set up this exchange on a downtown street outside a house where people used heroin. He handed out supplies to prevent HIV, Hepatitis C (HCV), abscesses, and other harms and complications associated with doing drugs. A few years later, Dan Bigg of Chicago Recovery Alliance* began distributing harm reduction supplies in Chicago, while piloting one of the nation’s first naloxone programs. Imani Woods was a founder of the Harm Reduction Coalition—she focused on empowering and bringing harm reduction services to Black communities. Purchase, Bigg, Woods, and countless other activists distributed harm reduction supplies during a time when syringe exchange and distribution was a legal gray zone. Their efforts saved countless lives and helped pave the way for groups like Trystereo.

There is still work to be done, however. Though Louisiana legalized syringe access programs in 2017, these programs must be authorized by local governments. Currently, New Orleans, Baton Rouge, and Shreveport are the only cities in Louisiana which offer these programs. Louisiana and many other states have Good Samaritan laws in place to protect individuals who offer emergency aid, such as administering naloxone or contacting emergency medical services, to people who have overdosed. For the most part, the New Orleans Police Department has had a positive track record upholding the Good Samaritan law, though there have been exceptions to this. Outside of New Orleans, there have been cases in which police officers, aware of the Good Samaritan laws, have instead sought out evidence (e.g. that the individual who reported the overdose injected or obtained drugs for another person) to arrest these individuals on drug-induced homicide charges. Unsurprisingly, this disproportionately criminalizes and endangers poor people and Black and brown communities. It should not be a crime to save another person’s life.

REDUCING HARM IN A CITY THAT FLOODS

Trystereo’s participants come from diverse backgrounds. Some of the people we engage with are lawyers, nurses, offshoremen, and a variety of other folks with stable professions. The majority of Trystereo’s participant base, however, experience housing insecurity, live outside, are homebound due to disabilities, need access to a variety of medications, have criminal records, and/or have limited access to transportation. Many may experience mental health issues—trauma in particular—from previous disasters and/or their personal lives. Simply put, many of our participants don’t have access to the benefits that come with economic capital, like basic survival security. When a disaster strikes, our participants’ needs do not recede. Instead, it becomes even more crucial to meet the needs of our drug-using comrades as they will likely be the most negatively impacted and, more often than not, have limited or fragmented support networks. Our participants are of course resilient: a coded word, often applied to marginalized people implying that their ability to survive is and ought to be their sole responsibility, rather than one shared with the social institutions and power structures that have almost total tyranny over a person’s quality of life. Bootstraps aside, the communities we engage with may be the most innovative and dynamic of any. Due to the stigma and lack of respect and support they have endured, drug-using communities have developed their own systems.

Dave Purchase, Dan Bigg, Imani Woods, and so many others fought to make the harm reduction movement what it is today. However, harm reduction programs are still underfunded, despite the fact that their efforts are supported by international bodies such as the Joint United Nations Programme on HIV/AIDS (UNAIDS). Groups like Trystereo use grassroots fundraising, like benefit shows and t-shirt sales, to supplement income for supplies that grants cannot provide. Though the U.S. Department of Health and Human Services recently awarded the state of Louisiana almost $7 million in grants to address the opioid epidemic, the majority of those funds are meant for rehabilitation-related services. On paper this number might seem impressive, but for some perspective: the Louisiana Stadium and Exposition District’s spending for the 2017-18 fiscal year was over $91 million. In a July 2019 meeting, Sarah Babcock, Emergency Manager of New Orleans Department of Public Health, cited the following statistic: most cities in the U.S. spend $86 per person on public health, while the City of New Orleans spends merely $5 per person. Harm reduction, as a part of public health, is woefully underfunded. This small pool of funds becomes an even bigger issue when emergency situations like hurricanes arise.

Funding is not the only concern—we need a more cohesive emergency preparedness plan in place for medical, public health, and social services at the state, local, and community levels. This plan must include harm reduction. The responsibility cannot lie solely on the shoulders of the harm reduction and drug-using communities. We deserve the support and resources that larger, established institutions have access to, and they must be held accountable when they fall short.

From the hundreds of interactions that Trystereo volunteers had with participants between July 10 and 14, we learned that several local medical and public health clinics did not let their patients know they would be closed due to the threat of Barry. This lack of communication, indicative of flaws in emergency protocol, meant that many people were left without access to services they desperately needed. If Barry had indeed become a disaster situation in New Orleans, people on suboxone treatment could have either gone through dangerous detox or, if they had chosen to use again, been at risk for overdose (as their tolerance levels would have decreased). Individuals who were unable to stock up on HIV medications or other medications and services would have been at increased risk for adverse health outcomes. Beyond the material consequences of this planning failure, it also implies that public health systems don’t care about people who use drugs (or any underserved community), and consequently damages the trust people have in those systems.

At the 2018 National Harm Reduction Conference, there was a roundtable panel on the topic of Disaster Harm Reduction. Representatives of Trystereo were at the table, along with members of Mutual Aid Disaster Relief (MADR), Rebel Recovery (Florida), North Carolina Harm Reduction Coalition, Harm Reduction Coalition (East & West), and harm reduction comrades from Virginia and other locales. With the exception of MADR, most organizations did not have a concrete disaster plan, although many at the table had provided supplies during disasters like Hurricanes Harvey and Maria. A group in Florida loaded canoes with harm reduction supplies and paddled to a park where drug users and houseless folks hung out. There, they distributed harm reduction supplies along with water and socks. At this panel, we discussed how to put a protocol in place so our communities have access to what they need to survive.

Inspired by that panel, Trystereo applied for and was awarded a Hurricane Preparedness Grant earlier in 2019. We used the grant money to purchase supplies to create kits to distribute to participants, in the case of another major storm or other event. These kits contained sterile needles and other supplies or “works” for safer injection, as well as wound care kits, naloxone, and water—all necessary to prevent infection and overdose. Based on our earlier projections, we had expected these supply kits to last us for the entirety of the 2019 hurricane season. But by the time the threat of Barry had passed, we had met with over 300 people, and we were out of emergency kits and low on all other supplies. We put out a call for donations of supplies and money, which in the spirit of mutual aid was answered by partner organizations, local agencies, and supporters across North America. Collaboration and resource-sharing is vital.

TREAT A CRISIS LIKE A CRISIS: LET US LIVE

There is no such thing as a purely natural disaster. Rather, there are weather events that become disasters due to systemic social, economic, and political inequalities. In response to “disaster capitalism,” a term author and activist Naomi Klein coined in her book The Shock Doctrine, the writing collective and Commune Magazine contributor Out of the Woods suggests the remedy of “disaster communism,” where communities pool energy and resources to confront and change the systemic violence not just during climate crises but in everyday life as well.

The issues our participants faced over the weekend of July 10 are unacceptable. The onus is upon all service providers to ensure that there is never such a lapse in care again, whether or not a disaster is imminent. We were fortunate that Barry did not wreak havoc on New Orleans, though it did cause harm to other communities in the region. Hurricane season 2019 is still underway, and there are many other hurricane seasons to come. These systemic problems need to be addressed now, with the input and leadership of drug-using communities—with a harm reduction approach—in order to avoid a human-created disaster when the next natural event occurs.

For more information on Trystereo, visit trystereo.org. If you or anyone in your community needs our harm reduction services, please email us at nolaharmreduction@gmail.com or text our hotline: (504) 535-4766. If you are interested in solidarity-based disaster response tools and resources, please visit Mutual Aid Disaster Relief’s website at mutualaiddisasterrelief.org.

*Dan Bigg provided Narcan to Trystereo for many years and was a beloved advocate, comrade, and human. He passed away on August 21, 2018 and is greatly missed.