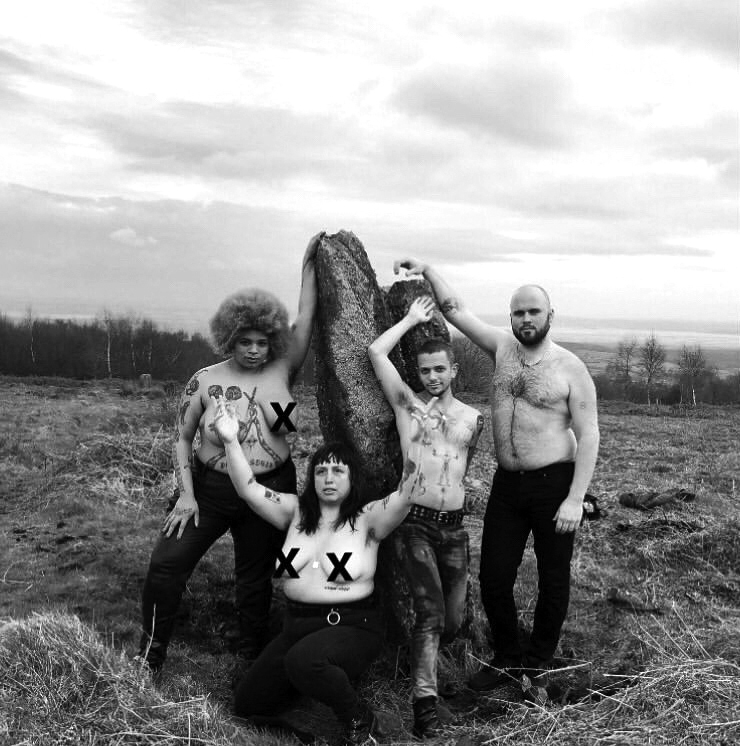 Maria Elena plays guitar in Special Interest, a local four piece punk band that combines elements of glam rock and no wave into a precise and deranged vision of punk. Propulsive drum machines and swirling layers of detuned samples by Ruth Mascelli, with driving bass lines from Nathan Cassiani, create the foundation for Maria’s angular guitar work and Ruth’s dissonant synth lines. Front and center are Alli Logout’s commanding vocals and razor-sharp lyrics, moving from high camp satire to insightful political imperatives, often within the course of one song. Special Interest has been playing together for four years. This was their first European tour.

It’s been two weeks in the U.K. but it feels like a month. We were invited to play Static Shock Fest in London this fateful spring in the year 2020. We booked additional U.K. tour dates in what turned out to be a very unfortunately-timed trip to Europe.

As we roll our bags through Heathrow Airport, “My Jamaican Guy” plays overhead and I begin to get an inkling of what will become extremely evident: The U.K. I’ve sought for 25 years is both dead and alive and well. An easy assertion to come to as we prepare to play a massive international contemporary punk fest and stroll through Camden Market, past stalls that sell digital prints of The Clash. For how unbelievably commodified punk is, we sure can’t seem to let it go.

The night before we flew to London we played a banger in New York City—Terrorist, L.O.T.I.O.N., and the real love angel music baby Dreamcrusher. It was a killer Tuesday night show. We lost our goddamn minds to Dreamcrusher, and NYC rock photographers were flashing, trying to get a sliver of the intensity this goddess brings to their audience. I got prickly as these fools took up much of the space among 150 people who travelled across NYC and parted with 15 bucks on a Tuesday night to see a show. I found myself staring at the digital screens to see how they lost their shot to the strobe and incense smoke.

Two days later at our sold-out Static Shock show in London, a girl hopped on the stage at D.I.Y. Space London to shoot pictures of our lead singer Alli while standing directly in front of me (rude!). Later, as I reached new highs of lividity about these photographers I saw the photos from NYC. See, I do think there is something fucked about a lot of photographers. The truth is photography is this emotional intersection of self and other, and there’s mountains of meaning in what the lens catches. There is something deeply suspect if this show is the only photos of Black artists you will take this year. And honestly, if your heart isn’t there and this is a parasitic documentation of the exotique, your photos will always turn out like shit. But I look on my phone and damn, some of the NYC photos are incredible. Lil Maria inside me is freaking out. IT’S FREAKING INCREDIBLE THAT BANDS LOOK LIKE THIS. So I believe the true lovers out there manage to document something well and the others are pests. What can you do? 1I pushed the London photographer off the stage. ¯\_(ツ)_/¯

It’s day three of Static Shock and we’re at ExFed, a warehouse space in London. The sound is compromised by the vast head space but the kids are still bopping around. Lead singers are strutting on stage making grand statements about how fucked up things are and Sanders is falling further and further behind and we all are dressed the same. These macro assertions—us and them. Wake up EVERYBODY ELSE. We’re the ones who will change it ALL. They all sound so oblique and thin at the same time, especially when things still happen to us like a booker’s roommate is a fragile white supremacist was offended by our show and blocked us from sleeping at their house and trolled our band email. This wasn’t the first time we’ve dealt with pissants either. And here we are a few months later and it really does feel like us versus them. Here’s to hoping those pale English boys are in the streets now humbly supporting Black organizers and finally dealing with the active racism and misogyny in the punk community. I have the pleasure of sitting at a picnic table outside of ExFed and talking to Bryony Beynon2Another love angel music baby whom you may know from Good Throb and BB & The Blips and a Canadian who works in harm reduction in Dublin named Legs. We mostly talk about volunteer-run harm reduction work from a global perspective, and it’s heartening to know that people remain volunteering their time and doing the true DIY work of giving people what they need. There’s a fascinating, deeply triggering moment when I realize I’m analogizing safe injection sites to (doomed) punk collective spaces. I mean don’t get me wrong, I am so proud of the work our friends are doing and thank gawd the energy of our tireless punk coordinators isn’t going into a damn zine library, but shit is harrowing. Gawd bless the punk coordinators! May you get paid a living wage and may there be a beautiful, accessible, rural, intersectional, punk retirement home in 30 to 40 years. 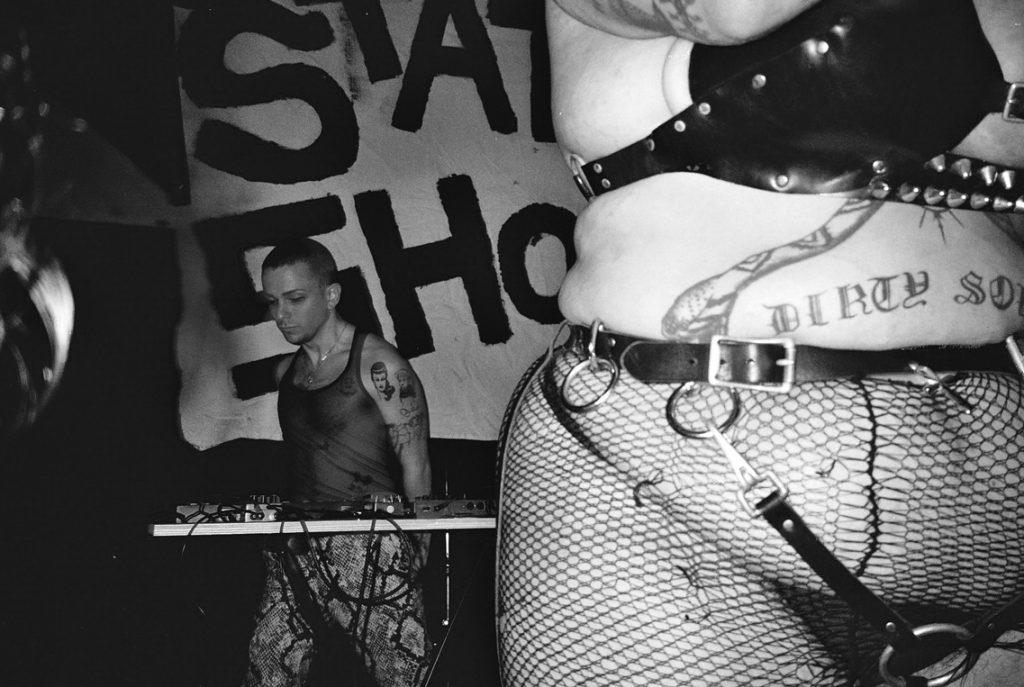 “Can you ban men from your shows?” Becky asks me. Becky is a young queer I had the pleasure of talking to at the two London shows (they had us sign their record they brought to the show!). “I hear you, but we don’t roll like that,” I reply. It’s something some of our audience seems to really want. They want us to make it safe for them to stand still, heads bobbing unperturbed. Don’t get me wrong, young Becky danced their ass off. 3Gawd bless you, Becky in London. and Madeleine in Manchester, and Alice in Kansas City. And Sun and Rach in Toronto. gawd bless all you young ones that dance your butts off or stand alert with your eyes darting instrument to instrument picking what you like. I’m pre-ordering all your records. But many people that get right up close, specifically the sexagenarian record collectors and well-meaning white feminists, aren’t trying to lose their goddamn minds and we are not here to support that. As a sweaty Tejana with a bad back who loses her goddamn mind right in front when given the chance to see her favorite bands, I’m telling you: we came here to dance.

There’s this real lack of awareness of the difference between safety from truly fucked up people and general crowd control, so you stand still up at the front of the crowd, right in front of the band, watching what is a truly vital front person, and drink the cocktail you paid £8 for. In the end, I’m biased. The band we formed is something I dreamt of since I was 15. If I was in the audience I would be losing my goddamn mind. I am often bubbling over with love and awe for what my bandmates create. I can’t help but bliss out and sing along. I often mess up as I play because of this. The girl can’t help it, y’know?

We’re a week in and it’s become clear that Corona is about to really fuck up everything. What can I say about Corona? As each day passed we were more and more marred with worry and guilt. Each day after the travel ban we held a band meeting. Is it ethical to play a show? Are we endangering our audience? Our loved ones? The shows were all pretty much sold out but the capacities ranged from 50 to 150 max. We charted our tour coughs and congestion. March in the U.K. meant cold, wet, rainy English weather, often sleeping in chilly rooms, with the added insult of snow in Glasgow. Do you go home? Do you give ‘em one last show? We chose to give ‘em a show—a show that in turn felt unbelievably bleak to play.

I’m shuffling through everything. We have so few European tour hallmarks. At least one of us looks haunted in every photo. I cried in public in Scotland as borders closed. An extremely Scottish older fan that night did leaven our heavy souls. He stood up front, gripping his pint. He raised his fist and yelled in his extremely Glaswegian accent, “LYRICS, LYRICS!” He also kept saying “DAHRK ENTRIES” about one of Nathan’s Bauhausian bass lines.

As I flew home alone without my treasured bandmates, anxious that I had a temperature and would be held indefinitely at one of the airports 4Consequently, I was only asked if I’d been to China or Italy and then waved through. There were almost zero precautions in London or the U.S., I tried to make sense of this international punk world and its role in our lives. I mean, what actually is important when the world is in this state? Subcultures are panacea and salvation. Punk chants are catchy but this “us/them” thing is so bunk when we know the truth of how people treat each other. Fashion punks were always (and remain) useless. In general, an analysis of punk past or present is: A) a waste of time, B) probably a narrow scope, and C) stinks of colonialism and misguided ownership. The real analysis we’re begging for is how so many punks are actually very into ownership but rarely into responsibility. It’s ownership of truth, ownership of a leather jacket, ownership of a dog, a Toyota truck—yet in the face of conflict or that moment to directly act within a social schema, punks are the last to act and the first to say, “Oh I knew that was gonna happen” after the damn fact.

Before tour, back on Mardi Gras day, we were having our third annual ridiculous punk show. Alli was vibed out by a creepy young white dude and then subsequently told by a punk attendee, “That dude is this guy I know about that’s racist.” He had been staring aggressively at Alli and spitting at the ground in front of them. I was one of many who noticed this asshole at our show in the parking lot. I waited until three songs into our set to stop playing and push him away from the front. I should have been getting him out of there when TOAD was playing and I first noticed him staring people down. The people who recognized him should have done it immediately. Why do we wait for these idiots to prove what shit they are? We have got to do better. If we aren’t taking the responsibility for caring about Black life, if we aren’t actively dismantling our own bullshit and pursuing a life in service to the truth we’re always talking about, we might as well keep driving past a place as special as New Orleans.

I’ve been home for two weeks now. There’s a parasite enveloping the garden that my beloved planted. Its thin fleshy yellow vines curl around the stems of the mugwort and arugula and reach out to the next stem. It’s called cuscuta. As I squat alone in the dirt pulling it off plant by plant, I can’t help but notice the similarities to COVID it has. It would blanket the whole world if it could. 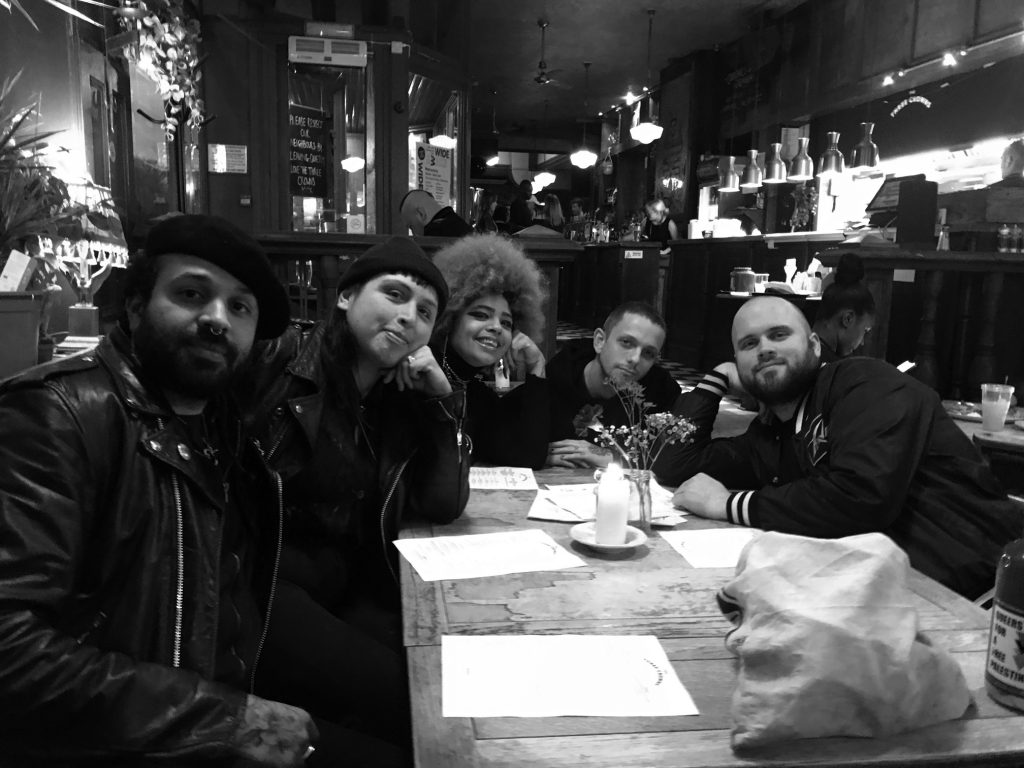 Our last Supper in London featuring Marcus, the tour driver of dreams and an organizer for the extremely significant Decolonize Fest. He is loved across the globe and we are grateful to have spent this uniquely trying time with him (Waiting Room, London).

Special Interest just released their second album The Passion Of. You can stream it on specialinterestno.bandcamp.com.

Top photo: Special Interest in emotional ruins by some ruins, Just outside of Cardiff, Wales (Photo by Marcus).