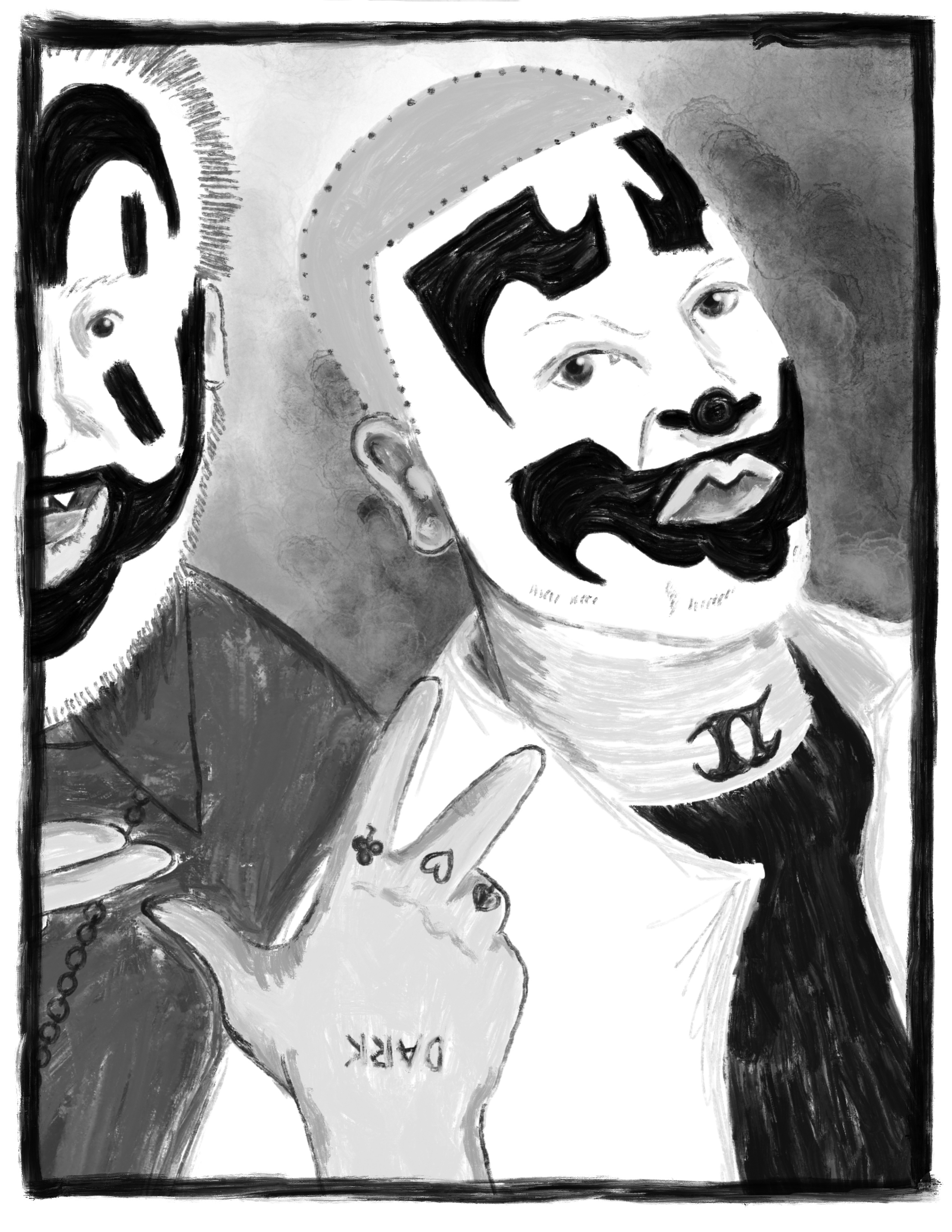 It took me years to admit to others that I used to be really into Insane Clown Posse, the immediately recognizable horror hip-hop duo from Detroit, Michigan that spawned a legion of followers known as the Juggalos. Carnival of Carnage (1992), Ringmaster (1994), and The Great Milenko (1997) were my peak lyrical references, and I had all the ICP paraphernalia the Hot Topic in Lakeside Mall could carry. Drinking Faygo in the Zuppardo’s parking lot in Metairie was a good time. Now I’ve told the world: judge me. Luckily I clawed myself out of that phase after hearing their much-criticized eighth release, The Wraith: Shangri-La, which was released in 2002. The album concludes with “Thy Unveiling,” where ICP admit that all along they were Christians in service to God. Their thematic Jokers Card album releases, which dealt with carnival-themed horror and atrocities, were actually leading up to this pivotal point of… self-absolution? This fell really flat with me and I purged them from my life soon after.

Years later I ran across an article in The Guardian by photojournalist Chris Arnade entitled, “The People Who Challenged My Atheism Were Drug Addicts and Prostitutes.” In the article, he examines how the economic trappings of poor people force them to turn to the most accessible escape available to them: religion. “They have their faith because what they believe in doesn’t judge them. Who am I to tell them that what they believe is irrational?” After reading this, I regained a sort of sympathy for the Juggalo subculture. Maybe the Christain underpinnings were a tool for unification? If nothing else, ICP’s religious elements sit firmly in the realm of irrationality.

At its core, ICP and the Juggalo subculture (or as they prefer, the Juggalo Family) aim at uniting poor to middle class young people who seek a community outside of mainstream culture. While they say ALL people are welcome, let’s be real: their main audience is white people—primarily white males. As a subculture, they still reinforce the societal prejudices of the dominant culture they so strongly aim to reject. ICP has been highly criticized for lyrics that perpetuate misogyny, but their stance against racism is admirable, and they have been openly anti-racist their whole career. In 2017, a rally was held in Washington D.C. to protest the F.B.I.’s classification of Juggalos as a gang. The Juggalo March saw an estimated 1,500 protestors gather to protest the discrimination they felt about being labeled a gang.

Insane Clown Posse is a weird but familiar American phenomenon that capitalizes off the intersectionality of economic and social disparity. They talk big about being too stupid, too ugly, and too broke for society’s standards. Juggalo Family is a world where all broken people find unity together in their weird otherness. I caught up with ICP co-founder Shaggy 2 Dope to talk new music, politics, and other dumb shit.

Y’all had a video shoot going on? How was that?

Yeah man, it was fucking awesome. It was for a song called “Nobody’s Fault,” and it was cool as shit. We set it at a fair after they’re closed, so we had the whole fair to ourselves. So that experience alone, even if we weren’t shooting a video, it was pretty cool. Because you never just get to run the rides and do all that shit, you know what I’m saying?

How’s the tour with the new album, Fearless Fred Fury? Y’all were in New Orleans maybe six months ago or something like that.

Yeah, we were in New Orleans; we did Juggalo Day there. Actually, it was more like Juggalo Weekend. That’s what we do now… it’s a weekend in February that we just pick, and we’re going to warm places, you know what I’m saying? Because a lot of Juggalos like to travel and we’ve been in a city where it’s warm and we know there’s a lot of shit to do and the city’s like super in effect. So, New Orleans obviously fits all that criteria: warm, it’s fucking super awesome there, tons of shit to do. I know you guys get tons of tours and shit like that, but it’s not every day that you see an influx of Juggalos come through the French Quarter.

I guess it gives y’all more time to relax and really prepare to put on a good show too.

Oh, there’s no relaxing over here, man. That would be very nice but yeah, we do shit 24/7.

Let me hear more about that.

A lot of bands are just a band and that’s it, you know? We’re constantly making moves and shit. We run our own business and whatnot, and touring is just part of it. So even when we’re not touring or recording, we’re still working… always working.

We’re on the second of the Joker Decks; can you tell me a little bit about the thematic differences between the two of them?

It’s still basically along the same lines. It’s a face behind a moral really. It gives you a chance to look at yourself and basically be your own judge and see what kind of person you are, so it’s a continuation of that. As far as the actual music goes, it’s just more new school. A lot of people are like, “Aw man you need to come out with another record like Great Milenko or something.” But that record’s already out; we can’t do that, that’s been done! [laughs] Each record has its own different flavor, and to go back and duplicate that just doesn’t happen for any artist or any record.

Can you talk a little bit about the Juggalo March? It’s been a couple years now. Have you seen the perception of Juggalos change?

You know, I don’t really see the perception that much different of Juggalos, but definitely what we have seen since then is just more acceptance. I don’t think people are as skeptical and scared of Juggalos as they used to be. Because in areas where they have big problems with gangs and whatnot, that’s still a big thing with them. If you’re a Juggalo, you get fucked up for being in a gang, you know what I’m saying? That’s the bottom line, that’s never gonna change now because they never said that they [Juggalos] weren’t [a gang]. They just never came out with another list, you know what I’m sayin’? So, you know, I think that march, it just brought more respect and it knocked a lotta fear out of it. People aren’t as afraid to go to Juggalo events, I think, as much as they used to be, and I think—hopefully—police chilled out a lot… quit roughin’ motherfuckers up for no reason and shit. That still happens a lot, but I don’t think as much as it was. And that was a big thing for us, you know. It was one of the biggest things we ever did in our career. And we didn’t know if ten people were gonna be there; we didn’t know if 10,000 people were gonna be there, you know, so it was real scary jumping into that blindfolded, but it worked fucking great… We went out there and people thought fuckin’ Juggalos were gonna wild out and act stupid there and nobody did, you know what I’m sayin’? It was fuckin’ great, man.

The Juggalo March was a big political step. Y’all created a platform for people to have a voice, which is great. Have you seen any political changes come from within the community?

We don’t give a shit about that. I don’t expect nobody to approach me on any kinda political level, ‘cause I don’t know shit about politics. And I don’t care to. I’m not a political guy. Juggalos, we gettin’ fucked up, but we are the only people that could do somethin’ about it, so we did, you know? That’s it. Nobody’s runnin’ for like, no mayors or government shit. I can’t tell you who the fuckin’ Vice President is. I know Donald Trump’s the President. Of course we all know that, but I don’t know who Michigan’s governor is… who the fuck is the Mayor of Detroit? [laughs] I don’t know shit and I don’t give a fuck, you know? I’m not a political guy. We’re entertainers, we make music, we ain’t here to fuckin’ get into politics or sit here and give you a fuckin’ educational lesson.

Your presidential slogan right there: “I don’t give a fuck.”

It’s your legacy, man. It’s your career, what you’re about to leave Earth, you know what I’m sayin’? When we’re fuckin’ dead and we’re outta here and shit, you know, there’s no question in my mind the Juggalos are gonna continue. There’s no question. And so it’s just like, what mark did you leave? And I think we’ve fucking done a lot. And we still got a lotta career left, you know?  Fuck, nowadays in rap, you can go until you’re fuckin’ dead, you know what I’m sayin’? It’s not like it was back in the day. You don’t have to just be like 20 to 25 then your career is over like it was in the early or mid ‘90s. So the way we look at it, we’re just fuckin’ startin’.

Insane Clown Posse will be playing House of Blues on Friday, October 18. For more info, check out insaneclownposse.com.