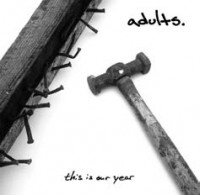 ADULTS
THIS IS OUR YEAR
(THIS IS HURRY UP AND WAIT)
I have to channel my inner Bryan Funck because I was hoping he’d review this record but dude is so “busy” these days, mostly sending mass texts from what I can tell. So here goes. Adults are dumb dumbs. They finally put out a solid album—on vinyl no less with a hand silk-screened insert with all the right typewriter fonts and all the right people namedropped—and then go and break up because Paul moved away. New Orleans Sucks Because You Suck. James “The Wizard” Whitten recorded this album. He should stop taking long 420 bro trips with Craig Oubre and get back to work engineering great sounding punk records. Soundwise, you can tell Adults worship Bruce Springsteen and Tim Armstrong equally. That’s fine, but they should indulge their inner Eddie Vedder more. Adults, instead of breaking up, why don’t y’all tour? I can help set it up. Three shows a day, minimum. I’m quoted on the back of this record, along with many of my fellow scenesters, as saying “I like your band.” I stand by it. Adults, find a way to keep it together. —Bryan Funck Dan Fox 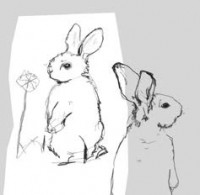 BEAT HAPPENING
LOOK AROUND
(DOMINO)
Remember the movie A Nightmare Before Christmas? Okay, remember that scene where Jack discovers all these different portals to different holiday-themed towns? There was an Easter one, a Thanksgiving one, a Valentine’s Day one. Or maybe none of the above. Who’s seen this movie in the last ten years? Anyhoo, If Jack had just kept walking around a bit longer he’d have stumbled across a portal with a big yellow shield painted on it, and a black K in the middle. If he’d chosen that portal instead of the Christmas/ Halloween one, he’d have landed in front of the Olympia, Washington co- op, shaken granola crumbs from his travel-weary skeleton head, and locked eyes with Calvin Johnson and the rest of the members of Beat Happening, who are there playing the songs on this career retrospective album, and always will be, until the end of time. This album, the first in their history to come out on a label this large, takes listeners new to the crabby-twee band on a musical journey starting at their debut self-titled album, to their last hurrah, 1992’s You Turn Me On—with a one-off single done in 2000 thrown in for good measure. Is it Indian Summer already? Apparently so! —Kelly McClure 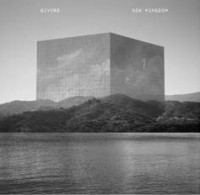 GIVERS
NEW KINGDOM
(GLASSNOTE)
New Kingdom signals new days and a different sound for this Lafayette- to-New Orleans band. Having made a splash with their debut In Light, and with songs like “Up Up Up,” it’s not unusual for a group like GIVERS to dive into making some changes. The biggest change is more electronics, more synths, more keyboards. Guitars as the main instruments crop up on songs like the hopeful, snappy “Sure Thang ” and the anthemic “Record High, Record Low,” hearkening back to the feel of In Light, but the rest of Kingdom is given over to synthetic beats and a sweeping sound that at times threatens to carry away Taylor Guarisco and Tiffany Lamson’s vocals, one of GIVERS’ best features. As Kingdom rolls along, it becomes clear that the band’s new grooves are as infectious as ever despite the heavy synth-pop emphasis. Once listeners are bowled over by the wall of sound that is “Bermuda,” the music settles in and invites them to dance and play, as GIVERS have been doing all along. By the time the closer, “Lightning,” arrives, with its hint of musical saw and its gentle stringed caresses, the wave of GIVERS’ latest has crested. Best to ride it and revel in it. —Leigh Checkman 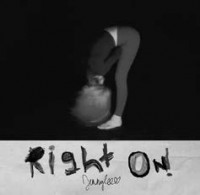 JENNYLEE
RIGHT ON!
(ROUGH TRADE)
This debut solo album from Warpaint bassist Jenny Lee Lindberg is crisp and hazy all at once. The vocals are front and center, making for an ideal headphone experience, and the drums keep a steady, snappy pulse. But the overall mood you’ll find yourself sinking into is that of a rainy day spent staring out the window, thinking about everyone who’s done you wrong, or right. Opener “Blind” is sexy and heavy, like a dark patch of moss grazing your leg in the lake. “Never” is pure ‘80s throwback, in the best possible way, especially the drums, which scream “this drummer loves Joy Division!” “White Devil,” towards the end of the album, is dark and rumbling, with some stank to it—reminiscent of The Cure’s early days. If a person were forced to choose between Warpaint and Jenny Lee’s solo work, it would be a hard decision, but this just might win the fight. It’ll be exciting to hear what else she has welling up, eager to spill out into more deliciously moody/broody songs. —Kelly McClure 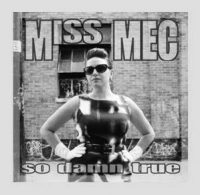 MISS MEC
SO DAMN TRUE
(INDEPENDENT)
After three years in the darkly rocking band Strange Roux, and some time before that as a street busker and Caribbean soul reggae artist, singer Michelle Cunningham is stepping out on her own as Miss Mec, with an EP of attitude-filled songs that bring another era to the present day. Whether she kicks out a slow strut that muses over the end of a relationship in “I Can’t Believe My Baby Left Me All Alone,” or states her independence in “Ain’t No Use,” Cunningham’s vocals retain the same commanding presence— reminiscent of Amy Winehouse—that she had with the Roux. What differs here is the variety. The backing band can rock out the ska on “Give Me Your Love” as easily as they can swing the doo-wop on “Hush,” which in turn brings out Cunningham’s more loving character as a singer. There are a couple of jarring hiccups—the key change in “I Can’t Believe…” seems to have been barely managed by both the singer and the band—but overall, the songs are strong. So Damn True gives listeners a tantalizing taste of an artist who is still growing and changing… but it is, after all, only a taste. —Leigh Checkman 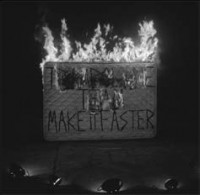 TRAMPOLINE TEAM
MAKE IT FASTER
(PELICAN POW POW)
Being casually introduced to this band, if you haven’t already been, is one of the best possible things that could happen to you. There’s something earnestly satisfying about loving a local band, in this “be true to your school” sort of way. Also worth mentioning is that this is the band’s debut album, which is INSANE because it melts so many faces, like damn near every face in the whole damn town, that’s how many faces it’s capable of melting. Pure, honest punk like “Make it Faster,” and “I Ain’t Got Shit” are few and far between in this musical shit storm world. Hold on to this album for dear life and say a prayer in your mind that this band never stops making music. —Kelly McClure 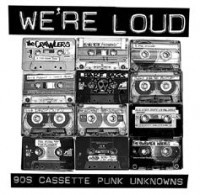 VARIOUS ARTISTS
WE’RE LOUD: 90s CASSETTE PUNK UNKNOWNS
(BLACK GLADIATOR/SLOVENLY)
A compilation of sorts, We’re Loud takes us on a musical journey through the work of unknown junkie guitar- slinger/songwriter/Connecticut kid Jaime Paul Lamb as he traipses about the greatest country on earth, from Phoenix to Houston to Southern California, back to Phoenix, Las Vegas, and Minneapolis. There are 19 bands represented here with names like Riky & The Buttz, Barf Bags, and Peoples Court. The sound harkens back to some of the best of ‘90s garage (Subsonics) and scuzz-punk (Teengenerate, Reatards), and requisite influences (‘70s/80s obscure punk of the Killed by Death and Bloodstains series, the ‘60s punk of Back from the Grave and Pebbles, Australian punks like The Saints, and unknowns like PVC and Testors who had ‘popular’ reissues out at the time). As the ‘90s came to an end, the Internet gave us the Goner Records bulletin board where “we” met a Vegas DJ named Bazooka Joe, who seemed to know a lot about a passing interest of mine, the high Effort/low Satisfaction world of reggae music. Turns out Joe knew about good punk rock too, and lucky for us, the many projects of Lamb were on his radar. Crispy four-track recordings of some super catchy rock & roll that were never intended to be released. Maybe a few copies each of these various cassettes were dubbed for friends. Highlights include Mega & The Nyrdz’ “I Lurk,” and the Oblong Boxers’ “Have You Ever Had a Guy Roll Up on You,” just to name two that would make for a great fantasy-split single. Many of these bands could’ve been hot among Maximum Rocknroll’s Top Ten lists (Shane White record reviews with lots of exclamation points). If you know what I’m talking about, buy one for yourself this Christmas. Saw one or two at Euclid Records, which should cover the demand among New Orleanians (already got mine). —Michael Bateman 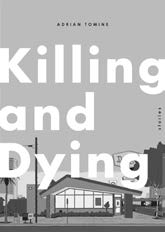 ADRIAN TOMINE
KILLING AND DYING
(DRAWN & QUARTERLY)
For those who haven’t spent much time reading graphic novels, it might seem hard to comprehend just how much the addition of images lends to the telling of a story. There are pluses and minuses to this. When reading a “normal” book, your brain does the work of filling in the images the words are feeding you. That’s usually more than half the fun of reading. A graphic novel does take that away, but here’s why that’s okay: the creator of the novel is better at making these pictures than your brain is, and these are the exact pictures they want you to be seeing. It allows you the full experience in translation of their vision, to your eyeballs, and Adrian Tomine is masterful at it. The stories contained in this book deal with mistaken identity (between a woman, and a woman who’s a porn star), domestic abuse, love, hope, and loneliness. Tomine is well known for his long running comic, Optic Nerve, which he started when he was 16. Now 41, his work is frequently featured in the New Yorker, and he’s won a shitload of awards for his books. If you’re looking for a good introduction to his work, Killing and Dying would be a fantastic one, but brace yourself for a bubbling well of emotions that you may not be ready for. —Kelly McClure

Z.W. MOHR
FINDING GOD IN THE WETSPOT
(NEXT LEFT PRESS)
Have you ever walked into a bar, locked eyes with a stranger, and had a completely intimate, almost sexual experience without even approaching them? Mohr’s collection of poetry, Finding God in the Wetspot, takes us through a mostly autobiographical experience in free verse form. Many of his poems deal with sexual experiences and dreams, while others romanticize New Orleans as a haven for subcultures and mysticism. His erotic poetry delves into barroom romances, backseat quickies and a catalogue of sexual interactions. “Love Fucks” wittily lists different types of sex, from the casual to exhausted to the revenge fuck. This poems ends with the love fuck, and it’s here the poem’s intentions rest. The poet uses eroticism as a means to show an idealistic love that connects people beyond the physical. It wouldn’t be right to call Mohr’s poetry simply erotic because eroticism appears only to be the bottom rung in his ladder towards idealism. His narrative voice is both mystical in tone and relatable in humor. His structuring is loose, but it gives his work flexibility to encompass a greater meaning. Mohr’s Finding God in the Wetspot creates an interesting juxtaposition using the somatic and bodily to discuss the spiritual. —Nathan Tucker