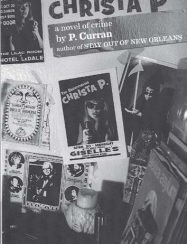 P. CURRAN
THE BREATHTAKING CHRISTA P.
(CADIZ & CADIZN’T)
New Orleans in the ‘90s: a great place for an escaped fugitive to hide in plain sight… or it would be for one particular fugitive if he hadn’t encountered someone who could hold his past against him. P. Curran’s latest novel attempts to expand on the worlds explored in his short stories (featured in Stay Out Of New Orleans) in an absorbingly convoluted tale of one man’s melange of odd jobs and attempts to keep his stories straight. Curran’s fugitive stumbles, second-  guesses himself, and tries to maneuver his way out of bad ends and dead ends before coming completely undone in this gutter noir filled with corrupt cops, families in conflict, blackmail, and a few dead bodies. The Breathtaking Christa P., despite its mentions of Jazz Fest and a plot point involving the May ‘95 flood, isn’t as married to New Orleans as Curran’s short stories are, nor does it have any supernatural elements. He eschews those entirely in the service of the fugitive’s point of view, and the feel of the novel suffers a little as a result. As pulp fiction goes, though, Christa P. is satisfying storytelling. —Leigh Checkman 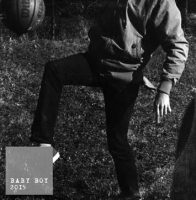 BABY BOY
2015
(SELF-RELEASED)
Baby Boy is one of the most underrated bands to ever come out of Louisiana.  Their sound has always been one notch  above most post-punk bands in the South and 2015 is evidence of that.  Existing as the other half of Thou, the ever-prominent shining star of Baton Rouge, Baby Boy has been relegated to the shadows of basement venues  and Bywater houses, occasionally  peeking out for some light. Since their  formation in late 2009 after the demise of Man Plus Building, the band has released three EPs, each better than the last. The thing that really completes this trilogy of EPs, though, is the recording quality of 2015. It sounds like their live show: heavy and huge. Songs like “Day Is Dying in The South” and “I’m Trying ” are really felt and contain the energy the band exudes on stage. What makes Baby Boy stick is their  ability to make the listener both want to break things in their apartment and cry with a harsh uncontrollable connection to everything. Unfortunately, this EP is the last thing that Baby Boy will put out. With members moving around the country, the band has said goodbye. I guess they saved the best for the last. R.I.P., friends. —Robert Landry 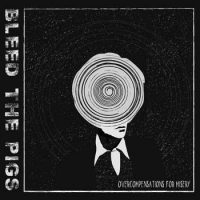 BLEED THE PIGS
OVERCOMPENSATIONS FOR MISERY EP
(SELF-RELEASED)
Crashing through the misogynistic doors of the Grand Ole Opry house and setting a fire, come Nashville natives Bleed The Pigs. Their latest EP, Overcompensations of Misery, is a 15- minute binge of raw energy and force. While predominantly a grindcore band, most songs contain the nuances of traditional metal. Leading singer Kayla Phillipa lays harsh vocals that hold powerful truths about oppression and privilege. Songs such as “Supremacy” and “White Washed” are typical for the band with their cathartic tempo and gut-wrenching tones. “Fear of Violent Service” stands out because it shies away from most of the faster rhythms and experiments with slower sludge elements. David Hobbs on guitar uses a loop station to create eerie patterns that evoke a dark atmosphere, which really complements the band’s sound.

Bleed The Pigs have mastered the art of versatility in their music. They can do it all. In most cases, only so much can be done with hardcore and bands end up sounding similar, which is really a commentary on the limits of the genre and less an indictment of the bands  themselves. Everything that Bleed the Pigs has recorded has come from a basement and they are proud of it. It sends a message of autonomy that  shouldn’t be overlooked by listeners searching for clean recordings. —Robert Landry 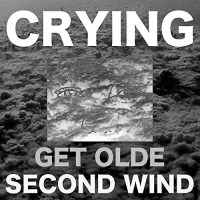 CRYING
SECOND WIND
(RUN FOR COVER RECORDS)
Crying is one of the most interesting and unique bands working today. In a scene of fusion groups and bands  meshing obscure genres together, Crying takes the cake. Blending elements of ‘90s pop rock with classic Super Nintendo synth patches, the band melds the bubblegum energy provided by the electronic stylings of Rayan Galloway on synth and guitar  with adorable and honest vocals from Elaiza Santos. Second Wind is the second official release from this New York band. “East Flight” starts off the disc with a spark of driving drums provided by Nick Corbo and polkadot flashes of computer sounds. Santo’s vocals are slow and caring with a pungent dose of empathy. The letterhead of the EP is “Batang Killyjoy,” which is trademark Crying, if more tedious and mature. The song has ins and outs, which leave the listener suspended and then caressed as if on Lakitu’s cloud. Santos experiments with vocals, becoming more comfortable and shedding some skin. In their  previous EP, her voice was somewhat suppressed. It’s nice to hear it shine and take charge. “Close,” the album closer, has a slow start. It’s a nice change of pace and builds into an array of notes, patterns, and brightness. The drone is swaying and heavy where Corbo, Galloway, and Santos all connect. The band has tapped into an honest sound  with Second Wind, reflecting the truth behind relationships and meditating on thoughts we all share. —Robert Landry 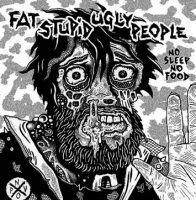 FAT STUPID UGLY PEOPLE
NO  SLEEP NO  FOOD
(SELF-RELEASED)
Local thrash/power violence heroes  Fat Stupid Ugly People do it again with another release even faster than their  Weight Loss Program EP. Awesome cover art by Bill Heintz (again), but pretty simplistic packaging. No lyric sheet and boy do I need one! The songs blaze by so fast that I can hardly  keep track, but with some of the most hilarious song titles I’ve ever heard: “When high school yearbooks become hit lists with pictures;” “Wheelchair DWI;” “I hope you brought your Juggalo repellent;” “This nuke only kills hipsters;” and my personal favorite, “No, Robby Calahan is not in Eyehategod.” Genius! Fat Stupid  Ugly People have been playing around town for over ten years, delivering  their brand of faster than hell, non-PC  humor, so it’s your loss if you don’t know ‘em or love ‘em. Also, some of the nicest guys you’ll ever meet in New Orleans (or any other town for that  matter). I’ll be on the lookout for a future vinyl release (with a lyric sheet please). —Carl Elvers 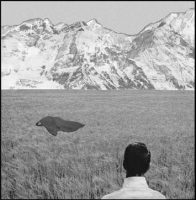 LADY LAMB
AFTER
(MOM+POP)
Aly Spaltro, otherwise known as Lady Lamb The Beekeeper, returns with a second album that proves she isn’t entirely immune to a sophomore slump of sorts, but it isn’t for her lack of trying. Dropping the “Beekeeper” from her pseudonym and paring  down the instrumental backing that  made much of her work on her first release, Ripely Pine, softer (and in some ways, easier to listen to), Spaltro  takes a tougher route with her music in After. When it works, it works well, showing off her vocal range far more effectively and establishing a more stream-of-consciousness tone that  suits her visceral imagery (see: the sly, deceptively playful speculations on love in “Vena Cava” and life in “Billions Of Eyes”). When it doesn’t work, Lady Lamb risks becoming a ponderous Feist or Fiona Apple knockoff, putting a couple of songs on After that seem more like histrionic filler, “Sunday Shoes” being the example that comes to mind. Such songs are few and far between,  blessedly exhibiting evidence of an artist who is becoming more thoughtful about arrangements and phrasing,  drawing listeners into her strange,  surreal world more than ever before… which is all any discerning listener could ask for. —Leigh Checkman 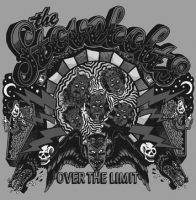 THE STOVEBOLTS
OVER THE LIMIT
(BLAHLL!)
Mississippi bands usually don’t disappoint and neither do Hattiesburg ’s the Stovebolts. Over the Limit, their  follow-up to debut To the Top, is a pretty heavy dose of barpunk riffs, twangy vocals, and coked-up tempo. Kind of a shady mix but I think that’s how they like it. “The Stovebolt Theme” is an over-the-top intro to the band, though strangely leads off side B of the vinyl. Stellar production and chops galore from the whole band make for a killer record. I can’t help but think this is something Jello Biafra would want to take over (don’t let him, though!). For fans of Nashville Pussy, ZZ Top, flash art, early Van Halen, and true Mississippi grit. —Dan Fox 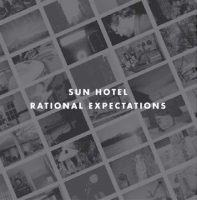 SUN HOTEL
RATIONAL EXPECTATIONS
(COMMUNITY RECORDS)
For those familiar with Sun Hotel, expectations of their new (and final) record would include heavy reverb and powerfully sad songwriting. However, there is more than any Sun Hotel fan is ready for. For those of you who are unfamiliar, as I was until this release, it’s time to catch up. There is something growing, living in Rational Expectations that is maybe unexplainable. Picture yourself in the first year of college, a new life and a new self in front of you. There is safety and maybe a little bit of energy. Now strip that away and pile on the weight of lost friends and uncertainty. Singer and songwriter Tyler Scurlock has used this process to refine the sound of Sun Hotel for the past five years. Their final release as a band, Rational Expectations, delivers in the same way that last bittersweet night with a drifting lover does. It pulls off the protective coverings of the earphones and whispers sweet nothings with songs like “11:57.” Bassist John St. Cyr takes hold of the rhythm to drag Scurlock’s vocals and Alex Hertz’s slow, open guitar chords. Tracks like “Bouquet” and “Tropic of Cancer” focus on the groove provided by drummer Ross Farbe, which create a strong  groundwork for sporadic vocals and guitars to bounce on. The closing songs, “Without Feather” and “Aprazolam” are carried mostly by Scurlock’s angry, sad lyrics. This album completes the legacy of Sun Hotel. It is a band ending where it started—a guitar in a quiet room with a heavy heart. —Robert Landry