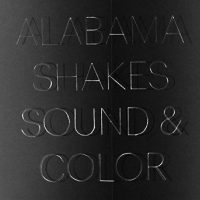 ALABAMA SHAKES
SOUND & COLOR
(ATO)
Alabama Shakes’ 2012 debut Boys & Girls heralded an auspicious beginning for these blues rockers, bringing the raw force of Brittany Howard’s voice, Zac Cockrell’s bass, Heath Fogg’s simple-yet-strong guitar work, and Steve Johnson’s steady feel on the drums into the national consciousness. The nearly nonstop touring that resulted from Boys’ success served to gel what was a fledgling band and improve its chops to the point where if Boys was a gentle wave, Sound & Color is a veritable tsunami that stands mightily on the shoulders of its predecessor. Drawing inspiration most notably from ‘70s soul and utilizing the talents of touring keyboardists Ben Tanner and Paul Horton, Sound makes it clear from the start that the Shakes have aimed high and mostly hit their marks. Howard’s vocals maintain their raw power while exploring an incredible virtuosity most evident on the funk of “Future People” and the pep of “Guess Who.” Fogg’s guitar work rises to meet her voice many times; for example, “Dunes” is rocked so commandingly, everyone else has no choice but to go along. When the Shakes grind the sophomore slump to smithereens, listeners can’t help but be swept up either. —Leigh Checkman 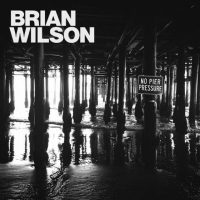 BRIAN WILSON
NO PIER PRESSURE
(CAPITOL)
Brian Wilson still looks at the world around him with a doe-eyed innocence, but with No Pier Pressure, he can abandon the surf-friendly pop with which he’s most strongly connected in order to introduce a rich, prudent reflection on the human experience. From the very first track—“This Beautiful Day,” a modern snapshot version of his classic “Wouldn’t It Be Nice”—Wilson asks the listeners to abandon expectations of what his newest album should sound like, especially following the barely-curious sounds behind 2011’s In the Key of Disney. Featuring guests like Sebu, She & Him, and Kacey Musgraves, Wilson features a wide range of beats, from the dance-pop influenced “Runaway Dancer” to the Stan Getz-tinged “On the Island.” Lyrically, Wilson writes as an older man observing his life with an aged perspective (particularly on “The Right Time” and “Tell Me Why”) with a similar solemnity as Ingmar Bergman’s Wild Strawberries. Sonically speaking, No Pier Pressure makes up his most challenging set of tunes since 2010’s Brian Wilson Reimagines Gershwin, a more than pleasant detour into the mind of one brilliant composer re-working another genius’ work. Ultimately, No Pier Pressure has the wisdom of a purposeful swan-song without any unnecessary sentimentality. —Joey Laura 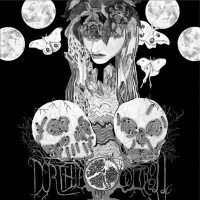 DORTHIA COTTRELL
S/T
(FORCEFIELD)
Most people might know Dorthia Cottrell as the vocalist for Richmond, Vir. doom outfit Windhand. I thought it was interesting reading an interview after their first album came out in 2011 asking why her vocals were so low in the final mix. The response was they thought of her voice as another instrument and they wanted it mixed the same as the other instruments—that’s the first time I’d heard that response, but I liked and agreed with it. By the time Soma came out in 2013, it seems they’d changed their minds seeing as how the vocals were a lot more prominent. This self-titled solo album really sheds all myths—Cottrell can really sing beautifully. The entire LP consists of just vocals, acoustic guitar, lap steel, and sitar and honestly needs nothing more. She shows off her husky vocal skills almost nonchalantly. Since these songs are much shorter than the average Windhand song, the listener can become completely enveloped in her intoxicating voice and hang on every lyric. She’s like the metal version of Lucinda Williams. Even the Townes Van Zandt and Gram Parsons covers seem perfectly placed with zero cliché factor. This release will please any music fan whether it be metal, doom or simply enchanting smooth acoustic music. —Carl Elvers 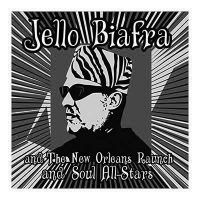 JELLO BIAFRA AND THE NEW ORLEANS RAUNCH AND SOUL ALL-STARS
WALK ON JINDAL’S SPLINTERS
(ALTERNTATIVE TENTACLES)
The back cover of this CD shows Jello Biafra’s face superimposed on Elvis’ body, in the iconic photo of the King shaking hands with Richard Nixon. What better metaphor for a once revolutionary frontman who’s become a cheesy parody of his earlier glory days? Featuring a cast of Louisiana bropunks—including Dash Rip Rock’s Bill Davis, Cowboy Mouth’s Fred Leblanc, Pepper Keenan, and the horn section from Morning 40 Federation—this rescued recording runs through a setlist of jukebox hits of yesteryear, from “Ooh-Poo-Pah-Doo” to “Working in a Coal Mine.” And while there are glimmers of true magic, such as in the smoky, slithering jam on Dr. John’s “Walk on Guilded Splinters” and a heartfelt nod to Alex Chilton with a cover of “Bangkok,” most of this album falls as flat as the recording itself. (That’s not a dig on Ben Mumphrey’s work, by the way. Apparently he had to salvage a self-described train wreck.) But does the world really need this version of the Ernie K-Doe anthem, “Mother in Law?” or Biafra’s dorky uncle one-liners? Not really. I was fortunate to catch a version of this lineup at a Siberia show last year and it was indeed quite amazing. Jello Biafra, though corny as fuck and misguided in this quest (the presser from AT boasts that “You can almost feel the grease and voodoo dripping from the walls!” to which even NCIS New Orleans groans), is still a formidable entertainer. So if he comes back to town to revive this project, by all means go see it live. As a release, however, it just feels like a giant waste of time and another Jello Biafra vanity project. —Dan Fox 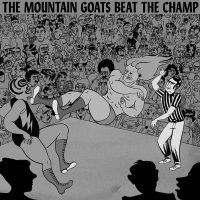 THE MOUNTAIN GOATS
BEAT THE CHAMP
(MERGE RECORDS)
“This right here is an album about pro wrestling” is what the sticker on the front of the new Mountain Goats album says. While people may scoff at this warning, you can rest assured that Beat the Champ is still full of stories of damaged and lonely individuals, finding hope in hopeless situations (a trope that John Darnielle is oh so good at). On “The Legend of Chavo Guerrero” Darnielle paints the titular wrestler as a hero who brings justice to the world, while “Werewolf Gimmick” is written from the perspective of a wrestler who is so completely dedicated to his character that he tears at his opponent’s face. The real heart of the album, though, lies in the tracks “Luna” and “The Ballad of Bull Ramos,” both of which take a look at what happens once a wrestler’s career has come to an end. The latter is sung from the perspective of Bull Ramos after his retirement, and despite all the terrible things that have happened to him (losing a leg, going blind), it is ultimately an anthem about how his name will live on forever. “Luna” depicts the goddaughter of Andre the Giant, Luna Vachon, watching her house burn down along with all the wrestling memorabilia she has carried in her life. It is in reflective moments like these where Darnielle proves once again that he is one of the best lyricists working today. —Brandon Lattimore 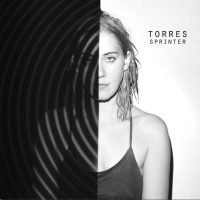 TORRES
SPRINTER
(PARTISAN)
“Strange hellos are not my bag,” Mackenzie Scott, aka Torres, croons on her second album’s opening track, proceeding to embellish on a conflicted, confessional persona with every song on Sprinter. Throwing down power chords and lyrics about being her own woman amid a deep knowledge of darkness in “New Skin” further sets Scott’s table, establishing a sense of control that she chips away at with every successive song. If this seems contradictory, it is merely a reflection of the experiences Scott herself has had in her young life. What stands out is how much older her songwriting is; it’s a wise voice she’s managed to tap into, whether it draws on a John Donne poem for inspiration or gets expansive and contemplates themes of alienation from one’s past (such is the case on the title track). One of the most compelling songs on Sprinter, however, seems like a poppy throwaway compared to the rest of the strange, splintered hellos Scott throws down, but in “Cowboy Guilt,” she lampoons and condemns the conservatism of her Southern upbringing in a bright, electronic manner. It all adds up to a stunning portrait of an artist, bringing shards of her own life to fascinating light. —Leigh Checkman 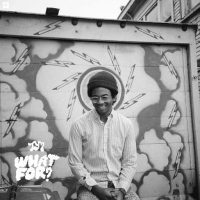 TORO Y MOI
WHAT FOR?
(CARPARK)
On his newest album, What For?, Chaz Bundick (aka Toro y Moi) finally works beyond his influences rather than allowing his music to remain the derivative red-headed step-child of Caribou and post-Strawberry Jam Animal Collective. Now on his fourth album, Bundick isn’t as married to the electronica sound as chillwave cohorts Neon Indian, and he manages to build on the sound of Washed Out’s 2013 album Paracosm—a good but not great example of what the sub-genre could do—to introduce more pop and rock influences into the song structures of chillwave consciousness. Just as STRFKR re-ignited indie-pop with their dynamic self-titled 2008 album and 2013’s awe-inspiring Miracle Mile, Bundick pushes his vocals and his instruments’ timbre beyond the droning monotones of fellow chillwave auteurs. Drawing more from yacht rock than any other genre, he reimagines various musical structures from songs by the Eagles (“What You Want” teases Don Felder’s guitar work from “One of These Nights”) and Steely Dan (“Buffalo” flirts with the jazzy start-stop of “Josie” and “Hey Nineteen”) to create a warm, radiant sound that transcends all of his influences. Unlike any of his predecessors or contemporaries, Bundick’s What For? marvelously achieves a so-far aesthetic high-point for the chillwave genre. —Joey Laura 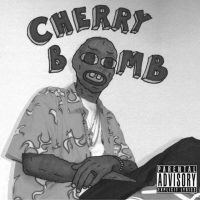 TYLER, THE CREATOR
CHERRY BOMB
(ODD FUTURE/SONY)
Almost 40 years ago, The Runaways used their song “Cherry Bomb” to assert sexual independence and express adolescent yearning. Today, Tyler, the Creator uses his album of the same name as as a boring fireworks metaphor to stand for masculine bravado in the least appealing way possible. While 2Pac used “big talk” to unveil layers of masculine vulnerability, Tyler only wants to show how little he cares about consequences. What Tyler didn’t understand was problematic about romanticizing rape (“She”) or violence against women (“Bitch Suck Dick”) on his 2011 debut Goblin is still informing his newest record. This time around, he romanticizes statutory rape (the cliché-ridden “Fucking Young/Perfect”) and terrorism (“Pilot”) in various attempts to assert some wicked sense of challenging authority when it really just looks like cocky machismo with nothing to back it up. Even his car-obsessed track “2Seater,” which includes a heartless Trayvon Martin joke, forgets the sober brilliance of Kanye West’s “Drive Slow.” He isn’t willing to show his vulnerability, but that willingness is half the battle, as Wale showed on The Album About Nothing, when he dissected social desires with great acuity. Tyler’s music continues to be the aural level of a torture-porn horror film: a contrived nightmare that inspires nothing but misery. —Joey Laura