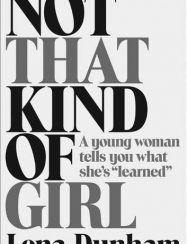 NOT THAT KIND  OF GIRL: A YOUNG WOMAN TELLS YOU WHAT  SHE’S “LEARNED”
LENA DUNHAM
(RANDOM HOUSE)
What kind of girl is Lena Dunham? Not That Kind Of Girl, in any other context,  would have readers believe Dunham is a paradox who got lucky—a girl like all other girls but with issues. Dunham’s  specific issues revolve around sleep, obsessive-compulsive tendencies, and an awkwardness in relationships with girlfriends and boyfriends that  she mines for laughs and send-ups to great effect in her HBO series Girls. Those who watch the series will have plenty more in Not That Kind Of Girl to chew on, as the book is structured as a gentle criticism of self-help tomes, with sections on Love & Sex, The Body, Work, and many lists within. Dunham is the “it” girl of the moment for a reason, though, and she doesn’t lack actually having something to say. She dives into why she isn’t awkward about showing her body, and into body issues in general, in ways that  are quite meaningful and touching. “I Didn’t Fuck Them, But They Yelled At Me” is a strong meditation on being a woman in the still heavily male world of filmmaking––all in the guise of a frivolous romp into “When I am 80” territory. Dunham finishes up with “A Guide To Running Away,” a tale of what it is to grow and change within the short yet eventful life that she has thus far lived. It turns out that, in the annals of memoir, Lena Dunham isn’t a warrior à la Maxine Hong Kingston, but hers is a unique portrait of artful muddling through life, love, and getting more comfortable in her own skin. —Leigh Checkman 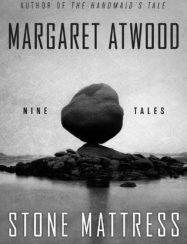 STONE MATTRESS: NINE  TALES
MARGARET ATWOOD
(NAN A. TALESE/DOUBLEDAY)
The aptly named 55th publication by the illustrious Mrs. Atwood rejects the softness of old age and presents aging characters with an edge. These are not the satisfyingly simple personalities of youth. They are complicated by layers and layers of experience, conflicting  emotions, biases, conclusions that disregard reason, and a deep subjectivity, each layer delicate and romantic but fossilized over time into stone. Mining the fragility of the aging mind, Atwood introduces us to characters whose hallucinations end up being at least as valid as any assumed reality. These are stories of ghosts not quite dead, stuck in the past, seeking revenge, obsessing over unfinished business. It’s not a hopeful collection.  There aren’t any epiphanies or answers, but Atwood’s reliably sardonic voice encourages the reader to laugh at the absurdity of existence, which can provide some comfort during this long, dark tea time of the soul. —Alex Taylor 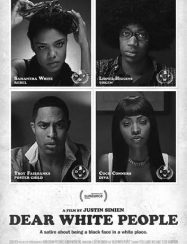 DEAR WHITE PEOPLE
DIR. BY JUSTIN SIMIEN
(CODE RED)
At Winchester University, a fictional Ivy League college, Samantha White (Tessa Thompson) hosts a radio show reminiscent of Do the Right Thing’s Mister Señor Love Daddy, her silky- smooth voice challenging the over- privileged, majority-white student body to swallow some hard truths about life as a black person in a white world. The plot revolves around Sam and three  other students trying to figure out how to navigate a cultural environment on campus that allows for a ghetto-themed Halloween blowout encouraging partiers to “Unleash your inner negro.” On the surface, it’s a comedy playing off the joke of “Post-Racial America,” but the struggle at the core of the film is encapsulated by the college’s motto, “Nosce te ipsum,” Know Thyself. How does one reconcile his or her inner- self with the expectations posed on us by each other and by society? The most satisfying and subversive aspect  of the movie isn’t an overt display of cultural injustices, but simply seeing black faces on the big screen playing realistic characters with real problems. These are some of the perspectives we’ve neglected by excluding minorities from anything but token bit parts. This movie is a taste of what we’ve been missing. —Alex Taylor 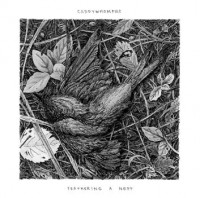 CADDYWHOMPUS
FEATHERING A NEST
(COMMUNITY)
There’s a different sort of Caddywhompus music that’s emerged  on Feathering A Nest—one that has ties to the group that made the Sonic Youth- tinged, raw-from-the-basement EP The Weight, to be sure, but one listen to Nest and the changes are melodically enveloping from the sneaky get-go. This isn’t to say the punk duo of Sean Hart and Chris Rehm have abandoned their usual noise experimentation tendencies. They’ve simply added to them, upped the quality of their  recordings, and made their music a little more accessible in the bargain. “For A Little Bluebird” sounds at first like it’s on its way to being a holdover  from Weight, before dipping right into guitar licks tinged with Zeppelin-esque metal and crisp vocals. That opener sets the tone for the rest of Nest, which features two reworked songs (“Stuck” and “Company”) previously released on 2012’s Maze Demos, and three more that flow directly into the EP’s closer, “Layers,” which recalls the band’s previous work. Rehm’s singing is the true standout on Nest, kicking in most memorably on “Company” when he throws in a litany of Bobby Darin-esque “I’m your dream lovers,” making it an experimental element all its own. This older, wiser, and tighter band has a varied, more refined, and more fun grab bag these days. Here’s to Nest’s feathering. —Leigh Checkman 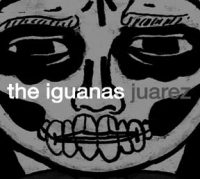 THE IGUANAS
JUAREZ
(PIETY STREET)
There’s always some part of the Iguanas’ music that will hearken back to their earliest days as New Orleans’ partying answer to the Tex- Mex, country-tinged bombast of The Mavericks and the Latin stylings of Los Lobos, but from 2003’s Plastic Silver 9-Volt Heart on, something more contemplative and melancholy has seeped into their tunes. There’s evidence of both on Juarez—the sister  recording to 2012’s Sin To Sin—with a bit more emphasis on various covers and some experiments that at their  best are stunning, at their worst are plodding. The lowest point has got to be a song called “Make That Magic Happen” that unfortunately can’t conjure up the sorcery it tries to recall; better to look for that in the rocking “Soul Kiss,” a crowd-pleasing staple of the band’s live shows. Between  those polar opposites are tunes that  run a gamut: other highs include the accordion on the Iguanas’ version of Steve Jordan’s “La Cumbia De Chon;” “Slumming,” the band’s take on the comings and goings of New Orleans’ life’s pageant; and the opening sax- swooning sinuousness of “Love, Sucker.” The best listen of Juarez seems a little out of place on the album, but once it begins, it walks you through its desolation and won’t let you go. “Blues For Juarez” is a heartfelt meditation on Mexico’s most heartbreaking city. Juarez itself is an uneven portrait of a band that’s been around many a time and place, but what gems it does have shine brightly. —Leigh Checkman 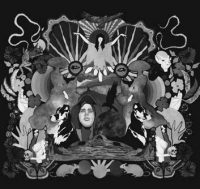 LITTLE GOLD
SPECTRAL SIGHT
LOUD BABY
Little Gold definitely own that ‘90s-alternative-rock-inspired-by- Americana-and-nurtured-on-the- pierced-nipple-of-punk-rock sound. It’s loud, jangly, and twangy. That being said, the more subtle palette will also pick up the flavor enhancing notes of ‘60s psychedelia, which are fully represented in the beautiful album art (of which one could eat a cap or two and stare at to increase the listening pleasure, if one was desirous of such experiences). It’s a perfect companion. There’s a big payoff in listening to this with headphones. Diorama-like miniature soundscapes are layered thick throughout like a wallpaper  sample book. There’s also a very dusty, desert Joshua Tree vibe, which makes it a perfect soundtrack to a road trip. It’s 11 tracks of truckstop coffeecup thumpers. No filler songs, no skips. It even has songs about driving, cars, and the loyalty of dogs—all of them are sing-a-longs. If you were fortunate enough to have been one of the tens of people who saw them at Gasa Gasa in October, it matches the face-melting, head-bobbing joy you witnessed on stage. “Passin’ Through” is the ultimate driving song. It’s almost like Calexico is covering a Lemonheads song, or vice- versa. “Spectral Sight” is as enchanting as the Wiccan who inspired it. “Victim of a Crime” is so warm and fuzzy and smile-inducing it’s like watching a YouTube clip of kittens wearing sweaters wrestling until their sweaters are reduced to shreds. The album fades away with the Royal Street busker ditty, “Bombs Away,” tying up this package neatly. —Kevin Barrios 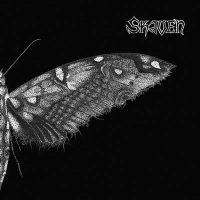 SKAVEN
DISCOGRAPHY
(SKULD)
In 1995, I decided to move to Oakland. I can honestly say I saw more shows then than any other year (about five to seven shows a week, sometimes multiple shows a day—no joke). There  were so many great local Bay Area bands playing every week: Fields of Shit (ex-Filth), Dead and Gone (ex- Blatz), El Dopa (ex- Grimple), Ojorojo (ex-Econochrist), Torches to Rome (ex- Sawhorse)… and then there was Skaven (ex-Black Maggot). Skaven sounded like a cross between Amebix, Neurosis, and Axegrinder (with Lemmy on vocals!). This five piece (two bass players—one was handicapped and walked with crutches and the other one, Matusio, was just bat-shit crazy) put out a split LP with Dystopia (Blessed are The Worms…..For They Shall Inherit This Barren Dirt! on Life is Abuse Records)  after being a band for only four months. I don’t need to tell you how great Dystopia was, but the (then unknown) Skaven side is absolute classic crust.  I wore my copy out playing it so much back then, before losing it (along with everything else) in Hurricane Katrina. I later bought another copy on eBay for $60—yep, that’s right. The sample from Dolph Lundgren’s The Punisher movie is downright awesome, plus the “Hellraiser” sample (from “Plague Wind”) paired with the lyrics: “Jesus wept, but he did not weep for me” and “With a hollow heart you carve the abscess in your soul” from “Abscess”—fuckin’ brutal! Skuld Records (from Germany) has now compiled their entire discography: the split LP with Dystopia, their Flowers of Flesh and Blood 7” and the split 7” with Stormcrow (this material was recorded in 1996 but was not released  until 2008), all on one affordable LP. Plus it comes with a fancy lyric booklet with incredible artwork, an insert with photos, a band history, and two posters. Holy shit! Skuld went all out for this release. Skaven managed to do one tour  in late ‘95/early ‘96 with Dystopia (they played in New Orleans at Brice White’s house), then called it quits in 1997. Various members went on to play in Asunder and Medication Time. Skaven was a classic crust punk band that never  got their due. Oh, the “Sweet suffering.” —Carl Elvers