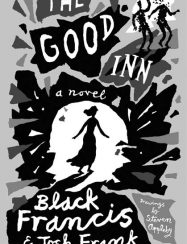 BLACK FRANCIS, JOHN  FRANK, STEVE APPLEBY
THE GOOD INN
(IT BOOKS)
In 1908, the simple mechanics of the zoetrope and the science, chemistry, and fledgling art of still photography had combined in a new technology.  The moving picture—and its emerging artistic boundaries—were about to be blown open with the making of the world’s first narrative pornographic film. A little over a century later, the Pixies’ Black Francis and writer/film enthusiast Josh Frank got together to create a screenplay for music Francis was writing that was inspired by La Bonne Auberge, that film from 1908. The Pixies’ Trompe Le Monde cover artist Steve Appleby contributed drawings based on the story, and thus  the screenplay was reworked into The Good Inn, a fantasy-tinged novel that explores the very nature of art, cultural taboos, and the early history of film in France. Indeed, the very fabric of reality is bent and eventually burned. The main male character of the porn film—a man known as Soldier Boy—discovers far more than he bargains for when he stops at the bonne auberge, makes love to the innkeeper’s daughter, and realizes there is a hole in the wall through which he can see his doppelganger. The Good Inn would make an incredible film if done the way the novel writes and draws it out, one that would be nearly as boundary- blowing as La Bonne Auberge must have been, but what we are instead left with is a pastiche of a book, a story treatment stitched together that is only a bit greater than its meager parts. —Leigh Checkman 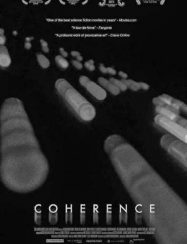 COHERENCE
JAMES WARD  BYRKIT
(BELLANOVA/UGLY DUCKLING)
A yuppie dinner party gets a bit more interesting as “Miller’s Comet” passes overhead in the night. Cell phonesstop working, the internet goes down, and power goes out across the neighborhood, except for a solitary house shining in the distance. Two members of the party volunteer to pay a visit to the lighted house, and that’s when things become truly  strange. The rest of the film unfolds  as an exploration of Schrodinger’s most famous thought experiment. While the scientific and logistical aspects of the story may or may not be entirely satisfying depending on your knowledge of quantum physics and/or attention to plot details, it’s refreshing that the film is attempting to make an intellectual exercise entertaining, and the actors’ improvisations manage to turn a micro-budget thriller about parallel worlds into a story grounded in real, human experience. —Alex Taylor 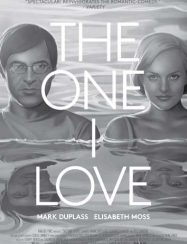 THE ONE I LOVE
CHARLIE MCDOWELL
(DUPLASS BROTHERS PRODUCTIONS)
In the opening scene, Ethan (Mark Duplass) and Sophie (Elisabeth Moss) explain to their therapist that they want to rekindle the magic they felt upon first meeting each other. He adamantly recommends a very specific getaway, and suddenly the downhearted couple is trying to make another go of it out in the country, leaving the reality of their everyday lives behind them  in more ways than one. It’s a darkly comedic “what if ” scenario that could be cathartic for anyone who has ever struggled with the mundane moments of a long-term relationship, but if you’re looking for an answer, this isn’t the place to find it. The characters don’t actually work through their problems, but Moss and Duplass are deliciously charming, self-deprecating, and funny. And laughing with your loved one over some post-movie hors d’oeuvres might be just the thing to bring a bit of magic back into your own relationship. —Alex Taylor 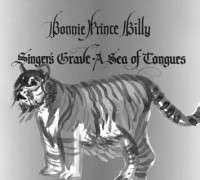 BONNIE  “PRINCE” BILLY
SINGER’S GRAVE A SEA OF TONGUES
(DRAG CITY)
Nearly as prolific as Bob Pollard, more enigmatic than Jack White, so uneasy with interviews he requests that  questions be of a nature that allows him to answer either “yes” or “no”—the quirks and eccentricities of singer/ songwriter (and occasional actor) Will Oldham threaten to eclipse his musical output as roots rock musician Bonnie “Prince” Billy. While Oldham-as-Billy confounds music journalists with his persona(lity), he keeps his head down and continues to blaze an intriguing trail with his releases. The latest seems to draw upon some of the lyricism of Kris Kristofferson, mixed with a wistful slide guitar at first, developing into at times fierce vocal duets (the slightly desperate, aspirational “Quail And Dumplings”) and stirring gospel-tinged backing vocals (“We Are Unhappy” and “Old Match.” All this finally giving way to complex musings on relationships and life itself in the final songs of Singer’s Grave A Sea Of Tongues. The worlds that Billy creates in his music get more wisely convoluted with the passing of time. Singer’s Grave shows his creativity is nowhere near dead yet. —Leigh Checkman 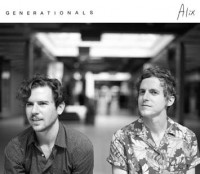 GENERATIONALS
ALIX
(POLYVINYL)
A confession: I want to like Alix far more than I do. It isn’t as though Grant Widmer and Ted Joyner have slacked off in their synth-pop constructionism—the album dances  deftly, deceptively, saccharinely out of the gate with “Black Lemon” and “Gold Silver Diamond,” both almost entirely built of electronic sounds backing Widmer’s and Joyner’s lead vocal work. But the tracks hit quicksand once a guitar hits the mix in the ironically  named “Reviver;” the unevenness continues from there. At times, it’s as though Generationals are afraid to let the rawness that burbled beneath Heza and hung farther out on Actor-Caster seep into their latest songs, which is possibly the result of their being produced by Richard Swift, known for his work with The Shins and Foxygen. It peers out a little in “Welcome To The Fire,” when the keyboards run a little free near the end. Considering Alix’s themes of finding steadier ground on which to stand in life and relationships, the overall feel and sound of Generationals’ fourth offering is unsure in a way that doesn’t add up to a great offering from this duo. —Leigh Checkman 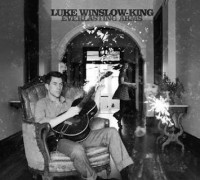 LUKE WINSLOW-KING
EVERLASTING ARMS
(BLOODSHOT)
“Timeless” is a word that often gets tossed around with little regard for its actual meaning, but it truly applies to the music of Luke Winslow-King.  His arrangements consist of slide guitar, sometimes piano, sometimes Dixieland horns, sometimes fiddle or bass, and sometimes drums—and often these instruments are played much in the same style they would have been 80 or 90 years ago. But somehow the songs always sound fresh, and that is especially true on Winslow-King ’s latest effort, Everlasting Arms. Hailing from Cadillac, Michigan and classically trained, it seems that the South is finally taking the hold on Luke’s personality that it’s always had on his music. Prior to this record, Winslow- King ’s slide guitar playing had been impeccable, if a bit conservative. Here, on tunes like “Swing That Thing,” we hear a new let-it-rip attitude come through in Luke’s guitar playing. “The Crystal Water Springs” features a Mississippi Hill Country drum line, and Hill Country drums are the most swaggerrific. Winslow-King ’s tunes  have always been fun, well-penned, and well-played, but they’ve often been a bit aw, shucks-ish. He’s just kickin’ it on Everlasting Arms, and it sounds awfully good on him. Catch these cats around town, especially for the record release  party at The Blue Nile on October 17th. —The Rev. Dr. Daniel P. Jackson 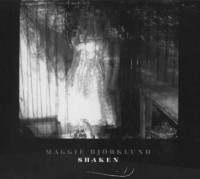 MAGGIE  BJORKLUND
SHAKEN
(BLOODSHOT)
One doesn’t run into many female pedal steel guitar players, fewer still that are from Copenhagen; but then, one doesn’t run into many musicians of any stripe from anywhere who possess the melodic sense and technical prowess of Maggie Bjorklund. Available in the U.S. this month, Shaken is Bjorklund’s second album on Bloodshot Records, and it’s absolutely magnificent. Written over the last few months of Bjorklund’s mother’s life, this album drifts through weird empty spaces that sound nothing like any steel guitar music you’ve heard before. If there were deserts in Scandinavia, they would sound like this. Themes of loss and loneliness understandably permeate the eleven songs here, with tunes like “The Unlucky” and “Teach Me How to Say Goodbye” dealing quite openly with Bjorklund’s emotions over losing a parent. “Missing at Sea” is a hypnotic instrumental that could appear on the soundtrack to Joss Whedon’s Firefly, her pedal steel ringing high and lonesome for sure––but rather than riding horseback through the Badlands, she’s riding a space shuttle orbiting Jupiter. The emotion that comes through in Bjorklund’s singing and playing is brutally engaging. It is impossible to hear these songs without feeling something, and that is something special indeed. —The Rev. Dr. Daniel P. Jackson 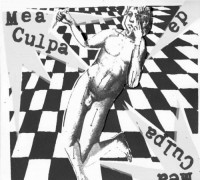 MEA CULPA
EP
NO  CABANA  (SELF RELEASED)
This band has been somewhat elusive for me. I was given their demo tape last year to review, but it was an old cassette that had been overdubbed, so it squealed and dragged and was basically unlistenable. I eventually bought another copy of the tape at Iron Rail, but by then I thought it was a little too old for review. I also had some trouble finding this 7” (I tried to purchase one directly from the band after a show at Siberia, but they didn’t bring any), but managed to find one in the Noxious Noize! distro (thanks Christion!). Anyway, the band has been doing their version of post punk/dark wave (death rock, whatever you want to call it) in New Orleans for a few years now. Comparisons to the Wipers and the Replacements have been noted in MRR, but I liken their sound closer to the Estranged, with some Gang of Four  guitar riffs and early Cure bass lines mixed in. I’m not sure if he’s on this recording (since there’s no mention of band members or lyrics included), but I really like the addition of Skillet (from the excellent Crackbox) on second guitar. I think he brings a fuller sound to an already tight line-up. —Carl Elvers 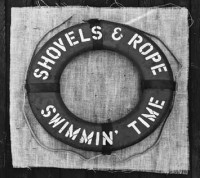 SHOVELS & ROPE
SWIMMIN’ TIME
(DUALTONE RECORDS)
We make no bones at Antigravity about our blatant, fan-girl level of love for Shovels & Rope. Since first hearing  Cary Ann Hearst and Michael Trent bend the laws of physics and make an intimate duo feel like a stage full of sonic wonder, we’ve been sold. It was with fingers crossed and breath held that I dove into their newest release, Swimmin’ Time. Album opener and single “The Devil is All Around” is a great representation of what S&R do so well: marry moments of stillness,  pregnant with energy, to knee- slapping, toe-tapping singalongs. It’s the perfect flag bearer for the record,  which sees them veering from classic ‘50s rock’n’roll to traditional folk, vintage country-western and even a touch of Dixieland jazz. “Evil” will be a barnburner live, with its deeply rooted  stomp and that devious snarl that’s just so sexy and dark. “After The Storm” is a sprawling opus, the longest track at nearly six-and-a-half minutes, its instrumentation bare bones. The focus, rather, rests on the powerful vocal melodies of Cary Ann and Michael, which crescendo in a sustained note  that is pure goosebumps, a bellow all crackled and raw around the edges.

Not folks prone to taking themselves too seriously, they follow with “Fish Assassin,” which is all thigh-slapping percussion and rapid fire vocals. The album’s subject matter is as varied as its styles: “Stono River Blues” is a true  traditional tune, inspired by the Stono slave rebellion of 1739, while the title  track is a sparse rumination on the human condition and the eventual ugly end of it all. The instrumentation is also more flush this time around, incorporating keys and a heavier  helping of harmonica. The apex of these new sounds has to be the Tom Waits-esque “Ohio,” which feels like the dirge at the beginning of a jazz funeral  and features robust horn work. My only complaint would have to be that  album closer “Thresher” just doesn’t have the oomph to bring the experience to a really satisfying close. Perhaps it’s a grower and I’ll learn to love it more in time. Until then, I’ll wallow in the goodness that is the previous eleven tracks and continue to wrap my eardrums in such furious bliss. —Erin Hall