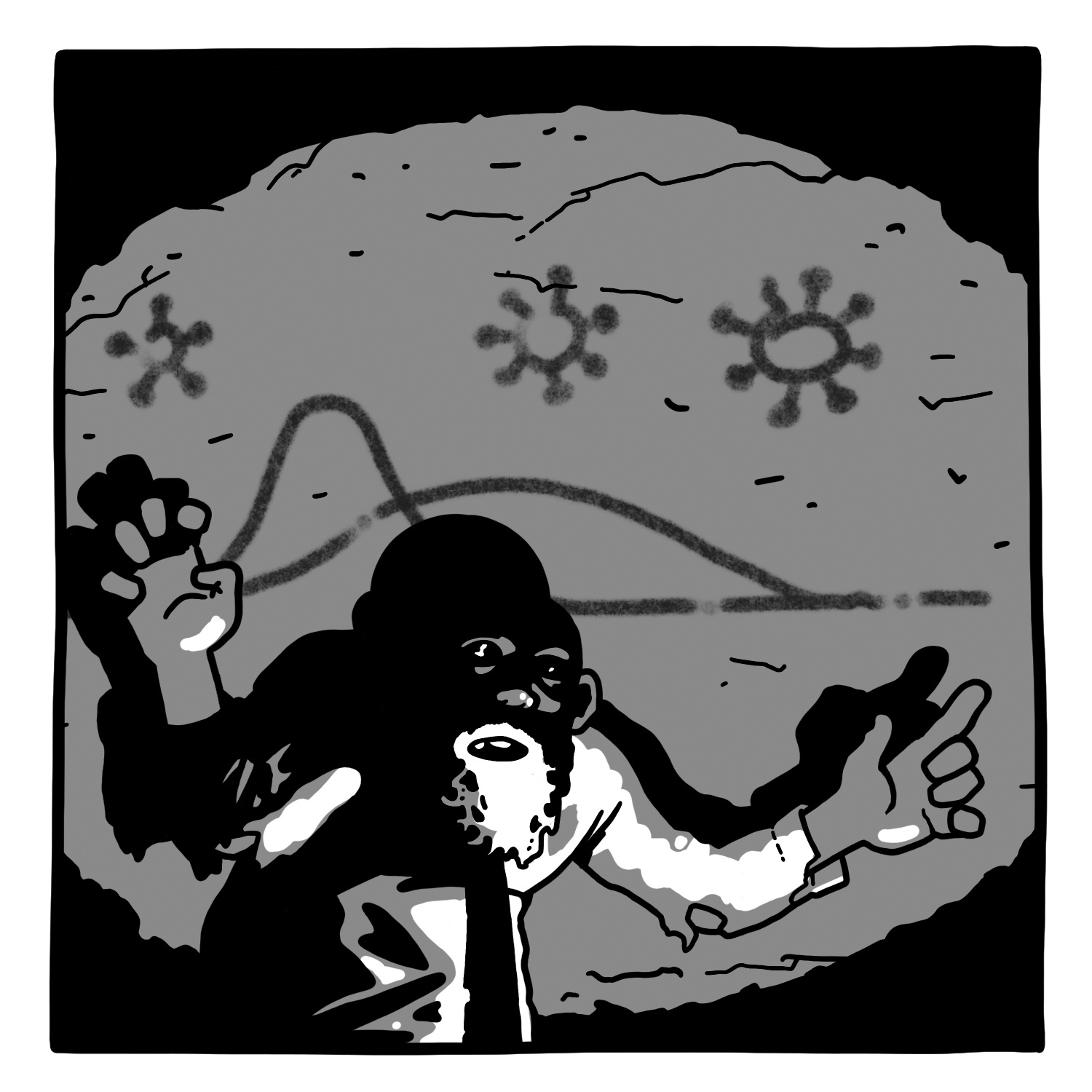 The year is 2060. I greet the morning dew with a scowl, having again been bodied out of the fire pit’s radius. Unable to risk upsetting them, I go and chop the old growth. And besides, I don’t need much, happy as I am to lick the nutria fat off the skewer and toast the pine tree’s inner bark. I know why I’m here: I’m kept around for my stories about the Old World. Mid chop, I feel a light plink, a pine cone zips and ricochets against my pus-caked ankle. I grimace while they laugh and yell, “Get back here and tell us again about how they thought they could pray their way out of a pandemic.” I do as I am told. The story is one of their favorites, and I supplement the epic with charcoal-drawn curve graphs on the cave’s wall. Sensing their boredom, I feverishly continue through the hits: the one about the man who we respected for controlling all the world’s goods, the palms we crafted from lithium and carbon graphite so that we didn’t have to look at the sky to know when a storm was coming. They leave me for their morning hunt. I bend my head low and inhale smoke, a minor annoyance weighed against the warmth of the few embers they’ve forgotten to douse.

“Hey Grandpa, come tell us a story,” they bark upon return. This mocking honorific is reserved for their most vindictive moods. They’ve added another Old to their entourage. He’s not an Old like I’m an Old but he’s clearly old enough to remember the Old World. He looks at me like he knows me but that’s impossible; nobody’s so much as uttered the words Morris Blart since the ANTIGRAVITY bunker was torched in the wake of the Q-urinating-on-an-American-flag cover incident.

I start where I left off but I’m quickly interrupted. “We want a new story, we want to know how you really feel about the Old World” they say, a conspiratorial glance shared amongst them.

“What is there to say? I renounce it all but you know that, friends,” I whimper. Who is this new Old and what did he tell them?

“Tell us about the United States Constitution. Was it a good thing or was it bad?” the new Old shouts.

“Well, it depends. On one hand—” I try to catch myself but it’s too late—an unshakable reflex from my years of soliloquizing on the contradictory nature of the U.S. legal system in backwater parish courthouses. And just like that, I’m caught. “Let me clarify. Yes, most of it was bullshit—” I’m backpedaling but there’s a voice from within which can’t be silenced: “but I have to say, I still kind of like the First Amendment.” From the corner of my eye I see the new Old hunched over the embers, trying not to sneeze as the smoke tickles his nostril hair; my final memory before the mallet crushes my skull.

Admit it, you didn’t think it could get any more Louisiana than the Governor’s sheriff brother suing China for allegedly creating coronavirus in a lab. And yet here we are, observing the City of Lafayette sue a meme page administrator for making a satirical Facebook post about Antifa invading the tony neighborhood of River Ranch in Lafayette. This lawsuit has already been reported on extensively and excellently in the local papers but in brief: John Merrifield, who started the cajUUUn Memes Facebook group, set up a Facebook event called Antifa Takes River Ranch. In this invite he reminded attendees that “[t]he takeover will begin with a traditional ANTIFA flag-burning ceremony which will be subsequently extinguished with ANTIFA spit and NAZI tears.”

As news of the event started to spread online, 37-year-old Lafayette mayor, lawyer, and humorless dork Josh Guillory issued a series of statements acknowledging that even though the event was likely a joke, the City would nevertheless be staked out to tactically ascertain the location of the insurgency. Video footage shows the rally as being approximately 10 police cars in an empty parking lot. About a month and a half later, Guillory got the City to sue Merrifield under the theory that he was acting negligently and that he caused false communication with the intent to cause an emergency response. False emergency communication is a crime that could lead to five years in prison, which I supposed the City could still charge Merrifield with if he appears in Louisiana to defend his civil suit (Merrifield currently lives in New York), and in so doing turning him into the patron saint of memes.

Merrifield is handling the situation about as well as can be expected, trollishly and astutely contrasting police overreaction to his “hoax” to the municipality’s inaction after the police murdered Black resident Trayford Pellerin. However, we shouldn’t allow Merrifield’s ability to take it all in stride overshadow what is really happening here: a mayor of a sizable city siccing lawyers on an online shitposter to stifle his political speech.

The cancel culture debate is a tired one and largely attenuated from the “free speech” contemplated by the U.S. Constitution. Mostly, when the discourse turns to cancel culture, it’s not concerned with the State unjustly interfering with a person’s free speech but, rather, what is the appropriate market or social consequence for speechifying. What is happening in Lafayette, on the other hand, is precisely what the framers were rightly concerned about: a mayor with a stick up his butt who can’t take a joke, wielding the power of the State to try to silence detractors.

This case is almost certain to be dismissed as frivolous. Yet, even if they were to win the “less than $75,000”—the exact amount of money specifically requested to avoid having the case removed to federal court, where it would be heard by a slightly more intelligent and very much more unelected judge—they know very well that a neckbeard like Merrifield won’t be able to afford to pay. The mayor is not bringing this suit to collect money for police overtime spent defending River Ranch (his claim) but instead to send a message: if you make a joke or support an ideology which I don’t agree with politically, I will do what I need to do to make you regret it. Exactly the type of conduct by a public official that the First Amendment was drafted to protect against.

Guillory is a lawyer who knows what he’s doing is unconstitutional and he should (but won’t) be recalled, if not disbarred, for the stunt. Lafayette taxpayers should be furious that their money is being squandered on trying to intimidate Facebook trolls instead of housing Hurricane Laura evacuees. But there is one winner here: whichever lawyer was lucky enough for Merrifield to retain them. There’s a big pay day ahead when the suit gets tossed and the attorneys’ fees get collected. 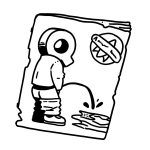 Morris Blart has no affiliation with and is not a representative of billboard lawyer and handsome elder Morris Bart. And while Morris Blart is definitely 100% a lawyer you can trust, this column does not constitute legal advice. If you have any cases, ethics opinions, funny depositions, etc. that you would like to see covered in this column, please send leads to MorrisBlartandAssociates@gmail.com