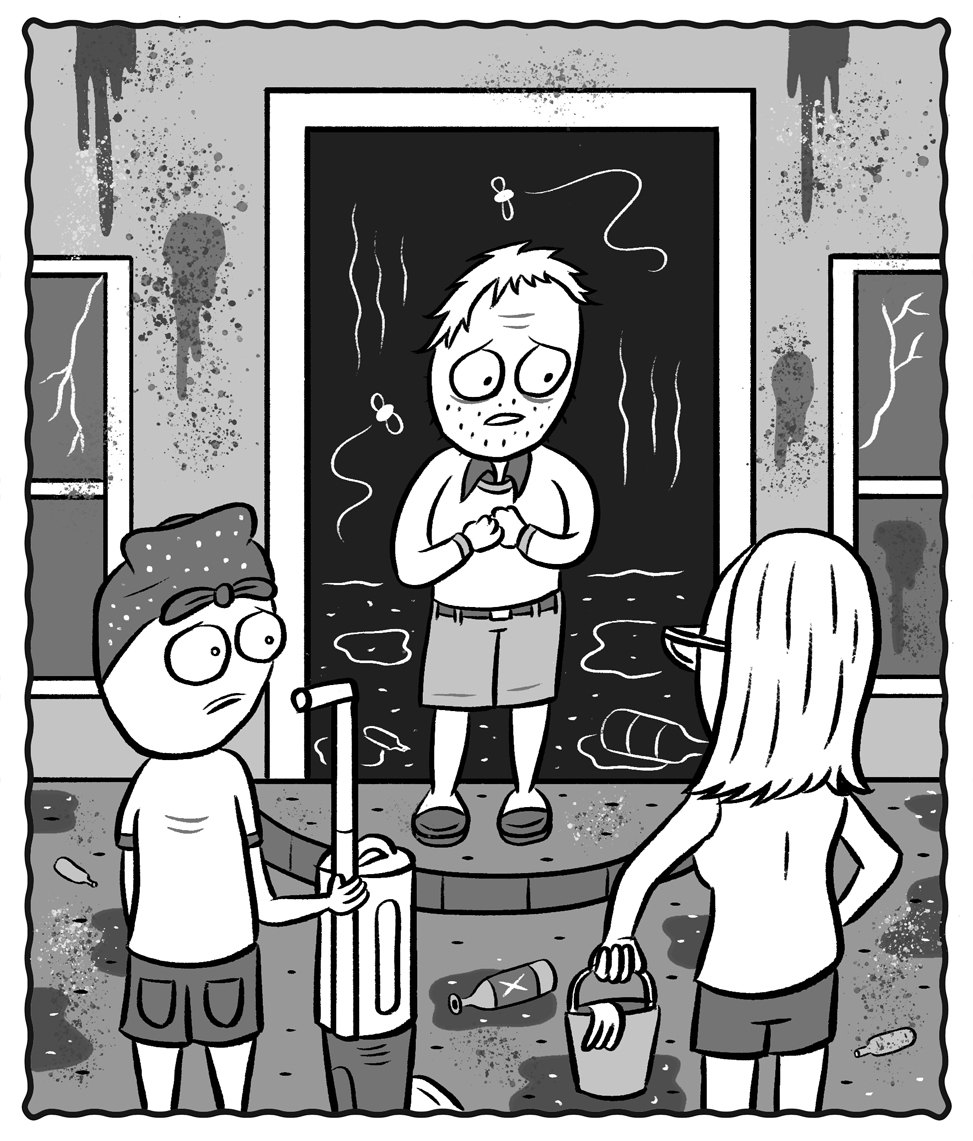 Phew, time flies doesn’t it? I can’t believe that it’s been three months since I last communicated with you. I’ve missed you all so much! BUT, I have been busy: cleaning for money all the time, celebrating Mardi Gras (dang, it was a glorious day, am I right?), and now, being a conscientious abstainer for Lent. As far as the cleaning hustle goes, I’m always thankful for lots of good clients that help support this endeavor we call “living in a capitalistic society.” Le sigh.

I’ve definitely had some big financial slumps in the past and have cleaned some grotesque places for yucky people that I would not, in a million years, take on today to make ends meet. Some of these terrible jobs have become legendary stories amongst my friends and me. I’d like to share one such feces-frosted gem with you now. So friends, I hope you enjoy this Tale (plus one important tip) From Theriot.

Way back in 2015, I was in quite a financial pickle: Things were very slow with my business, and the iron shackle of debt attached to my foot was quickly dragging me into the murky depths of Negative-Bank-Account-Balance Bog. So, you know, I had to do what I had to do. In this instance, that meant cleaning… wait for it… a frat house. Yes, ladies and gents, I had to enter rich, entitled, white boy heaven—otherwise known as working class cleaning woman hell—and scrub some fraternity bro filth. I will not mention the name of this fraternity, as I don’t want to ruffle any feathered bro hair, but I can give you a hint: I spy with my little eye a shabby looking mansion on Broadway with a huge, red stairway that acts like an arrow leading the eye directly to the eponymous Greek letters that adorn the siding above the porch.

Anyway, this little adventure began when I received a call from a young man whose voice sounded like a mixture of James Carville and Spicoli from Fast Times at Ridgemont High. I actually didn’t answer the phone when he called, so he left a voicemail. And almighty Lord up above, do I wish that I had that voicemail. I also don’t remember his name, which is a shame, because I bet it was some perfect old money, modern-ancestral name amalgamation. Since I don’t know his name, I’ll call him Lodge (pronounced “Lohdge”).

In the message that I received from Lodge, there was a mixture of desperation and hungoverdness. According to Lodge, the fraternity had a big mixer the previous night with their sister sorority (FYI, I found this article—collegefashion.net/college-life/sorority-mixers—that includes tips for new sorority sisters about going to mixers, and it’s incredible). The condition of the house after this particular party was worse than usual due to rainy weather. He said the bros and sisters had tracked mud all through the house. Lodge offered what seemed like a fair amount of money and said that the job would be “easy.” In my heart of hearts, I knew that he had no idea what the difference between hard and easy work was and therefore had no understanding of the kind of labor this particular cleaning job would entail, but I decided to take it anyway.

An hour later, my former employee and witness to this escapade, Benjy (shout out to Benjy Ferree, amazing singer-songwriter and cartoonist), and I knocked on the door of the frat house. The blonde, sunburnt, surfery, golf short-clad Cajun bro that was Lodge answered the door. When Lodge opened his mouth, we were greeted with an accent to which the phone had done no justice. Each dribbling word massaged our eardrums and made it nearly impossible to stifle our laughter. His weird New Orleanian-Venice Beach hybrid accent was so magical that Benjy kept trying to record it. Unfortunately, he was never able to capture this surfratbro patois lightning in a bottle.

Lodge turned out to be genuinely sweet, and I could tell that he was embarrassed by the state of the house. I could also read the guilt all over his face as he showed us around. He had low-balled me, and he knew it. As I predicted, the job was much, much, much, much, much, much worse than Lodge described. Yes, the floor was coated with mud, but not just mud. There was also a thin layer of various liquors on top of the mud and a sprinkling of vomit on top of that.

The bar and much of the furniture was also somehow coated with the same muck. I wish so badly that I could tell you every gory-glorious detail about this Schlitz-show of a cleaning, but I’ll only be able to give you the highlight reel of what I gleaned about university Greek life shenanigans through this cleaning:

While there was much blood (not really), sweat (most definitely), and tears (a few) involved in doing this job, the disgusting adventure did teach me four important lessons:

How to clean up vomit: Use a paper towel (or a cloth towel if you want to be eco-friendly like me) to remove any solid chunks from the gooey hurl. If this vom happens to belong to another person, you’ll also want to wear rubber gloves; I’m pretty sure I don’t know anyone that likes stranger barf on their hands. I would even suggest you wear a face mask, because puke smells real bad and it would be a bummer to barf while cleaning up barf. I’m going to advise you to throw the spew-covered cloth towel away, but if you must keep it, hose it off outside, put it in a bucket filled with half warm water and half vinegar, then hang it in the sun to dry. You can put it in the regular wash after that. Now, sprinkle baking soda over the remaining biley saliva, and let it sit for 15 minutes. The powder should absorb the liquid, making it easier to remove. Once completely dry, you can sweep or, if on carpet, vacuum it. Next, fill a spray bottle with half white vinegar and half water. Spray this solution on the vom stain, let it sit for about 20 minutes, and then wipe this up with a dry towel. Make sure to properly dispose of paper towels if you use those (sealing them in a plastic bag before throwing them away). 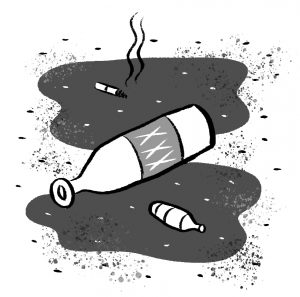