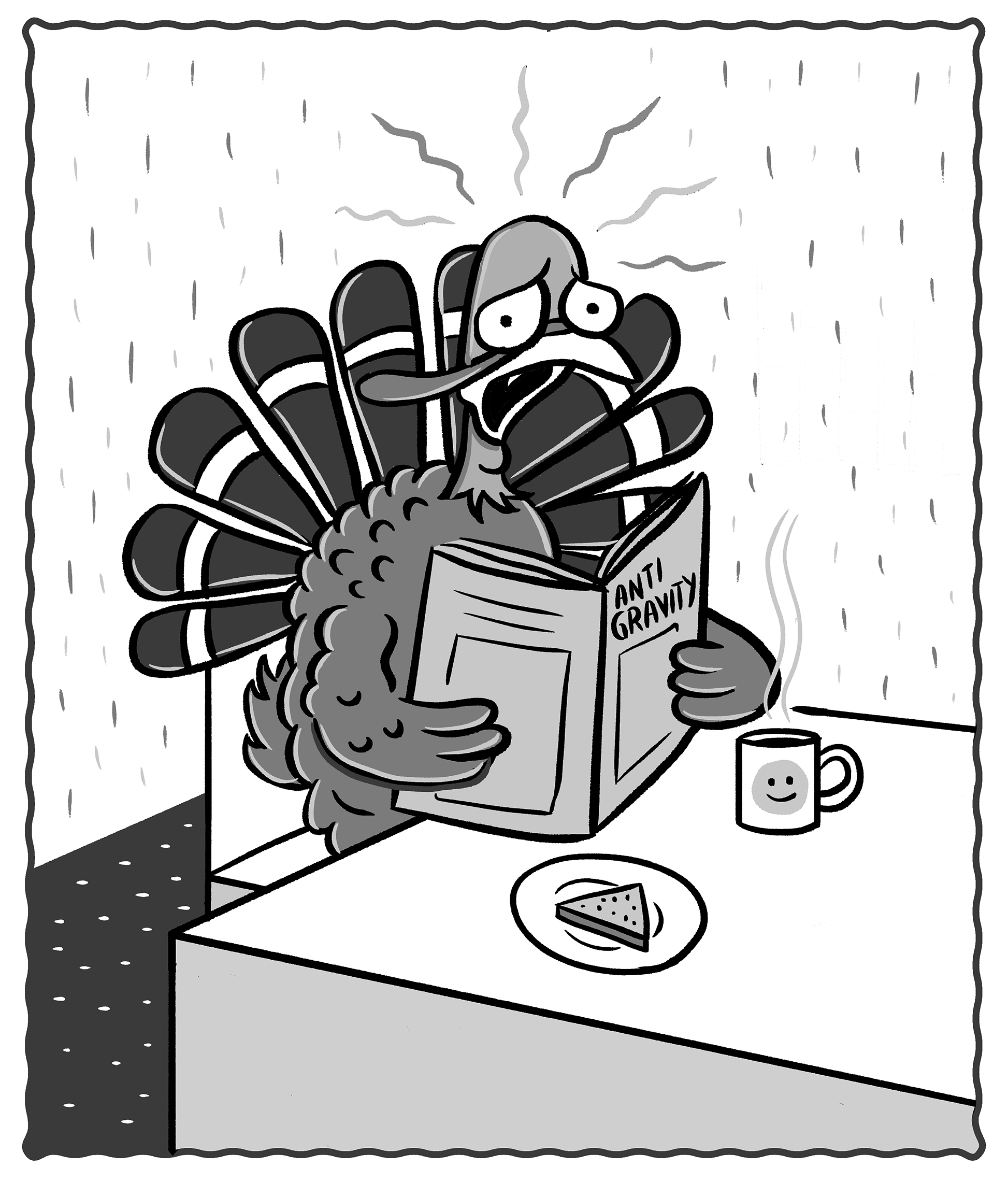 Turkeys, am I right? Man, November is not a fun month for this fluffy fowl, for it is in November that we humans traditionally murder and chow down on them. Try as they might, domesticated turkeys (the ones that usually end up as the main course at our Thanksgiving feasts) are aerodynamically challenged and thus don’t really have a chance against their captors. Wild turkeys can fly, but usually do so close to the ground, which again makes them easy prey for a hunter with a vest full of turkey loads (turkey load is the type of birdshot used to kill turkeys; I think it sounds hilarious, so I had to share it. There are articles online about the right-sized turkey load). Turkeys are called turkeys because of a good old case of mistaken identity. An African bird called a guinea fowl was brought to Europe through North Africa by Portuguese traders. Since the bird came to Europe by way of Turkish lands, the Europeans called it a Turkish chicken or Turkey cock (tee hee). When the Europeans came to North America, they encountered a bird that looked very similar to the Turkey cock (from the family Numididae), but this North American bird was actually from the family Phasianidae. Both of these birds stem from the order Galliformes, so, you know, understandable mistake. In the end, this guinea fowl-looking North American bird was given the name Turkey, but it was a Yankee all along! Anyway, I bring all of this up because I think that turkeys deserve a little respect for all they’ve done for our tummies throughout the years. This Thanksgiving, let’s pour one out for the star of the show. P.S. To prevent dying of Salmonella poisoning, I suggest sanitizing your bird before cooking it by bathing it in a large stock pot filled with a 1/2 cup vinegar and two gallons of water and rubbing it inside and out for about 10 to 15 minutes. You’ll want to rinse the turkey in cold water in the sink after washing it. Be sure to clean your sink and counter well with a vinegar and water spray containing a few drops of dish detergent before and after the rinse, to prevent any cross contamination. OK, now I’ll talk about cleaning.

I poured gravy on my antique tablecloth. How do I clean the cloth and not leave a stain?

Whoopsy, ya dripped! Your best bet for preventing spilled gravy from leaving a stain is to slop it up ASAP. The first thing that you should do after that dollop of sauce hits the cloth is to grab a spoon and scoop up as much of the spill as possible. Next, soak the stain in cold water to loosen those greasy gravy particles from the fabric. Lightly wring the cloth out. DO NOT SQUEEZE TOO HARD—your objective is to release the sauce, not smoosh it into the fabric more. Now lay the cloth on a flat surface. Make a solution of 1/4 cup clear dishwashing liquid and a few drops of ammonia. Caveat: I hate the way ammonia smells and I pretty much never use it. It’s not necessarily eco-friendly, but it’s also not an Earth-killer either. Ammonia is a natural part of the nitrogen cycle. It’s produced through the decomposition of plant and animal waste: think cat pee smell. But ammonia is also a chemical that should be treated with respect and not monkeyed around with. I suggest that if you have kids or pets, you store ammonia in a place that is inaccessible to them. Also, don’t take a big whiff of the stuff; your respiratory system won’t enjoy that at all. Pour enough of the solution onto the fabric to cover the stain. Remember that spoon that you scooped the gravy up with? Clean it and then tap the fabric with the back of it. The tapping will help to get your solution deeper into those fibers. Now, throw the cloth into your washing machine filled with the hottest of hot water and the recommended amount of an enzymatic clothing detergent of your choice (The enzymes will help break down those gravy proteins). I suggest Rockin Green Active Wear Detergent. Make sure that the stain is gone before putting the cloth into the dryer. If the stain is still there, repeat the whole procedure over, but include a few drops of the enzymatic detergent during the pretreatment process. Don’t let this spill worry you too much. It’s all gravy, baby.

I am building a house. What would you suggest to include or not include in the kitchen, bathrooms, and other areas to make cleaning easier?

Oh man, you have no idea how excited I am about this question. As my former landlord Lee used to say, “I have a bone to pick” with the use of certain building materials in homes that make my job and your life more annoying. Don’t worry, I have some alternative ideas. 1: Marble. I’ve noticed more and more marble being installed in homes, mostly in kitchens and bathrooms. While marble is pretty, it is also delicate, and a delicate countertop is not necessarily something that you want in your kitchen or bathroom. Actually, you definitely don’t want it. It will get damaged—quickly. Marble is composed of calcium carbonate. When acidic food or beverages (citrus, tomatoes, coffee, wine, the lactic acid in milk, certain condiments… the list goes on and on) drip onto good ol’ CaCO3, a chemical reaction occurs, whereby the acid is absorbed and neutralized. While the absorption-neutralization reaction of acid and calcium carbonate is great in antacids (yep, those contain calcium carbonate), it etches the marble. You know all of those cloudy, dull marks that you see on your marble countertop? Those are etches. You can get the etches out with baking soda for minor cases or by buffing for more extreme stains, but that’s time consuming. Also, because of the high porosity of marble, it readily absorbs all of your kitchen and bathroom bacteria. Yay! If you decide to go against my advice and install marble, please seal it. Building OG Bob Vila has kindly listed and rated sealants on his website (bobvila.com). A good alternative to marble is quartz. According to the Minerals Education Coalition, “As a mineral name, quartz refers to a specific chemical compound (silicon dioxide, or silica, SiO2), having a specific crystalline form (hexagonal). It is found in all forms of rock: igneous, metamorphic, and sedimentary. Quartz is physically and chemically resistant to weathering.” Quartz is non-porous, so it resists staining, won’t harbor yucky bacteria or viruses, and is super duper hard and therefore more durable. Also, quartz countertops are considered “engineered stone,” created by combining approximately 90% ground natural quartz and other stone with about 10% polyresin. Guess what that means? This countertop comes sealed, so it’s ready to rock and roll (tee hee). 2: Traditional shower heads. Traditional shower heads make cleaning showers extra annoying and make showering boring. For cleaning, detachable heads are the way to go; they are a godsend. When I see one in a bathroom that I’m cleaning, I say to myself, “Greek god Hygieia, thank you for bestowing this glorious cleaning tool upon me.” For showering, detachable heads give you a much more versatile and exciting experience! Anyway, this type of shower head makes rinsing off dirt, hair, and the cleaning product residue that is left over after you banish this funk a cinch to wash away. Imagine trying to wash dirt off the outside of your home with just a spigot and no hose, cupping the water in your hands and throwing it at the house. That would be really annoying, right? Well, it’s the same level of annoyance having to clean shower walls off with just the bathtub faucet and a traditional shower head: You have to use your hands or a cup to rinse everything off. Bummer. 3: Matte paint. I don’t understand this choice of paint at all. I think it lacks pizzazz! It’s just a rough texture with a dull look. Another thing about it that perturbs me is that its rutted surface holds onto dirt with an iron fist. When cleaning, you really have to use all of the grease in your elbows to get the filth off. I often have to use my homemade sanitizer spray, a scouring pad, and Bon Ami (all-natural cleanser) to make any progress. Sometimes no amount of scrubbing will get rid of stains. For my money, I’m buying semi-gloss paint. Semi-gloss has a smooth finish and dirt usually slides right off with just a cleaning solution and a rag. I promise. 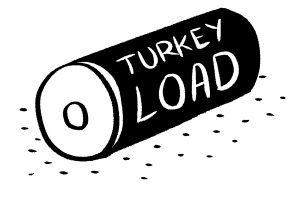